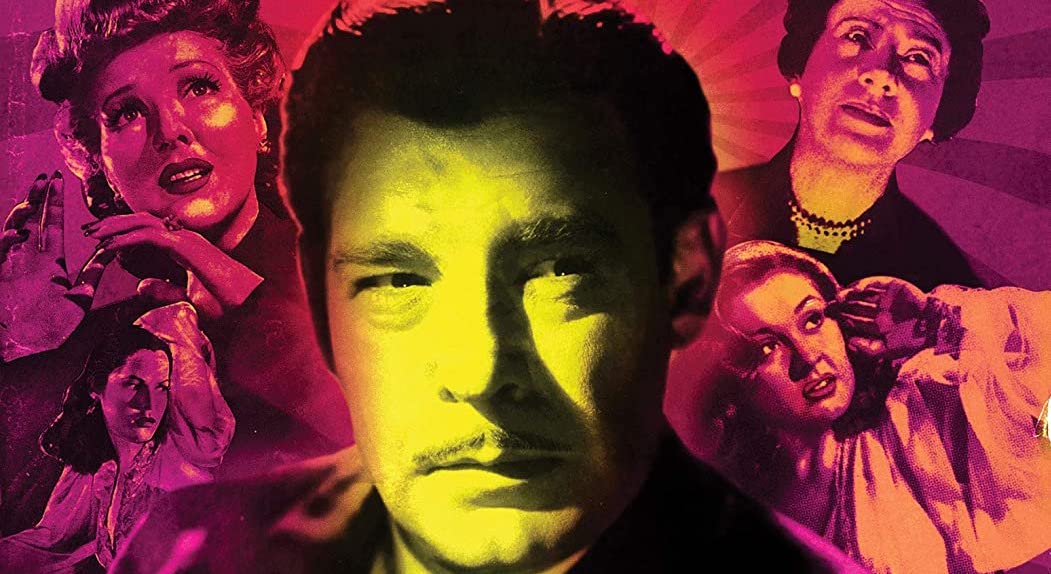 A stellar collection of six creepy mysteries. Mill Creek’s treatment is way above average and the bonus features are excellent.

A stage mentalist and a discredited plastic surgeon are involved in mysterious goings-on in an eerie wax museum.

A mesmerist who goes by the stage name Gregor the Great (played by Lon Chaney Jr.) is in the middle of a performance in front of an audience, when he gets angry at a drunk heckler and calling the man up to the stage to use him as his volunteer, he’s shocked when he hypnotizes the man … to death! After a brief police investigation rules the death a complete fluke, Gregor is wracked with guilt about it, and retreats on a sabbatical, even shirking his engagement to his fiancé just to get away. He goes to live in a spooky wax museum where he know he won’t be bothered, except strange things are happening at the museum. The tableaus of weird and ghastly murder scenes amongst the wax figures, as arranged by the skittish plastic surgeon who runs the place, begin having more lifelike features, and when some people go missing around the area, Gregor becomes both the suspect … and the investigator when the police are baffled by the mystery.

An adequately paced one-hour murder mystery with an intriguing plot, The Frozen Ghost has an appropriate amount of spooks and ponderings from the protagonist, and it all wraps up quite neatly, leaving the viewer ready for more Inner Sanctum mysteries. Directed by Harold Young.

A chemist is lured back to his elite profession of creating vaccines and medicines for a pharmaceutical magnate, who betrays him – and the entire world – for a quick buck.

A humble chemist named Jeff Carter (Lon Chaney Jr.) quits his job working for a greedy, impatient pharmaceutical magnate named Graham (J. Carrol Naish) and is happy working at a local pharmacy and doing his important – and possibly life saving – experiments in his garage. When Graham offers him a raise to come back to work for him, Jeff is convinced by his wife to take the offer, and in a reasonable amount of time he discovers the cure for influenza, but Graham jumps the gun and patents one of Jeff’s faulty formulas, knowing full well that it causes death. Unable to remedy the dastardly action from his boss in time, Jeff’s own son dies of the virus, and when Jeff realizes that Graham has a plan to steal his wife from him as well, Jeff loses it and beheads his boss (!) in a rage and has no recourse but to seek an attorney to plead his case to the world …

An innocuous drama that builds to a shocking thriller final act, Strange Confession goes full-bore horror as the hero finds himself at his last recourse when everything is stripped from him. Ultimately a tragedy, the film ends on a downer, but it feels believable and you’re bound to be sympathetic to the hero’s plight. From director John Hoffman

The wife of an attorney is found suffocated to death, and a detective suspects her husband of killing her, but there may be something of the afterlife at work here …

Attorney Wayne Fletcher (Lon Chaney Jr.) comes home to the police waiting for him, as his wife was found suffocated to death in bed. Wayne has been having an affair with his secretary Donna (Brenda Joyce), and so it may seem obvious that Wayne had a motive, but there are multiple suspects here. His secretary’s family has been harboring secrets, and there’s even a snoopy, jealous neighbor who has held a candle for Donna for years. When members of Donna’s family begin dying in the exact same way (suffocation) over the next few days, the detective on the case scrambles to find motives for each killing, and a spiritual advisor and communicator of the dead is called in when Wayne swears he’s been hearing the voice of his dead wife calling out to him. As the spiritual encounters intensify, so too does Wayne’s unhinged grip on reality as the truth reveals itself.

A spooky who done it, Pillow of Death is a simple tale of madness with a hint of supernatural mumbo jumbo mixed in. Some nice atmospherics enhance the textures and committed performances ensure maximum potential. As I watched this, I easily could have imagined it as a radio program. From director Wallace Fox.

A doctor’s wife is found brutally murdered, and he’s a prime suspect.

Doctor Mark Steele (Lon Chaney Jr.) is struggling to maintain his righteous rage against his philandering beautiful wife Maria (Ramsay Ames). She flaunts her infidelities, and she taunts Mark and dares him to murder her so that he can just get on with his life and perhaps marry his assistant Stella (Patricia Morrison) who loves him. When Mark returns home from a weekend bender, looking disheveled and forlorn – and having no memory of the last few days – he is informed that his wife was found murdered and disfigured. Thinking he did it simply because he had the motive and has somehow blocked out the memory of it, Mark is accompanied by the police to identify his wife’s body, and he discovers and conceals a clue that could implicate him. Before he is charged with murder, though, another man – his wife’s lover – is charged and convicted of the crime and sentenced to death, which throws Mark for a real emotional loop. Believing whole-heartedly that he is the true culprit, Mark begins to piece together the mystery of what actually happened the night his wife was murdered, and when he discovers the truth, his conscience will eventually be clear.

A simple murder mystery with only a handful of suspects to choose from, Calling Dr. Death moves along at a very quick pace at only 63 minutes, but it’s a worthy addition to the Inner Sanctum series. It also uses the exact same prologue of a disembodied head in a crystal ball that was also used in Weird Woman and Dead Man’s Eyes. From director Reginald Le Borg.

A sociology professor brings home a wife from the South Seas, but he also brings her witchcraft practices too.

A sociology professor named Norman Reed (Lon Chaney Jr.) is on a research trip to the South Seas when he spies in on a secret voodoo ritual, and when he steps over the line and intervenes in the ceremony, he’s threatened with death from the chieftain of the tribe. Lucky for him he’s saved by a beautiful westerner woman named Paula (Anne Gwynne) who is not a native, but a woman who has completely immersed herself in the native culture and is intimately familiar with the strange rituals so practiced by the tribe. Norman and Paula fall in love and are married, and he brings her home with him back to America where she is greeted with complete and utter hatred by Norman’s former flame Margaret (Lois Collier) who has long held a flame for Norman. Norman’s other friends and colleagues welcome Paula into their circles, but Margaret immediately begins to scheme and connive a terrible plan to ruin Norman and Paula’s lives by focusing everyone’s attention of Paula’s tendencies to witchcraft and superstition, which becomes exacerbated when one of Norman’s colleagues is found dead from an apparent suicide. Indirectly blamed for his death, Paula becomes the center point of everyone’s fears, and things get worse for her when Norman almost too late realizes that Margaret has been scheming to topple his marriage to Paula. One of Norman’s associates and close friends hatches a plan to trap Margaret to make her confess that all of the evil mojo surrounding Paula has actually been conjured by her.

Aside from some hokey hokum centered around some Hawaiian-styled voodoo that clearly looks made up for a low level Hollywood production, Weird Woman delivers a pretty strong little supernatural mystery with a shocking ending. It’s almost got a Final Destination vibe running through it and fans of horror and suspense should appreciate it as one of the better entries in these Inner Sanctum mysteries. From director Reginald Le Borg.

An artist is accidentally blinded, and when people around him are murdered, he becomes a prime suspect.

Up and coming talented painter Dave Stuart (Lon Chaney Jr.) has a lot going for him: He has a rich and attractive fiancé, a promising career as an artist, and his muse is a beautiful young woman named Tanya (Acquanetta) who has a pretty obvious crush on him. When Dave accidentally blinds himself with acid (due to a fault by Tanya who misplaced a bottle in his medicine cabinet), his whole life and promising future comes crashing down around him. His career is over, and feeling terrible about his situation, he breaks off his engagement to Heather (Jean Parker). Tanya agrees to be his nursemaid out of the guilt she feels, and a friend of Dave’s – an ocular surgeon – tells him that it’s possible to retain his sight, but he’ll need a retinal transplant from a donor first. When Heather’s father is found murdered and Dave is found standing over him with blood on his hands (despite being blind), it seems as though he’s the killer, but it was Heather’s father’s wish that if he died that Dave would receive his retinas. Dave undergoes an operation to receive the transplants despite being a murder suspect of the very donor who eyes could retain his sight, and the media eats the story up. But there’s more: It seems that the killer will strike again when a clue is discovered that could implicate the real killer, but time is running out for Dave’s chances, as a detective is closing in on the case and will pin the murders on him if the real killer isn’t revealed soon.

Perhaps the best of the six Inner Sanctum mysteries, Dead Man’s Eyes has a solid hook to frame its tidy mystery plot around. With enough of a strange but compelling ideas to make the film immensely watchable and suspenseful, the picture retains a really exciting thread and keeps things interesting for its 64 minute running time. From director Reginald Le Borg.

Mill Creek’s stellar slipcover collection of all six Inner Sanctum films comes with a swatch of bonus features produced exclusively for this release. All transfers for the films are sparking and crisp, and collectors of classic horror and mysteries should immediately add this one to their collection.