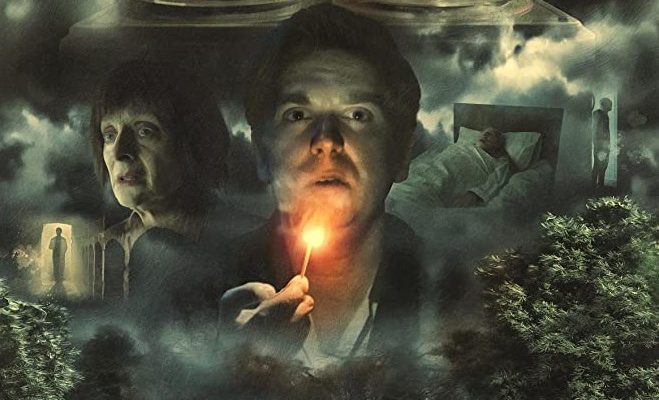 Plot: In 1960s England, Blake Cunningham and his alcoholic mother are forced to move into the mysterious Clemonte Hall, a vast isolated manor house, to care for his dying Grandfather who resides in the attic room. Soon, ghostly goings-on fill the house with dread, as it becomes apparent Grandfather’s illness may have a supernatural cause that can only be cured by uncovering the terrifying secrets of the house and its dark history.

I knew within the first few minutes I was going to enjoy An English Haunting; from the opening credits alone it oozed atmosphere with its wonderful orchestral score and moody visuals. It feels like an old-fashioned haunted house movie but the story doesn’t go the way you may expect keeping you on the edge of your seat throughout.

It is a little slowburn for the first half but the wonderfully designed interior of Clemonte Hall and its creaky doors and floorboards ups the creepiness sufficiently. It’s hardly terrifying fare relying mostly on atmosphere but there are a few jump scares and it had a limited budget but it’s probably better than a lot of bigger budget Hollywood movies.

It has a small cast which works for the story as we feel we genuinely get to know them; Blake (David Lenik) comes across as a good person who looks after his alcoholic mother as she drinks herself to sleep most nights in their new home.  I don’t understand why he became such a total wet blanket by the end during the climax however, as he could easily have fought his way out of it if he even tried.

Tessa Wood plays Blake’s mother and she’s a rather pathetic character pining for Blake’s father who never loved her enough to marry her. She is a little bitter especially towards her ailing father but as it progresses we find out what kind of a person he was…

I’ve seen some pretty mean spirited reviews on IMDb (they usually are) but I found plenty to enjoy with An English Haunting so if you’re looking for an atmospheric chiller then check it out.