HOLLYWOOD STORY is the better of the two films, but if you’re into William Castle as a filmmaker, this is a fun double feature, and it’s very affordable to own.

During the 1950s Hollywood, an independent producer unwisely opens an old can of worms when he decides to make a movie about the 1929 unsolved murder of a famous silent-film director.

By chance, a producer named Larry O’Brien (Richard Conte) learns of an unsolved murder of a once-well-known filmmaker of the 1920’s named Franklin Farrara who was killed in a bungalow on a back lot of a Hollywood soundstage. The bungalow remains as-is from the day Farrara was murdered, and while the killing intrigued the press and public for years after, it’s been more than 20 years since the fervor of the mystery has died down. O’Brien thinks the idea of making a movie of Farrara’s life and death would make a great new motion picture, but as soon as he announces his intention to the press, he gets a heavy blowback from his senior producer as well as from Farrara’s old colleagues who come in out of the woodwork to express their distaste and frustration at drudging up the past. Not only that, but someone out there is gunning for O’Brien’s life, and so he realizes he’s touched a nerve. The unsolved murder of the silent film era filmmaker is not only unsolved, but the killer is still out there, looking to quell the making of this new film …

From famed horror filmmaker William Castle, Hollywood Story is a delightful whodunnit, especially if you’ve had any history with Hollywood or if you’re a fan of the old noir pictures from Hollywood yesteryear. I grew up in Hollywood in the 1980’s and I remember a lot of old Hollywood still being around, so seeing it in black and white sort of brings it all back for me. You can also see Castle’s fascination with horror on display: There’s an extending clip from Universal’s Phantom of the Opera in the film. Any way you slice it, this one is a keeper.

A Navy veteran purchases a government surplus vessel and becomes involved in the capture of waterfront racketeers.

Newly discharged from the Navy, Dan Corbett (Arthur Franz) doesn’t have much in his pocket but a big dream to buy a big fishing boat and start a small business for himself, and so he puts a down payment on a dilapidated barge and seeks work on the docks, finding only disgruntled union workers and union bosses who are basically like the mob. He makes a big impression when he knocks the lights out of a dockworker, who happened to be the union’s best local prizefighter, and so the union bosses offer him a labor job and a chance to fight in their local boxing matches. He excels at both jobs, and because he’s so smart – much more intuitive than the local uneducated dockworker – he’s quickly promoted and attracts the lonely wives of his bosses, who see that he’s an upward achiever. When he realizes that his bosses are smuggling contraband and breaking all kinds of laws, he gets involved with the law as an informer, which puts him in the crosshairs of his crooked bosses and their enforcers. If he’s going to survive the job and collect on those dreams in his pockets, he’ll need to carefully maneuver himself into a place where his informing won’t get him killed … or framed for murder.

Another William Castle drama that he made in between his horror films, New Orleans Uncensored was shot on location in New Orleans, but it only sporadically showcases the local flavor. Most of the film is shot in and around ugly dockside locations and indoors. The movie works on the whole, though it ends on a clipped note. I liked the character Franz played: He’s the sort of tough guy that Charles Bronson might have played at a point early in his career.

Mill Creek’s double feature blu ray of these two titles looks and sounds up to par with other high-definition black and whites they’ve previously released, and it’s very affordably priced to own. While both films may not be equal to each other, they’re paired as two Universal Pictures William Castle films, so there you have it. 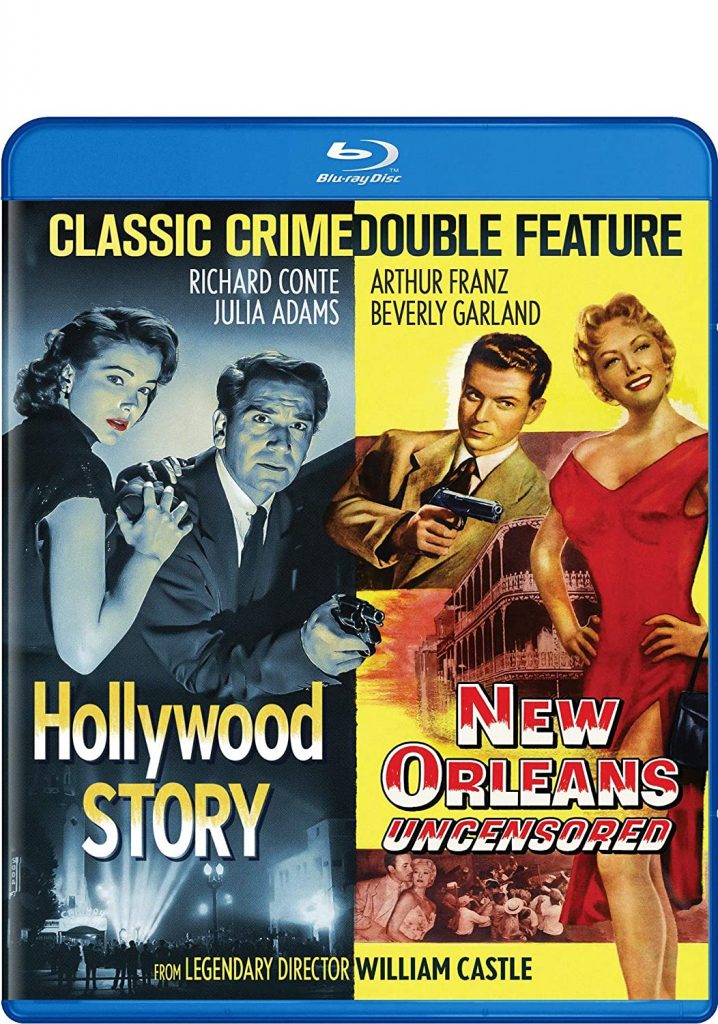