An interesting riff on the “Who Goes There?” type of story that spawned a sort of subgenre in the science fiction and horror realm, High Desert Kill reminded me a little bit of The Thing and Predator, and yet it never quite reaches a zenith of excellence.

A camping trip to a remote desert area turns into a nightmare for three guys, two women, and an old codger they meet along the way.

An annual camping excursion to a remote desert region has new special meaning for scientist Jim (Anthony Geary) and his longtime friend Brad (Marc Singer), who recently lost their dear friend Paul (Vaughn Armstrong) in a horrible accident. Jim and Brad proceed with the trip, but Paul’s nephew Ray (Micah Grant) takes his place, and this trip will serve as both a coming of age for Ray (who’s in his 20’s) but also as a way to say goodbye to their absent friend. When they get to the campgrounds, they encounter an old codger and expert hunter named Stan (Chuck Connors), and they include him in their activities, which includes spreading Paul’s ashes at the place where he loved most, high up in the mountains. They run into two young women also camping in the area, and over the first night, the women become infected with some kind of aphrodisiac, and they come on so strongly to the three men that it creates a powerful rift between them all, and all of a sudden the men become infected with the same feeling, which turns murderous and rage-filled. When the morning comes, Stan’s horses have disappeared and so have the women, leading the confused men to wonder what happened and how they became so violently affected. As they traipse around the desert, they soon come to realize that there’s a sinister presence in their midst guised as their deceased friend Paul, which is experimenting on them and hunting them down one at a time, and when Jim comes to the realization that they’re basically lab rats in a maze for an overlord, they have to figure out a way to identify it and turn the tables before they’re killed and entered into the creature’s morgue menagerie.

An interesting riff on the “Who Goes There?” type of story that spawned a sort of subgenre in the science fiction and horror realm, High Desert Kill reminded me a little bit of The Thing and Predator, and yet it never quite reaches a zenith of excellence. It’s got solid performances and enough suspense and mystery to keep it interesting and engaging, and since it was made for cable television, it plays it safe with its violence, gore, and sexuality, which is fine. Veteran TV director Harry Falk gives the proceedings an easily digestible pace, and if you’re a fan of Marc Singer like I am, this movie gets extra points.

Scorpion and Kino Lorber’s new Blu-ray release of High Desert Kill looks great in high definition. This is the first time the film has made it to disc (Universal released a VHS many years ago), and the 2K master really shines. Two aspect ratios are included: 1:78:1 and 1:33:1. 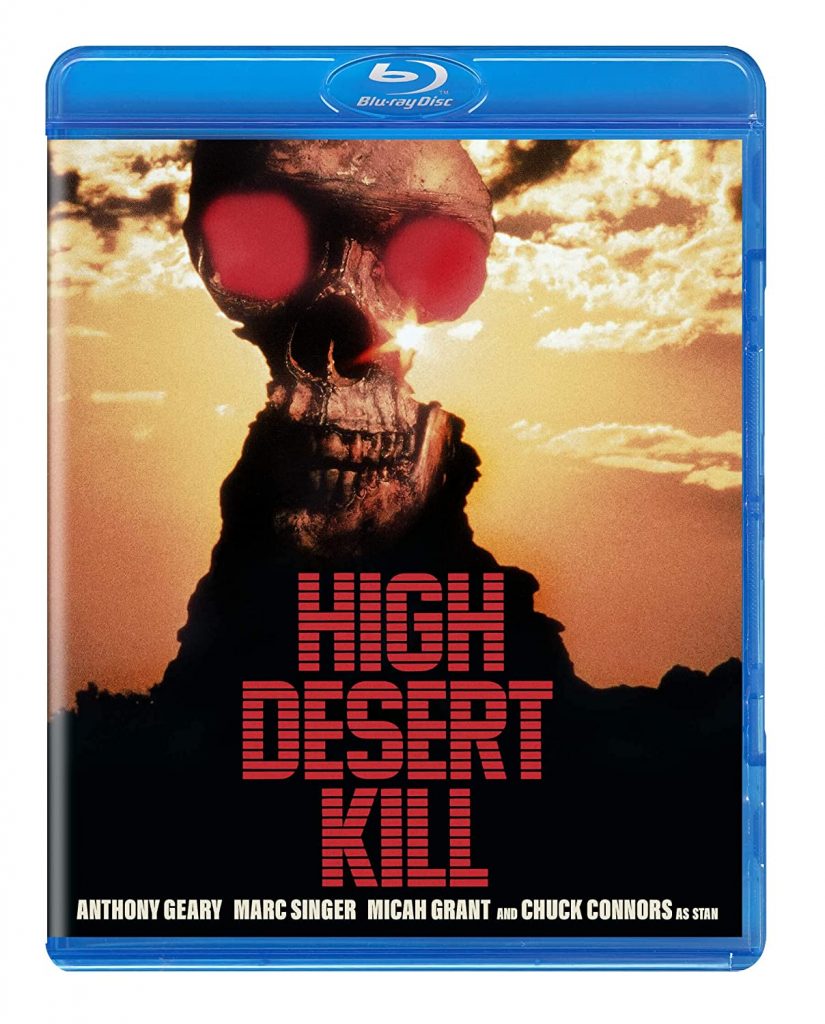