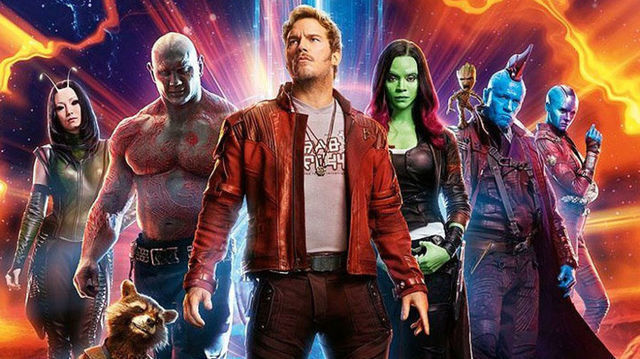 When I first heard about Guardians of the Galaxy I thought it was a ridiculous idea and would certainly be the biggest box office disaster for the MCU to date… I happily admit that I couldn’t have been more wrong and not only was the film a massive success and a lot of fun but it would end up becoming one of my favourite comic book movies. The sequel came out a few years after so let’s take a look and see which is better.

I think what took me by surprise with the first Guardians was the wacky sense of humour. There were moments where I was in hysterics and I thought Rocket and Groot are fantastic characters despite early reservations. They both steal the movie with a crackling script and colourful visuals.

Groot had some incredible facial expressions and despite only saying the same three words all the time, he’s thoroughly lovable he quickly became a fan favourite along with Rocket. Their relationship is sort of like Han and Chewie but it’s done more comically where Groot only ever says “I Am Groot”, but Rocket starts having discussions with him as if it makes perfect sense.

Chris Pratt is clearly having a lot of fun as Peter Quill AKA Starlord who is a cross between Indiana Jones and Han Solo; he’s the rogue with a heart and a one-liner for every occasion. He’s incredibly likable and has (unsurprisingly) had an amazing career since.

Zoe Saldana and Dave Bautista were awesome as well, giving us a team we can really root for and Bautista especially had some quality lines… before he got annoying in the sequel.

Admittedly it’s just a Men on a Mission movie where they are essentially putting a team together to save the galaxy, but it’s done with such visual flair and a sense of fun that it’s difficult not to get swept up in it all.

Tyler Bates’ score is a bit forgettable but it did grow on me and the classic tunes also add to the sense of fun.

It was cool to finally see and hear Thanos, although he did look rather synthetic and was only in it briefly; Josh Brolin did a decent job with the voice though.

Although Ronin was very bland as the villain I thought Lee Pace was fantastic and he had the most awesome voice; he’s not as memorable as Loki and a bit more one note but he’s very different and just pure evil. His reaction to Starlord’s dance-off remains comic genius.

I must commend the make-up, costumes and set design in the movie as well; Michael Rooker and Karen Gillan looked totally otherworldly in their respective roles and it did feel like it was creating this whole new colourful cinematic universe.

In terms of action, it’s mostly sci-fi stuff like laser guns and inventive futuristic weapons; Michael Rooker’s whistle powered arrow was incredibly imaginative. I thought the prison escape was an awesome sequence and the climactic aerial battle is pretty spectacular but the best fight scene of the movie is between Zoe Saldana and Karen Gillan.

Is it the new Star Wars? Not a chance, as it doesn’t really have the same kind of depth; the only genuinely emotional moment was the opening scene involving Quill’s mother but it still has heart and the characters are interesting enough that it leaves you wanting more.

In terms of sheer popcorn entertainment Guardians of the Galaxy delivers the goods, giving us memorable characters, plenty of humour and a sense of fun that has been missing in many blockbusters recently.

With the first Guardians rapidly becoming one of my favourite Marvel movies, I was excited to see what the sequel would bring.

Vol. 1 started off with the death of Peter Quill’s (Chris Pratt) mother which is what gave the movie its heart; Vol. 2 continues that story with Quill searching for his father and the main theme of the movie is (like the Fast & Furious movies) family. This ragtag bunch of weirdos from across the galaxy aren’t related by blood but have become a family that hurls abuse at each other with Rocket and Quill acting like two brothers. Quill and Gamora still have the will they/won’t they dynamic going on which keeps things interesting and Baby Groot provides cuteness for the kiddies although personally I found him more annoying than anything.

What I was most excited for with this movie were the additions of Sylvester Stallone and Kurt Russell to the cast and I was hoping for a Tango & Cash reunion of sorts. Sadly, they have no screentime together and Sly is only really in 2 scenes. We do get a Cliffhanger reunion though with Michael Rooker sharing the screen with Stallone for one scene but there wasn’t even a subtle reference to it which is a shame considering there are other pop culture references every two seconds throughout the movie.

Kurt is the major addition to the cast and gives some insight into Quill’s lineage and some of the best scenes of the film are between these two characters.

Despite the script not being quite as sharp as the first movie there is still plenty of heart and Quill’s story is the center of it; Chris Pratt gives one of his best performances as he isn’t quite as wise cracking this time around and is more vulnerable as he finds out the details of his past. What I liked is that every character’s story has an arc with their own moments to shine, so in terms of storytelling it mostly works pretty well.

Dave Bautista as Drax started to grate at times and a few lines just weren’t as funny as they maybe could have been but his developing friendship with newcomer Mantis provided a few laughs.

Michael Rooker has a larger role as Yondu who is arguably my favourite character of the series and he also has the best action scenes; when he uses the whistle-controlled arrow to devastating effect it’s difficult not to cheer. The same can be said for Rocket’s booby traps which he leaves outside the ship (to hilarious effect) as he attempts to repair it after it crashes.

The action is as you’d expect filled with CG galore but with a movie like this it’s to be expected and frankly the visuals are mostly stunning and incredibly imaginative.

But what of the music? Well, the Awesome Mix Vol. 2 is nearly as impressive as the original with Fleetwood Mac used in the best way possible and Tyler Bates’ score is suitably epic with some big choral moments that add to the sense of scale.

Although not as funny as the first movie there are still plenty of humorous moments but the movie also is quite somber and moving so even when the CG gets a little overbearing it never loses its heart.

Well, for me this is no contest but it’s Vol. 1 all the way; the second movie is entertaining but the first Guardians of the Galaxy was fresh and exciting, introducing to this wacky new world and even wackier characters.