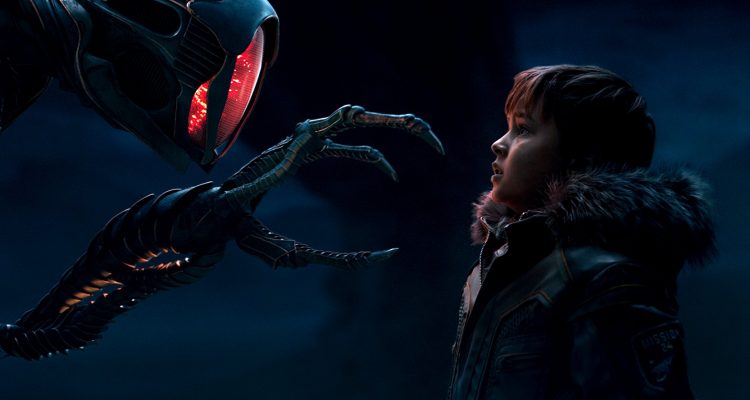 Lost in Space is one of my favourite TV shows for a long time with some imaginative and tense action scenes as well as likable characters. I can’t wait to see what they come up with for season 2 but I am already having withdrawal symptoms and miss the Robinson’s already…

Plot: After crash-landing on an alien planet, the Robinson family fight against all odds to survive and escape, but they’re surrounded by hidden dangers.

Review: I loved the original Lost in Space TV show as a kid; Dr. Smith was always hilariously camp and creepy at the same time. The Robot’s “Danger Will Robinson” provided many laughs and it just had an overwhelming sense of harmless fun.

I also enjoyed the 90’s movie reboot starring William Hurt, Gary Oldman and Matt Leblanc even if it hasn’t stood the test of time so well.

I still wish we’d got to see the John Woo reworking which is floating about online if you can find it.

Now it’s Netflix turn at getting Lost in Space again and although I went in with zero expectations I can happily say this iteration of the “Space Family Robinson” is one of my favourite Netflix shows to date. It wastes no time in getting going with visual effects better than most blockbusters. The first three episodes rocket along at a fast pace and then things slow down so we get time to really get to know the characters.

The cast themselves inhabit the Robinson’s well and I especially liked Toby Stephens as John Robinson; it’s hard to believe this is the same guy who was the villain in Die Another Day. John is flawed and has to make up for lost time with his family after making some mistakes in the past so when they crash on this mysterious world it gives him the perfect chance to reconnect with his wife and kids.

I thought Parker Posey was fantastically unhinged as Dr. Smith and this is one of her best roles to date. She can do so much with her face but rather than just being a little creepy like Smith was the original show she is now a sociopath who is trying to fit in by acting the way a normal person “should”. It’s drastically different but it works for a modern audience and I loved every moment she was on screen.

I didn’t like Maureen (Molly Parker) whatsoever as she just came across as a total bitch to everyone but as the story goes on she softens and by the end she has essentially become Ellen Ripley.

The kids were not too annoying either and I thought Penny (Mina Sundwall) had some of the best lines with Will Robinson sympathetic as he tries to overcome his fears. Judy was a little bit of a smart ass at times but became more amiable as the story progressed.

Don West is now just Han Solo and despite being quite entertaining I didn’t really take to him.

My favourite character however, was the Robot which was mysterious, deadly and very different from what we’ve seen before. It has been wonderfully updated and the fact that it is still done practically was impressive. When it says “Danger Will Robinson” in this series the last thing you will want to do is smile.

This new show frankly rips off so many sci-fi films like Avatar, Star Wars, Aliens and more but there are enough new creations to keep things entertaining. A few people have complained that the pace slows a little too much at times (which is valid) but at no point was I ever bored; there are some fun set-pieces and the final episode has some spectacular action including the robot fight.

At first I hated the idea of having all of the other people on this unnamed planet as I prefer when it’s just the Robinson’s (and Dr. Smith). As it moved along though it gave the story more scope and characters I initially disliked grew on me.

Although this show isn’t a laugh a minute there is enough humour to keep things light and family friendly which is different from the majority of Netflix shows.

I totally forgot that John Williams did the original theme to the TV series but now it’s Christopher Lennertz turn and he does a stellar job giving us the best version of that classic music to date.

Overall, Lost in Space is one of my favourite TV shows for a long time with some imaginative and tense action scenes as well as likable characters. I can’t wait to see what they come up with for season 2 but I am already having withdrawal symptoms and miss the Robinson’s already…