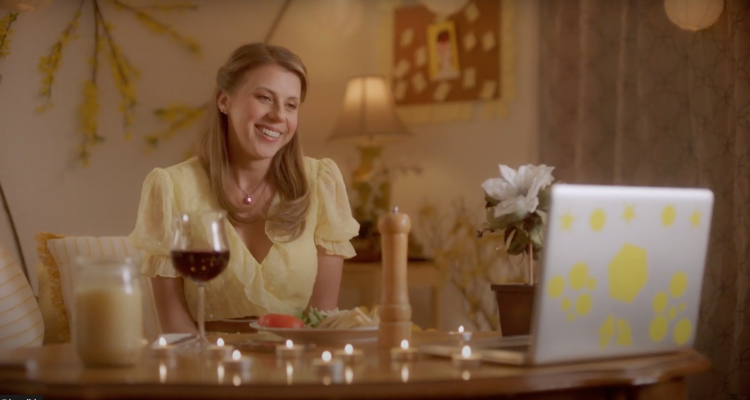 Finding true love isn’t easy, and the pandemic has made it even harder! When Vanessa (Jodie Sweetin) and Brandon (David Lipper) both swipe right, it seems like they have found what they are looking for. Can you really fall in love with someone you have never met in person?

Legacy Distribution is proud to debut the charming new film about finding love in the time of COVID-19, Just Swipe. Starring Full House and Fuller House stars Jodie Sweetin and David Lipper, Alec Mapa (Don’t Mess With The Zohan, Marley & Me), and Danielle Perez (Diary of a Future President, Curb Your Enthusiasm), Elizabeth Blake-Thomas’ film is perfect for this year’s Valentine’s Day with its fun, relatable characters, and beacon of hope in the murky world of swiping left and right. Available on Amazon Prime and Apple TV on February 8, 2022.

Entirely shot at Frank Sinatra’s old Woodland Hills estate which was chosen because of its size and ability to look like many different locations, Just Swipe was inspired by director and co-writer, Elizabeth Blake-Thomas’ own experiences with Zoom dating during the pandemic.

“As a huge fan of rom-coms, I also took pride in telling a new style of romantic comedy,” says Blake-Thomas. “Technology is such a huge part of most people’s lives nowadays. Mix in quarantine and the accessibility of dating apps and video chat platforms like Zoom, and you have a comical, relatable setting for romance. It was such a joy making this rom-com, as we all need to have a laugh, in today’s world now more than ever. With so many hardships over the recent years, it is important to laugh at the world and laugh at ourselves.”

Just Swipe is the first time that Sweetin and Lipper have starred in a motion picture together. The two starred in the classic family series Full House, where Sweetin played Stephanie Tanner and Lipper appeared in the final season as DJ’s boyfriend, Viper. They both also reprised their roles for Fuller House.

“It’s funny, I was closest with John Stamos and Bob Saget when filming the show, and of course did most of my work with Candace Cameron, who I adore,  but Jodie was pretty young when I was on so I didn’t really know her well'” says David Lipper. “In later years, I got to know Jodie a lot better and when I was brought back to Fuller House all these years later, I realized she was someone I had to work with. Being a producer now gives me the luxury of hiring the people I like, and I was thrilled to have this opportunity with Jodie, who’s grown into a wonderfully talented comedic actress.”

Synopsis: Vanessa has always had trouble in the dating world, never mind now being confined to her home. She soon discovers just how much you can get away with dating via webcam, but is the love she feels true or only a distorted version of reality?

“We are proud to be presenting Just Swipe, just in time for Valentine’s Day,” says Legacy Distribution CEO, Dana Webber. “It is the fun, feel-good film that we all need right now, and will make you believe in finding love in the strangest of times.”