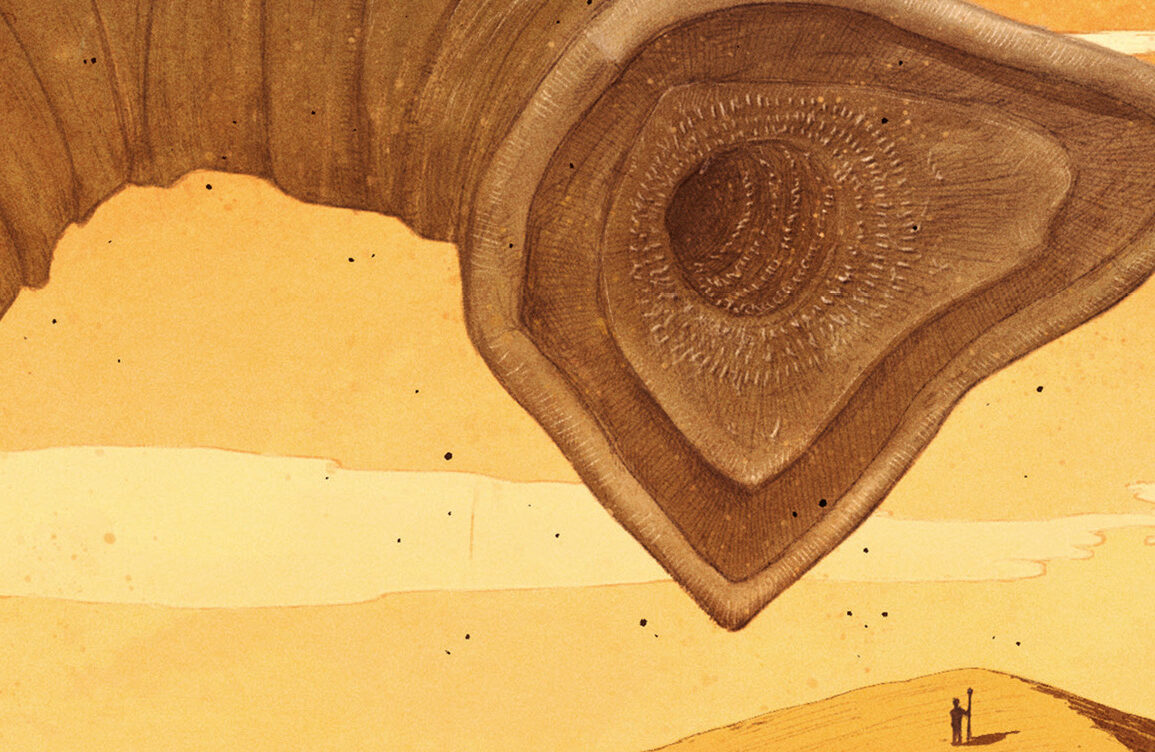 A complicated and groundbreaking science fiction novel turned into a single movie using early 1980’s technology to render its ambitious special effects, sets, and creature designs, Dune from director David Lynch is an acquired taste, but I’ve always appreciated it, despite the fact that it’s weirdly off-putting and gross in places when it doesn’t necessarily need to be. My only complaint about Arrow’s release is that it doesn’t contain the longer TV cut.

The planet Arrakis – the only planet to contain the spice mélange, an essential ingredient for life in the universe – is where a young man from another world becomes a messiah to the native people living there.

A Duke named Leto Atreides (Jurgen Prochnow) and his concubine “Bene Gesserit” (soothsayer) Lady Jessica (Francesca Annis) come to govern the desert planet Arrakis, where a spice native to the planet is harvested by giant sand worms. This spice is essential to space travel and is addictive to anyone who ingests it through breathing or eating, and therefore it is the most coveted thing in the known universe, but Arrakis is always in turmoil as a result. Native people called The Fremen are a nuisance to the Emperor of the universe (Jose Ferrer), and so he calls upon House Harkonen and the disgusting Baron Harkonen (Kenneth McMilllan) to strong arm the Fremen, but when that doesn’t yield results, he gives the planet over to House Atreides, the sworn enemy of the Harkonens, to govern. When the Harkonens kill Leto through treachery, Leto’s teenaged son Paul (Kyle MacLachlan) takes refuge amongst the Fremen and becomes their messiah thanks to a prophecy that pegs him as their savior in a time of turmoil. They rename him Mo’adib, and using his mystical training and some alchemy, he becomes a powerful force to be reckoned with. He trains the Fremen to defeat the Baron’s forces and brings the Emperor to his knees when he harnesses the power of the sand worms on Arrakis to control the spice.

A complicated and groundbreaking science fiction novel turned into a single movie using early 1980’s technology to render its ambitious special effects, sets, and creature designs, Dune from director David Lynch is an acquired taste, but I’ve always appreciated it, despite the fact that it’s weirdly off-putting and gross in places when it doesn’t necessarily need to be. It’s a murky looking movie, even in high definition, and liberties were taken to accommodate the budget and running time, but despite all its flaws, I like what it tried to achieve. The casting is really good, and Lynch managed to get as much of the novel as he could into the movie, and while it’s clunky and rushed, I don’t fault the movie for that. It’s a memorable piece of work, and epic in ways that Star Wars could never be, and true fans of science fiction should enjoy it and have a soft spot for it.

Arrow Video’s new Limited edition two-disc Blu-ray set (encased in a hardbound box) crams as much content and special features into its discs, but the one thing I greatly lament about it is that the TV broadcast with much more footage wasn’t included. The previous steelbook edition on DVD from 10-15 years ago had both versions on it, so it perplexes me why this was left out of this edition. Hours of content were included, including commentaries, interviews, visual effects features, documentaries, and on and on. One fun feature is “Beyond Imagination: Merchandising Dune,” featuring the guys behind The Toys That Made Us. Also included is a fold out poster, insert book, and new artwork created specially for this release. There’s a 4K version of this set as well.