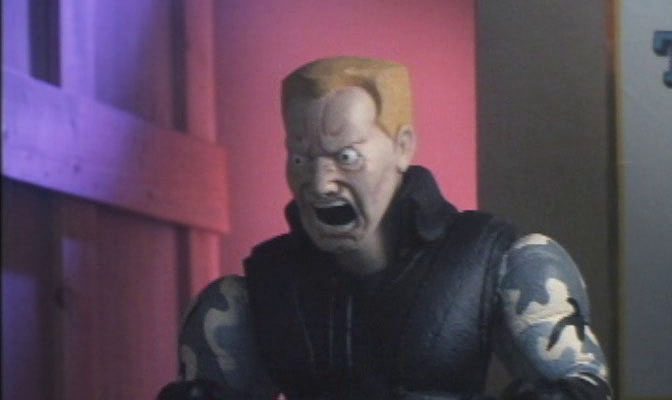 At only 60 minutes Dollman vs Demonic Toys is a brisk hybrid of action/horror that’s got some cool creature effects but is one for completists only.

Plot: Judith Grey teams with Brick Bardo (Dollman) and his girlfriend Ginger to face the evil Demonic Toys for one final battle.

Review: After being suspended from the force for acting paranoid over her experiences fighting demonic toys in a toy factory (see: Demonic Toys), detective Judith Grey (Tracy Scoggins) goes rogue and seeks help in an unlikely source: Brick Bardo – a.k.a. Dollman – (Tim Thomerson), who has recently travelled from another world to chase a criminal from his planet (see: Dollman), but as a result ended up no bigger than a He-Man doll. Dollman’s new girlfriend Ginger (Melissa Behr) is also his diminutive size, and that’s because she got shrunk by aliens (see: Bad Channels), and because he’s her only shot at a like-sized companion in life, she goes along with him to help Detective Grey root out the source of evil at the toy factory where there are a bunch of possessed toys running around performing satanic rituals. Leave it to Dollman and the bikini-clad Ginger to save the world from the Demonic Toys!

A three-way crossroads that connects three different franchises from Full Moon Entertainment, Dollman vs Demonic Toys must have been one of the easier productions filmmaker Charles Band had to assemble, as it runs just over 60 minutes, with long pre-title and end title sequences, as well as recaps from Demonic Toys, Dollman, and Bad Channels just in case you might have missed any of them before watching this one. There might be about 40 minutes of new material here, and while that sounds like a cheat (it pretty much is), the movie is still watchable thanks to Thomerson’s ease on screen with his attractive co-stars. There’s plenty of action and creature effects (though the laughing clown gets annoying fast), and so if you’re looking for a mindless action horror hybrid, and if you’re a fan of the Full Moon library, there’s Dollman vs Demonic Toys to fill that void. But seriously: It’s only 60 minutes long.

Full Moon’s recent Blu-ray release of this film is the first time it’s been made available in the widescreen format, and the transfer is quite nice, with warm colors and filmic vibrancy. Special features include a newly recorded audio commentary by Thomerson and Band that is fun to listen to until Band all but kicks Thomerson out of the room as soon as the movie’s end credits roll. There are also featurettes and trailers.