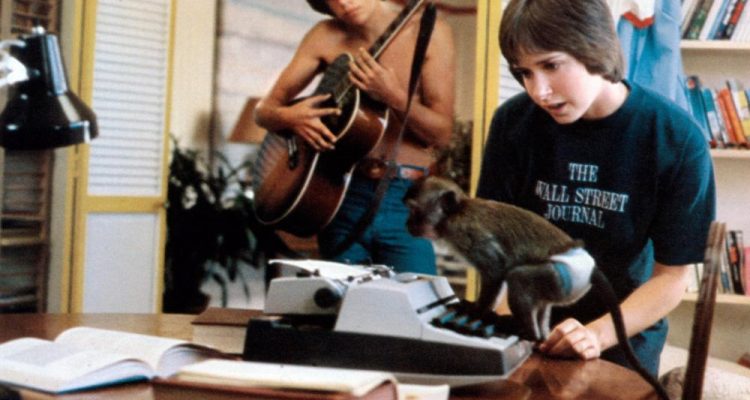 Die Laughing is entertaining in parts but not as funny as it could be and I doubt there would be much that modern audiences would enjoy.

Plot: A San Francisco cab driver finds himself in possession of a monkey that is carrying a formula for turning atomic waste into a plutonium bomb. He finds himself framed for a murder and chased all over town by people trying to get the formula.

Review: Daniel Pinsky (Robby Benson from Jeremy and One on One) is an aspiring folk singer that makes his living as a cab driver. He picks up a fare carrying a box, and when his passenger is murdered by an assassin while they’re sitting at a stoplight, Daniel is thusly framed for the man’s murder. All of a sudden Daniel is vigorously pursued by the police force and a team of assassins who want the box belonging to the murdered man. When Daniel finds out that the box contains a monkey carrying a valuable chemical compound in its bloodstream, Daniel must figure out a way to stay alive while dodging bad guys, government spooks, and more danger than he’s ever encountered before.

Not quite the madcap comedy adventure that it wishes it was, Die Laughing was meant to capitalize on young star Benson’s popularity at the time. Prior to this, he’d been a teen idol, and this film was one of the first where he starred as a full-fledged young adult. It feels more in tune to a thriller, with some violence (which, admittedly, is a little “light”) and a theme of espionage. Benson is just playful enough in the film to make the movie suitable to a younger audience, but today’s kids and young adults are far more sophisticated than what Die Laughing can offer them. This movie’s prime audience is adults who grew up in the late ’70s and ’80s. I halfway enjoyed it, and while it has a few small laughs, its dated sensibilities and low-fi execution might not cross over to today’s audiences. Directed by Jeff Warner.

Warner Archives recently released Die Laughing onto DVD as part of their Warner Archives burn-on-demand series. The 1:85:1 aspect ratio (16×9) looks nice, and the sound is offered only in mono.