A nicely collected Blu-ray edition of some decent potboilers. I liked them all for different reasons.

Two women conspire to murder one of their husbands, but things get twisty.

Mia Baran (Isabelle Adjani) has a weak heart, due in no small part to the fact that she’s abused by her domineering and controlling husband (Chazz Palminteri) who’s a professor at a prestigious school. He sleeps around with students and coworkers, namely Nicole (Sharon Stone, cold as ice), a sultry vixen who happens to be Mia’s best friend. Everything is on the table with these three: there doesn’t seem to be any secrets, although Nicole has been pressuring Mia to help her murder her husband for some petty cash amounting to 50K, but if Mia doesn’t do something drastic soon she’ll likely die of a heart attack from all the stress and abuse her husband subjects her to. So they drug and drown the bastard. Mia’s sloppy at murder, but Nicole has it down pat, and their big plan to conceal the body fails spectacularly, and the corpse literally disappears overnight, causing Mia to have a conniption. Enter a snoopy one-breasted detective (Kathy Bates in a fun performance) who pokes her nose into Mia and Nicole’s business, and suddenly the two co-conspirators get itchy when they have to come up with answers to questions they hadn’t thought of concerning the disappearance of Mia’s husband. And things get twisty when Mia is certain her husband is still alive and playing tricks on her.

A master art forger is lured into a gig that might ruin him if he doesn’t figure out how to make the best of his situation.

Master art forger Harry Donovan (Jason Patrick when he was on the verge of accepting stardom) is known in the underground art circles for his master craftsmanship for creating flawless forgeries of all the great artists. For a few years he’s tried to walk the straight and narrow, but without a signature personal style, he flounders as an artist in his own right. When an opportunity to create a “new” lost masterwork by Rembrandt for a great deal of money presents itself, he goes to Italy and France to do research on Rembrandt, and then he begins the complicated process of creating a one-of-a-kind piece of art that he knows will be accepted as a Rembrandt. When he delivers the piece, his benefactors betray him and he finds himself framed for a murder as well as the theft of what everyone else believes is a priceless Rembrandt, which only he himself knows is a fake because he did it. With only one ally on his side – a beautiful art history academic (played by Irene Jacob) – Harry will have to come up with a plan to save his hide way before he’s caught by the authorities to safeguard his future.

A pretty sweet sleeper of a globetrotting thriller from director John Badham, Incognito could’ve been a corker of a film if it had been directed by Alfred Hitchcock, but as it is, it manages to keep you engrossed and entertained all throughout. With a nice score by John Ottman, beautiful scenic locations in Europe, and a genuinely satisfying ending, it’s surprising that this movie was all but dumped by Warner Brothers when it was released. It deserved better than that. The biggest detriment to the film is star Patrick who never quite seems totally invested in the movie.

Freshly released from a mental institution, a young woman is inducted into an elite group of friends, whose former member mysteriously disappeared.

With a history of mental illness, beautiful young Adrien (Lori Heuring) is handed a job at an exclusive country club by the ocean on a probationary basis. Given menial tasks like maid service and waitressing, she tries to keep her head down and nose to the ground, but it proves impossible when a clique of wealthy friends – namely the coquettish Brittany (Susan Ward) – invite her into the circle. At first, she’s flattered and tickled that she would be so honored by their attention, but when she realizes that she’s essentially replacing another young woman who recently mysteriously disappeared, she becomes suspicious of the group and comes to understand that she’s a new plaything for Brittany, who’s a bisexual lunatic. After another member of the group is found drowned, Adrien comes to the stark realization that she’s next on Brittany’s list.

A fairly hard PG-13 erotic thriller with some eyebrow-raising nudity, sexual situations, and violence, The In Crowd feels like a pilot for a WB network TV series, with a nondescript, but slick looking cast, straightforward camera angles, and dreamy locations on the seaside. The main actors pout and try to emote, but sometimes only their mouths move, while the rest of the scenery breezes by with the wind. I liked it, but probably shouldn’t have. It’s basically like a Wild Things DTV sequel, which is weird because co-star Susan Ward was in one of those movies too. Frankly, I’m shocked that this snuck by with a PG-13. If I’d taken my 12 or 13-year old to see this, I might’ve blushed. Mary Lambert directed it.

Mill Creek recently released all three of these movies on one Blu-ray disc as a triple feature, and I suppose the connecting element for all three films is producer James G. Robinson, whose Morgan Creek Production banner headlines all of them. The films looked adequate in high definition, so if you’ve been holding onto the DVDs like I have been, perhaps it’s time to retire them for this nicely packaged edition. 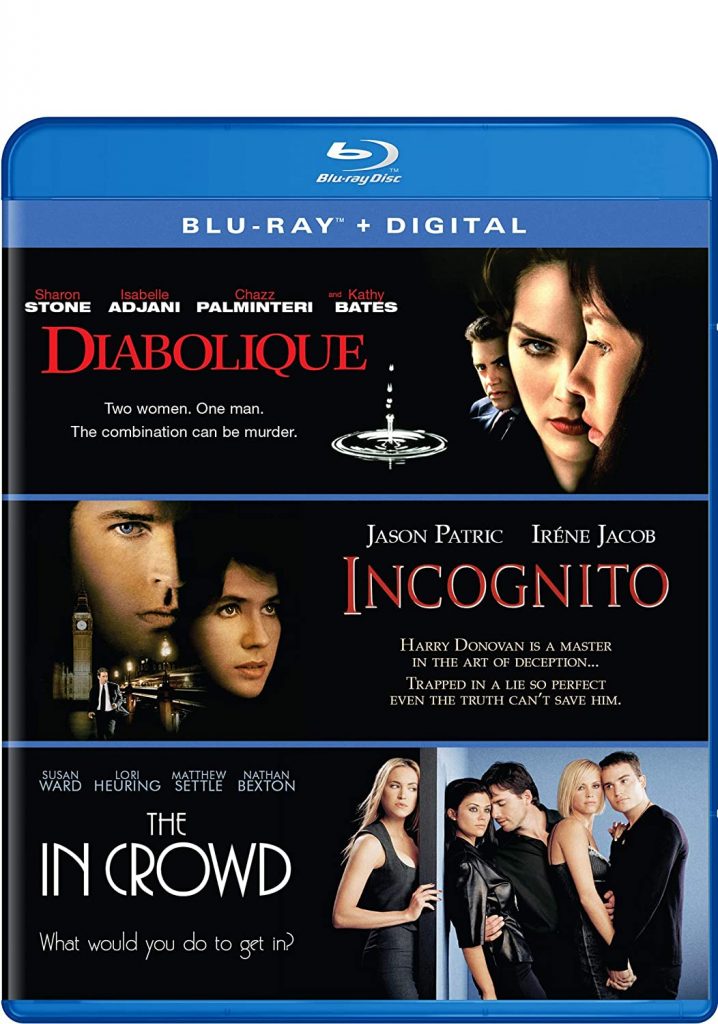