Severin’s new Blu-ray edition of Day of the Animals is fully stocked with special features and features a new 2K transfer, which easily makes it the best looking edition of the film to date.

“God sent a plague down on us because we’re just a bunch of no-good fellers!”

The end of the world comes when the animals turn against us.

Grindhouse movies don’t get much more apocalyptic than this. The opening text message on the screen says that scientists have concluded that the over usage of aerosol spray cans has damaged the ozone layer and that all of nature has been severely affected by that. There is a long moment of silence and blackness before the movie begins, suggesting that we need to think about not using aerosol spray cans anymore. Finally, the movie begins. A group of city folk has gathered at the bottom of a mountain town to embark on a camping and hiking trip up in the wilderness. Two helicopters take them up and drop them off at a campsite, and they start hiking. Right away they all notice that the birds are acting strangely. That night, a wolf attacks a woman in her sleeping bag, and the two tough tour guides, one of whom is an extra-environmentally sensitive Native American, get nervous. Leslie Nielson plays a bossy and annoying city slicker on the tour, and he gets aggressive with the two tour guides, which makes things uneasy. Over the course of a day or two, the hikers get attacked or mauled by all sorts of crazed animals, and it isn’t difficult to understand that the aerosol cans the world has been using has driven the animals crazy. Down in the town below, chaos is brewing. The military has seized control over the town and other towns around it and has declared martial law. The ozone radiation has gotten so bad that it is literally driving the animals insane, and some people too! The military is roaming around in their Hazmat suits while people in their homes are being killed by hordes of snakes and rats. Meanwhile, on the mountain, the hikers are being picked off one by one by the animals and birds, and when the group splits up, Nielson goes completely bonkers and tries to rape a teenager, but she’s saved by a huge bear that eats him! When a few of the hikers make it back down to the town, the town has been decimated by the animals, and news reports suggest that the problem is everywhere.

How can you not enjoy a flick like this? It’s wacky and it takes itself seriously. Maybe it’s wacky because it’s so serious, but I enjoyed it. I like the idea that all of a sudden nature snaps and not just the animals are affected. This is a good idea, and the movie sort of gets enough mileage out of it to sustain a feature length movie. More apocalyptic movies should take this central idea (forget the aerosol cans, though) and run with it. If I were to make a post-apocalyptic film, this is the direction I would take. Also starring Christopher George and Richard Jaeckel. Directed by William Girdler, who made Grizzly.

Severin’s new Blu-ray edition of Day of the Animals is fully stocked with special features and features a new 2K transfer, which easily makes it the best looking edition of the film to date. I compared it to my Shriek Show DVD, which was released over a decade ago, and Severin’s release is the clear champion. Severin also just released Girdler’s Grizzly onto Blu-ray, so stay tuned for that review soon.

Here’s a list of the new special features on this disc: 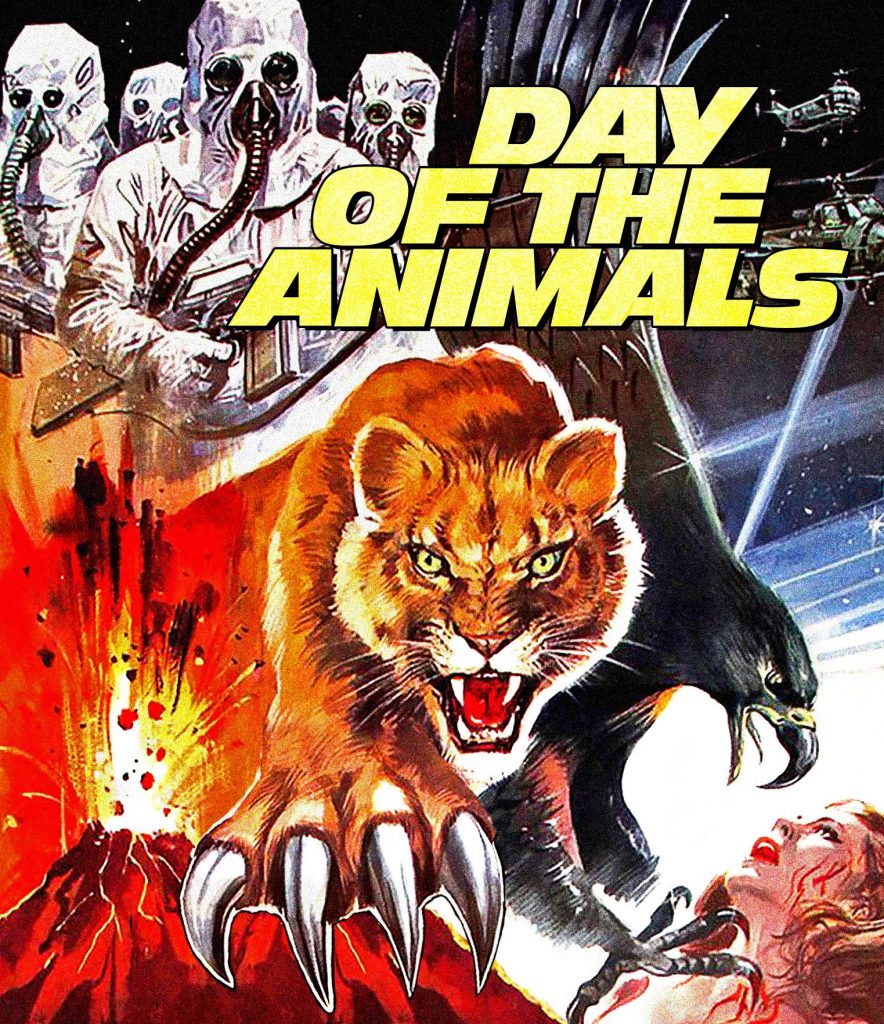