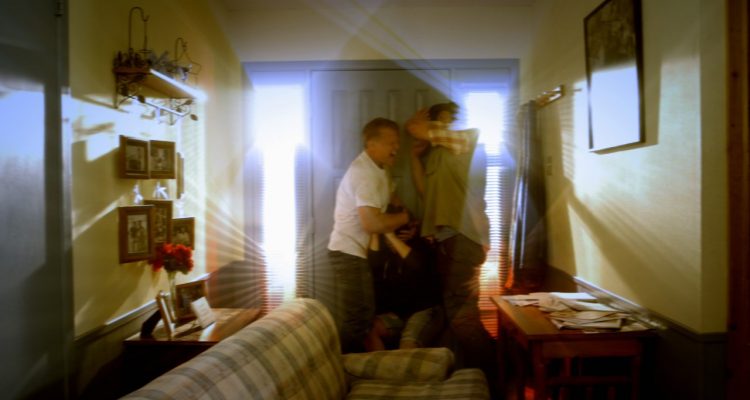 When former Sheriff and skeptic of the paranormal, Tom Mayfield (Boo Arnold), encounters three dead bodies on his TX ranch, he must enlist the help of his conspiracy-theorist brother-in-law (Rawn Erickson II), a local surveillance expert (Dante Basco), and a renowned cryptozoologist (Stephanie Drapeau), in order to uncover who or what is behind these mysterious events.

While being pursued by the local detective (Kevin Sizemore) as a lead suspect for these deaths, Tom is forced to reconsider his preconceived ideas of what lies beyond our planet.

Ultimately, he must mend the estranged relationship with his daughter (Tahlia Morgan) and come to grips with the truth of his missing wife (Tiffany Heath), as he discovers the importance of community in survival and the belief in the unseen.

From High Octane Pictures, the studio that brought you Clowntergeist and The Answer, comes another workout for your goosebumps, Sightings out 11/7.

First question, have the fans of Harry & the Henderson picketed the film yet!? In all seriousness, this is a much, much different film than that one…  how do you describe it to folks?

Thankfully no picketing yet – Ha. Yes, our hope is that this film is different then what people have seen before. From the beginning I’ve described it as a character-driven sci-fi/mystery about a dysfunctional family living on a ranch in TX who have to overcome their interpersonal conflict in order to unite and survive the creature terrorizing their woods. It has the setting and tone of “Signs”, the creature and adventure elements of “Jaws”, and the science fiction style of “Close Encounters of the Third Kind.”

I always try to set people’s expectations that while this is a fun and exciting movie, its thrills come in the form of suspense and tension more than gore and jump-scares.

You’ve a great cast. What was it that got them to want to be involved in Sightings?

I am very proud of our cast and think they all did a fantastic job. My wife, Tahlia Morgan, who plays Hannah (the daughter in the family) produced the film with me. So we knew from the beginning that she would play this role. Everyone else had different stories on how they came aboard – but what was consistent for all of them is that they agreed to do the movie once they read the script. That’s always encouraging and what you want.

What kind of guidance and direction did you give those appearing on-camera?

We didn’t have any type of traditional rehearsal period, but I knew we were going to have an extremely short schedule and not a lot of time to do multiple takes and experiment on set. So I spent time with each actor beforehand, either via phone or skype, literally talking through every scene their character was in. We would discuss ideas on specific lines and the overall motivation for each scene and their character as a whole. This was very valuable as I remember there were a few occasions I was able to reference things we talked about in those discussions while we were blocking scenes on set.

And does that include the monster?

Ha. So our monster was played by our key grip and our editor, and we actually did have them practice the different movements. I’ve obviously watched the Patterson/Grimlin footage of Bigfoot a lot so I was able to give them notes on how to walk and swing their arms. It took a few tries.

Was there anyone you would’ve wanted to have involved but couldn’t get?

Without naming names, we actually had another actor already attached to the role of Uncle Rickey very early on, back before we even had funding. By the time funding was in place, we decided to go a different direction and wanted Rickey to be much younger. That’s when we approached Rawn Erickson II for the role. It was definitely the right choice, Rawn was perfect as that character.

Practical effects are definitely a preference for me. I think VFX should be there simply to enhance what was already done on camera, not to replace or create it. Aaron Milus, our VFX artist, did a great job of simply taking some shots and pushing the image closer to what we wanted. He wasn’t having to create anything from complete scratch.

Haha. You know, I debated with myself before the press started for this movie on whether or not I would ever tell my opinion on the matter. I’ll say this — there are a lot of people all over the world that have seen and experienced something. I don’t think those sightings and experiences are a lie. Now whether or not what they’re seeing and experiencing is truly a Sasquatch, I can’t say because I haven’t had my own encounter … yet!