Season 3 is a mixed bag, but with some very solid episodes and segments, it might be the best season yet of Creepshow.

An anthology of horror stories, torn from the pages of Creepshow!

The macabre comes to vivid life once again in the third season of the anthology series Creepshow. Six episodes comprise 12 sordid tales in the style of Tales From the Crypt, and as usual there are outstanding segments, while also featuring weaker, less compelling segments.

The first episode features “Mums,” a rather depressing story about a fundamentalist militant group whose leader (played by Ethan Embry) murders his wife for trying to escape, leaving their son, an innocent boy without a mother or any chance of escape. The boy digs up his mother, not realizing what has happened, and the mom’s vengeful corpse wreaks unholy revenge on the militants keeping her son captive.

Also featured in the first episode is a coming of age tale called “Queen Bee” about a group of teenagers who happen to have a bloodsucker amongst them. a sleepover party turns bloody when the Queen Bee reveals herself, much to the horror of the other kids. This pair of stories was my least favorite of the season.

The second episode was a little livelier and more imaginative. “Skeletons in the Closet” is about a museum in Hollywood that features actual props from horror films across the ages, from the black and white days to the more recent hits. A collector (played by James Remar) walks in and demands that one of the props be forfeit to him because he has evidence that the store’s deceased father dug up an actual corpse to feature in the store (which is against the law, obviously), leading to some severe bloodletting when the store owner fights for what he believes belongs to him. This episode has some horror in-jokes (the flying sphere from Phantasm is featured, for example), but the story and direction fail to catch fire.

The second part of the episode features the segment “Familiar,” which is a pretty strong segment. A couple on a date end up at a fortune teller, who secretly informs the guy that “something evil followed them inside the store,” which leads to the guy having a nervous breakdown over the next few days and nights as he realizes he’s being haunted by a malevolent “familiar” spirit who wants to claim his soul. He spends the next few nights trying to trap the spirit in his apartment, which makes things complicated with his girlfriend … who might know something about familiar spirits.

Episode three has one of the best segments in it: “The Last Tsuburaya,” which focuses on a lost piece of artwork from a legendary Japanese painter. The last living relative (a Best Buy employee in Orange County, California, haha!) of the painter inherits the painting, which has never been seen by a living person, but before he can unveil the work of art, one of the world’s richest men swoops in and buys it for 10 million, and makes a big show of unveiling the painting only to himself and then lighting it on fire before anyone else can see it! This would make him the only person on earth to have seen the artwork, but it’s a grave miscalculation as the monster on the canvas begins haunting him to the point of madness.

The second segment of episode three is about a condemned convict in a maximum-security prison. “Okay, I’ll Bite” features the prisoner who communes with spiders and tarantulas and uses their venom to synthesize some kind of drug that other prisoners become addicted to, and the sadistic guards demand more drugs, but instead the prisoner uses his power of communication with the spiders to find a way out of prison … even if it means sacrificing himself to his god, an enormous spider.

The fourth episode has two solid segments: “Stranger Sings” is about a siren who lures a surgeon into her trap, but her plan isn’t exactly what we expect, leading to an interesting conclusion that is surprisingly happy and upbeat.

Creepshow goes full on post-apocalyptic with “Meter Reader,” which showcases a grim, post-Revelations world where demons have possessed the living, and where the exhausted, decimated Church have recruited “Meter Readers” – wasteland-roving door-to-door exorcists who haven’t been ordained and use renegade, anything-goes methods to exorcise demons from households. Most people simply behead their loved ones rather than waiting around for Meter Readers to come around, and every morning huge waste collection trucks drive by, telling anyone still living in the neighborhoods to throw away the decapitated heads of their loved ones ASAP. A Meter Reader (played by Jonathan Schaech) shows up at a house where a demon-possessed mother has tied up her daughter, hoping to lure in a man of the cloth (even though he really isn’t) to possess, and sure enough his exorcism goes sideways, and he brings his demon-possessed self home to his family living in lockdown. He destroys his family, leaving everyone dead, except his teenage daughter, who manages to best him and decapitate him, and she takes up his mantle as a Meter Reader, putting on the wastelander garb and using her dad’s motorcycle to carry on his grueling work.

This might’ve been the best episode of the third season of Creepshow, and it casts a chilling, uncomfortable shadow in its roughly 20 minute run time. There’s never quite been a post-apocalyptic movie or show in the same vein, and it really dug its heels into its premise and setting, and I commend director Joe Lynch for crafting something vivid in such a short amount of time.

Episode five has one of the season’s best and strongest segments: “Time Out,” which is about a young man who inherits an armoire with a remarkable secret contained within – it can freeze time while you’re inside of it. Vowing to himself that he will succeed as a lawyer in life as well as raise a family, the guy uses the closet every day to get all his work done to succeed in life, but after years of using it, it begins to take a severe toll on his body. He ages exponentially, and so he vows to stop using it, which ends up having an effect on his family and home life, leading to a fatal decision he makes that will have catastrophic consequences for his family.

The second half of the episode features the animated segment “The Things in Oakwood’s Past” about a town that had an event a hundred years ago where every citizen in the town vanished one day. In the present day, a woman finds a mysterious time capsule with strange writing on it, and when she realizes what the box contains, it’s too late to stop it from opening (with the entire town there to witness it), which proves to be the town’s next undoing.

The final episode has the segment “Drug Traffic,” a wild and weird one about a border patrol agent (played by Michael Rooker) who encounters the most bizarre and deadly immigrant he’s ever faced … a young Malaysian woman having an adverse reaction to some drugs she took, and her mother. The young woman becomes a floating head with a taste for blood, leading to some outrageous and graphic kills where her disembodied head floats around, looking for victims, and the border patrol agent is frantic as he tries to grapple just what the heck is going on!

The final segment is “A Dead Girl Named Sue,” which is set adjacent to the events of George Romero’s original Night of the Living Dead. Focusing on a guy in a jail cell, it concerns the zombie outbreak that has the country in an uproar, and he’s confronted by some townspeople for some wrongs they believe he’s committed, and when they unleash an undead child on him for the sins they believe he’s guilty of, it will be a night to dismember!

RLJE’s new release of Creepshow Season 3 comes with over an hour of bonus content, including tons of interviews, behind the scenes footage, a comic book booklet, and more. 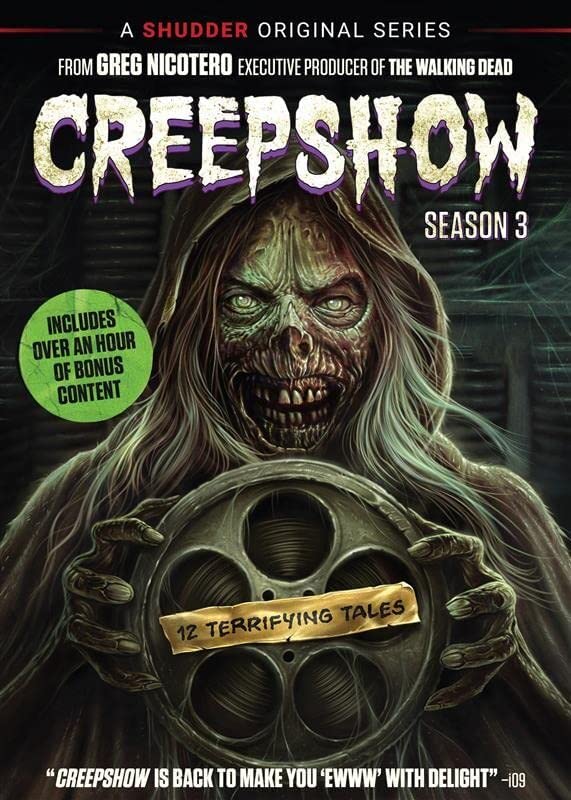