Of the four shorts included in this collection, Kamandi: The Last Boy on Earth is the highlight.

Constantine: The House of Mystery Review:

Following the devastating events in Justice League Dark: Apokalips War, paranormal detective and spiritualist John Constantine (voiced by Matt Ryan) uses magic to turn back time and manages to reset the world with the help of The Flash, ensuring that the Apocalips War never happens. As punishment for meddling with the universe, Constantine is banished to a nether realm called The House of Mystery where he literally spends hundreds of years being tormented by demons and killed and / or devoured on a daily basis. But because he’s clever and foresaw the day that he would be imprisoned in this hellish place, he sold his soul to three different demons, each of whom come to collect it at the same time, giving him one and only chance to escape.

At about 20 minutes or so, Constantine: The House of Mystery is a nice, if very gory, companion piece to the DC animated Movie Justice League Dark: Apokalips War. It presents a post-apocalyptic earth at the beginning and spends most of its running time in the purgatory-type House of Mystery where all sorts of hellish events happen to Constantine. Fans of the DC line will enjoy it, and it maintains momentum throughout. Directed by Matt Peters.

After “the great disaster,” earth has succumbed to neglect and ruination, not to mention mutations that occur in nature and the animal and insect kingdoms. A race of evolved apes (think Planet of the Apes) have long held a prophecy that a powerful being will return to the world, but out of necessity, they collect all sorts of mutated species to force them into a three-stage series of gladiatorial-type scenarios to whittle down the contestants to see which (if any) of them will hold up to the standard of the mighty one. Three rat men are chosen, as well as a tiger man, a gorilla man, a science experiment of a man whose skin can turn into metal, and a young wasteland warrior named Kamandi (voiced by Cameron Monaghan) who grew up in a bomb shelter, are all chosen to compete against each other, and with each test, Kamandi proves himself to be loyal, merciful, and victorious in all ways, and he even manages to tame a giant insect to be his companion in future endeavors. His prize is the mantle of Superman, who has long been absent from earth, but he rejects it, going on a quest to find the Man of Steel in the ruined wastelands of Earth.

An eye-popping and infectiously entertaining retro looking animated short film (18 minutes) done in the ’60s or early ’70s style, Kamandi: The Last Boy on Earth is a real gem and a comic book come to life. It’s based on a comic book series that began in 1972, and it’s a loving homage to Planet of the Apes. Outstanding in every way. This short can be found in the Blu-ray collection entitled Constantine: The House of Mystery. Matt Peters directs.

An expendable team of World War II soldiers are dropped on an island in the South Pacific and instead of finding human enemies find instead a lost race of dinosaurs! Captain Storm, Johnny Cloud, “Mile a Minute” Jones, and Gunner and Sarge team up with a local beauty named Fan Long, and their mission is to rescue a scientist who somehow screwed around with time and space. Are The Losers up for the job … or will they be the reptilian creatures’ next meal?

Action-packed and retro looking, the DC showcase animated short The Losers is fun, but at 16 minutes, the film feels too short. A feature length movie might’ve done this one more justice. From director Milo Neuman.

Doctor Spectro is on the loose, and silver age hero Blue Beetle returns from an absence and teams up with Captain Atom, Nightshade, and The Question to get the job done. Using science, brawn, and brains, the three heroes have their hands full in saving the world.

Feeling as if it were plucked right from the Saturday morning era of the 1970s. The DC Showcase short (16 minutes) Blue Beetle is fun, if a little redundant. Fans of the characters will appreciate it more than others. From director Milo Neuman.

Warner Brothers will be releasing this set of four shorts under the headliner Constantine: The House of Mystery, and it comes with a digital code, plus the bonus feature “One Story at a Time.” 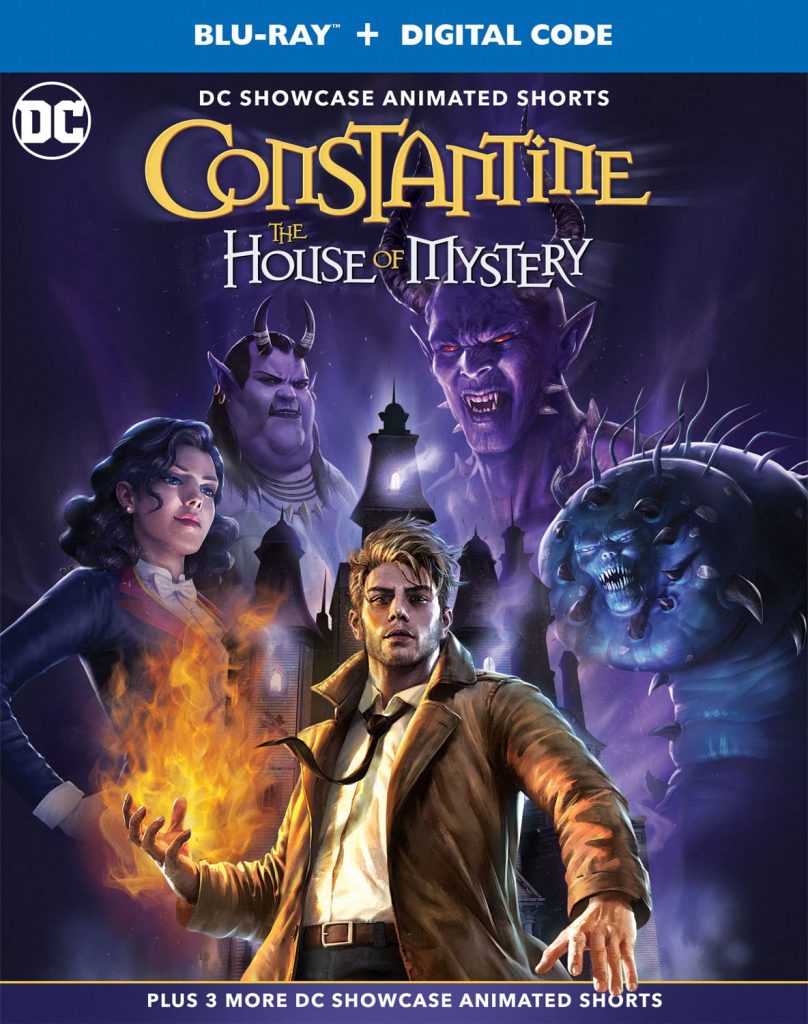