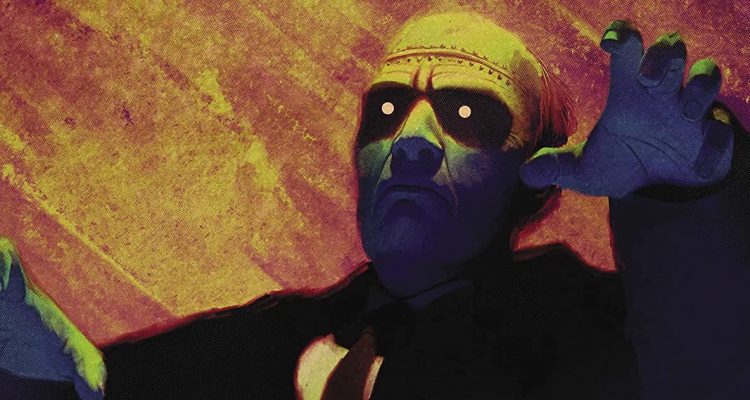 Four fun black and white horror / science fiction films that are each very well produced and executed. Arrow’s limited set is gorgeous from top to bottom with tons of bonus material.

Some treasure hunters come to a small African village to seek a lost stash of diamonds … and awaken a long-dead crew of zombie sailors.

A treasure of diamonds sunk along with a ship full of sailors sixty years ago, and over the decades various treasure hunters have come to the coast of Africa to try to find the sunken treasure. Each and every attempt over the years has spectacularly failed, resulting in the deaths of all who try. Their graves line a parcel of the jungle, with only a slab of wood with the year of their failed attempt to mark their final resting places. Another group of adventurers – cocky and full of piss and vinegar – assembles and are sure that they know where the diamonds lie in the ocean, and when they come upon a humble old woman living in a small home on the coast, she somberly warns them that they will fail as well. As soon as the treasure seekers land on the coast, they awaken the undead crew of the sunken vessel, and like the zombies that they are, the crew silently and slowly presses forward towards the newcomers to kill them. With the zombies of Mora Tau pursuing them, the diamond hunters lose ground and crewmembers (who become zombies themselves), proving that the old woman was right. but when they accomplish the impossible by finding the diamonds, there’s one chance – and one chance only – to break the curse that has held the coast under a wicked thrall.

A well made and quite violent little supernatural thriller, Zombies of Mora Tau has a sharp mood and atmosphere, and director Edward Cahn mixes adventure and horror in equal measure. Sam Katzman’s production is handsome and the leads in the film are all completely committed to their roles. A solid piece of understated horror, this one delivers.

A man with amnesia has become a werewolf and wanders a small, snowy town, trying to figure out who he is.

A man (played by Steven Ritch) with a worrisome brow stumbles into a coffee shop for a coffee and asks the waiter if he recognizes him. The waiter says no, he’s never seen him before, which is no comfort to the man. The man wanders back into the snowy cold evening and is accosted by a mugger who demands his cash, but the man does something impossible: He turns into a werewolf and kills the mugger and staggers into the wilderness outcropping the small town. When the dead guy is discovered, the police figure a wolf killed him, but an eyewitness swears that it was a man … who looked like an animal! A hunting party assembles, and the man changes back to human form and is tormented by his predicament. He can’t remember who he is or what has happened to him, but several doctors performing experiments in the small town might have some answers, and when the police find a woman and a young boy looking for their husband / father after he got into a car accident a few days ago, answers begin to coagulate.

A stark but effective werewolf feature, The Werewolf does everything right, including having a very convincing looking werewolf creature, with solid looking transformations. The movie is not anything more than advertised, but the snowy, icy looking setting provides an unusual backdrop for this story; it adds texture and layers to an already moody character piece. Director Fred F. Sears and producer Sma Katzman delivered a werewolf movie worthy of the moniker, and it’s as good – or even a little better – than some of the Universal Monster Wolf Man movies.

Detectives scramble to understand how dead men are going around committing murders and robberies … and leaving radioactive trails!

A gruesome murder of a mob boss happens and the killer – controlled by two masterminds in a laboratory – is virtually indestructible. Detectives – including family man Chet Walker (Richard Denning) – are assigned the case, and Walker is the first to be clued into the fact that the killer left behind a radioactive trail with glowing fingerprints and blood. The fingerprints match a man who died in prison, and while that seems impossible, the next murder points to a similar conclusion: The killer is radioactive and his prints match those of another deceased man. With Walker on the case, the mad scientists (who have ulterior motives in sending their undead minions to commit murders) deem Walker a threat and decide to have their test subjects hunt him down to kill him, but Walker is too smart to be killed so easily. When Walker’s partner is killed and turned into a “creature with an atom brain,” the scientists have an advantage over the police department with their spy, but only for a little while as Walker figures out how to track the radioactive minions to the mad scientists’ hideout. An explosive finale has the police department and the military surrounding the hideout with guns and grenades and a whole squad of undead, unstoppable minions walking straight into a hailstorm of bullets and bombs.

A police procedural with a supernatural, science fiction twist, Creature With the Atom Brain is more than a little on the goofy side, but it works because it plays out with nary a wink or an ironic tone. It’s a completely serious film and some of the violence in the movie is pretty shocking, even by today’s standards. The first murder has the killer (a big, beefy guy) picking up a full-grown man and snapping him in half in a convincing moment. Director Edward L. Cahn worked well with this material, and producer Sam Katzman’s production is solid all around.

A giant bird from space attacks earth, and nothing can stop it!

Some American jet pilots on a training exercise are the first to see something way out of the ordinary flying around the atmosphere, but it’s almost unexplainable: A giant, extraterrestrial bird creature has appeared! The military has no idea what to make of it. When it begins attacking pilots and makes it very clear that it’s not friendly, the military scrambles to come up with a plan to defeat it. It looks like a gigantic vulture with a massive beak and enormous claws, and it swallows up parachuting soldiers whole. Normal guns and missiles can’t harm it, but only aggravate it. Soon, it flies off to lay an egg as big as a small building, and so the military makes sure to focus on that before there’s another unstoppable creature to contend with, but when they destroy the egg (with sniper fire), they incur the wrath of the bird, who makes its way to the nearest metropolis – New York City – and proceeds to wreak havoc on the Empire State Building. Meanwhile, a scientist figures out how to create a weapon strong enough to kill the creature, but there’s only a limited amount of time before the creature comes into its full potential to destroy earth!

A typical creature feature done in the style of King Kong, The Giant Claw is a bit corny, with a big, gangly monster held up by strings, but it does have some appeal for fans of giant monster movies like the Godzilla pictures. Just don’t expect a classic here, and you’ll be fine. From director Fred F. Sears and producer Sam Katzman.

DISC 1 – CREATURE WITH THE ATOM BRAIN

DISC 3 – THE ZOMBIES OF MORA TAU