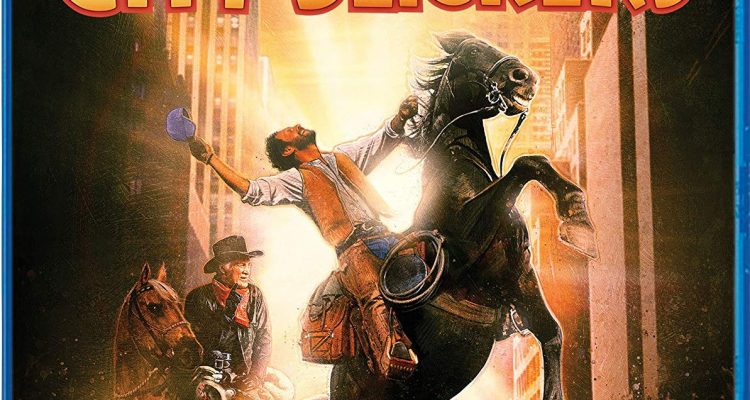 One of the ultimate movies of the 1990’s, City Slickers was a surefire hit, and gave Billy Crystal one of the best roles of his career.

Plot: On the verge of turning 40, an unhappy Manhattan yuppie is roped into joining his two friends on a cattle drive in the southwest.

Review: Discontent with his life and his disposition, Mitch Robbins (Billy Crystal) begrudgingly agrees to go on a cattle run in New Mexico with his two best friends (Daniel Stern and Bruno Kirby), who both have issues of their own to work out. But being the city slickers that they are, they’re completely out of their element on horses and trying to herd cattle, but it doesn’t matter because fate has something very special in store for them that goes beyond the casual male bonding experience they thought they were going to have. Their lives are going to be transformed by the responsibility and the danger they face, and they will grow as men, as friends, and as human beings.

One of the ultimate movies of the 1990’s, City Slickers was a surefire hit, and gave Billy Crystal one of the best roles of his career. The movie is a little coarse and pushes the PG-13 rating, but it remains a very watchable (and very ’90s) comedy that still makes you laugh. Jack Palance gave an iconic supporting performance as the surly cowpoke Curly, and he won the Oscar for it (and did push-ups on stage during his acceptance speech!). Just imagine if Charles Bronson had taken the role, as he’d been offered the role first. Ron Underwood’s direction is just right. Marc Shaiman provided a fun, sprightly score.

Shout Factory Select recently released City Slickers on a newly issued Blu-ray (it’s #47 on the spine), and it contains a 4K transfer and some ported over features such as an audio commentary by Underwood, Crystal, and Stern, as well as four featurettes and deleted scenes. Paul Shipper created some new artwork for the cover, but if you prefer the origial theatrical art, you can reverse the sleeve.