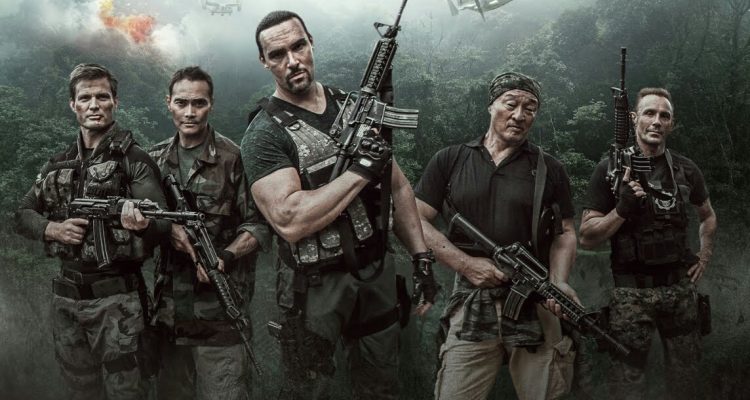 Fans of the Cannon Films era of the ’80s and ’90s will be pleasantly surprised with the body of work presented by Alexander Nevsky. A Moscow-born champion bodybuilder and student at UCLA turned actor, director, writer and producer, Nevsky has been active for over 15 years in the industry, and has worked alongside such cult figures as David Carradine, Andrew Divoff, Kristanna Loken and, most recently for US audiences, Mark Dacascos, who directed Showdown in Manila, in which Nevsky stars alongside Casper Van Dien. An intense physical presence in his films, Nevsky brings some imposing and gritty cards to the action movie table in a way that will make action fans reminisce of the days of Arnold Schwarzenegger in Raw Deal. Alexander is kind enough to provide his valuable time during his work in an exciting new era for action fans and stars alike.

First of all, thank you very much for spending some time answering these questions. It is an honor and a privilege.

It’s my pleasure! And thank you and The Movie Elite very much for all the support.

You were born in Moscow before eventually moving to California. What was life like in Moscow, and what are the biggest differences between life in Russia and life in the US?

I was born in Moscow when Russia was still a part of the USSR. I remember the Cold War between our countries. I was very skinny 14 years old when I watched Conan the Destroyer at Moscow Film Festival in 1986 and it changed my life – I started to do boxing and later switched into bodybuilding. By 1993, the USSR was long gone and I became household name in Russia thanks to a documentary about me. It was shown on Russian TV and about 30 million people watched it. I was introduced as a Mr. Universe contender who also just graduated from Moscow State University of Management. It was my “from zero-to-hero” story. Later in the ’90s, I had my own TV show about fitness, was on the covers of many magazines, wrote books and articles. But the movie business in Russia collapsed with the collapse of the USSR so by 1999 I decided to move to California. I learned English at UCLA and studied acting in Lee Strasberg Theater Institute. My first acting job in Hollywood was Walter Hill’s Undisputed. I produced my first film Moscow Heat in 2003. The biggest difference is my star power: I have it in Russia and don’t have much of it here yet. But I love California anyway – the weather is so nice! It’s freezing in Moscow right now..

Showdown in Manila puts Mark Dacascos in the director’s chair, and you were also one of the writers. What was it like working with such a cult action star in that capacity? Was he helpful in nurturing as much as everybody wanted to do creatively?

Mark is a personal friend and we created the story for Showdown in Manila together. Craig Hamann wrote a very good script and Dacascos decided to make it his directorial debut. I was glad to get involved as an actor and producer. I think Mark did a great job and I have no doubts that he’ll direct again. He was very supportive and allowed me and others to improvise in many scenes. Mark was always positive and nice, it was very easy to work with him. And I think his character’s fight scene is one of best in Showdown in Manila!

You portray a vintage Schwarzenegger-esque character in this movie, alongside a wisecracking and humorous partner as played by Casper Van Dien. You guys seemed to have a lot of natural chemistry, and your abilities to pull off the discrepancy onscreen felt like it went seamlessly and felt very natural. Was he like this off camera, as well?  How much of that did you guys have to modify for movie writing?

Casper Van Dien is an action icon, his work in the Starship Troopers franchise is amazing. But he’s a great actor also. I was introduced to Casper by Mark Dacascos and we always wanted him to play Charlie in Showdown in Manila. Thanks to Van Dien we have these nice comedy moments in the film. And thank you for the compliment, it was great to act with Casper, he helped me a lot during the rehearsals and the actual shooting. As I said, we improvised a lot but it was easy because characters were written very well in the script.

Showdown in Manila was released in Russia two years prior to its recent US release. Are there any major differences or obstacles in the release and distribution of the movie in these respective markets?

It’s not easy to make an independent film, and it’s even harder to release it. We shot Showdown in Manila in 2015, finished it and open wide theatrically in Russia/CIS in 2016, sold it pretty much everywhere worldwide in 2017 and just released it in North America on January 23, 2018 in limited theaters, on VOD, in RedBox and on all the digital platforms. It was also released theatrically in most countries of the Middle East on February 1. In Russia I’m an established movie star and can open the film wide theatrically, in the US – not yet. But I’m still proud that Showdown in Manila was released in most of the countries, it’s a big achievement for an independent action film in today’s environment!

You were a bodybuilder before making the leap to movies. What does your typical workout regimen and caloric intake look like during a given week?

I won WBBF/WFF Mr. Universe 3 times and I love bodybuilding with all my heart. I’m a natural athlete and I always promote drug-free sport. For Showdown in Manila I wanted to gain muscles so I trained for several months, 4-5 times a week and did basic exercises with heavy weights. I eat 4-5 times a day, a lot of fish and chicken. It paid off and in Manila my weight was about 290 pounds (my height is 6’6″). I strongly recommend Arnold’s and Joe Weider’s books to all your readers if they’re interested in bodybuilding.

I understand you also have published several books on fitness and bodybuilding, which must have helped you in having plenty of writing experience for movies. What was it like to make the transition from a physical athletic presence to that of an actor and also writer/director? What were the biggest changes and adjustments for you personally?

I’m an author of 10 books about fitness, bodybuilding and healthy lifestyle. I also wrote hundreds of articles. My first script was Moscow Heat, which I co-wrote it with my friend Robert Madrid. As I said earlier, this movie was produced in 2003, was released in Russia in 2004 and sold worldwide in 2005. The film was released in the US, was in every Blockbuster and Hollywood Video store (remember those?), and the TV premiere was on Cinemax. Regarding the transition from bodybuilder to an actor and producer – it wasn’t that hard because I had discipline and drive. I knew very well that I had to do everything by myself and shouldn’t wait for anyone’s help. And now I’m doing all these movies one after another but I still workout almost every day, eat properly, drink a lot of water, and do my cardio. My lifestyle hasn’t changed much since my times as a bodybuilder 😉

During your acting and writing career, you have gotten to work with some incredible actors, including Robert Davi, David Carradine, Andrew Divoff, and others.  Is there any one in particular that you have learned the most from, or have any noteworthy positive interactions that you recall?

They all helped me. Robert Davi and Billy Zane spoke to me about acting a lot during our work in Magic Man. David Carradine and Sherilyn Fenn told me all these stories about history of Hollywood industry when we were working on Treasure Raiders. Micheal York and Andrew Divoff advised me on the script of Moscow Heat. And on the set of Showdown in Manila I was surrounded by my martial arts idols – Mark Dacascos, Matthias Hues, Don “The Dragon” Wilson, Cynthia Rothrock and Olivier Gruner. We all trained together every morning and it was like a dream come true. But the most important advice I got from Governor Arnold Schwarzenegger. I was introduced to him in 2000 by our mutual friend Mr. Universe Ralf Moeller. Arnold told me: “If you want to really try in Hollywood, you have to create your own kingdom. And don’t forget your core audience.” I heard him well and several years later I created my production company Hollywood Storm. I produced 7 successful international action films to date and I always have world premieres in Russia.

It is stated online that you have refused roles from such projects as BattleDome and The Order because you didn’t want to portray the image of the “evil Russian villain.” Is this true, and would you take on a heel/villain role if it were presented in a more complex fashion?

Yes, I’m strongly against anti-Russian stereotypes in Hollywood movies. I never played roles like that and I’m not gonna do it in the future. We don’t need another Cold War. In my movies, Russians and Americans are always fighting together against evil, not against each other! I was offered part in The Order in 2001 and at the time it could’ve helped a lot. Sheldon Lettich was a director, Avi Lerner was a producer, JCVD and Charlton Heston were the main stars. But I still refused to play “Russian villain” and I don’t regret it at all. Same story was with BattleDome which was kind of like the American Gladiators TV show.

Along those same lines, you took the helm as director in your last movie, Black Rose. This movie also had such stars as Kristanna Loken and Adrian Paul in some different types of roles than most audiences were used to seeing them before. Was this something you or the writers were planning to experiment with beforehand, or did it just come about naturally by virtue of the writing of the story?

Black Rose was my directorial debut, but I also produced it and was in almost every scene as an actor. I created an original story about a Russian cop who has to travel from Moscow to California and help the LAPD in a search of new Jack the Ripper. Kristanna Loken and Adrian Paul played LA detectives and did a great job. Sheldon Lettich served as executive producer (I didn’t play the “bad Russian” in his film The Order but we later become friends anyway). The film was released worldwide and now is on Netflix. Kristanna played strong characters before but she really shined in Black Rose in my opinion, she’s such a nice actress. Adrian Paul is a very good friend of mine and he created a lot of things for his character. By the way, director of photography Rudy Harbon worked with me on Black Rose and on Showdown in Manila. He helped me a lot, and he helped Mark, too.

What can we look forward to seeing next from you in the near future?

My next action film Maximum Impact is almost finished. It was directed by great Andrzej Bartkowiak of Romeo Must Die and Cradle 2 the Grave. The script was written by Ross LaManna, who created the Rush Hour franchise. I produced it and costarred with Kelly Hu, William Baldwin, Denny Trejo, Tom Arnold, my friend Matthias Hues and Mark Dacascos, Bai Ling and many others. Maximum Impact is the biggest movie I produced and it should be released worldwide soon. Your readers can get updates on my official Instagram: @RealAlexNevsky and Twitter: @NevskyAlexandr.

Thank you very much for your time and we look forward to your work in the future!

It was great to talk to you, Nathan! Please say hello to all The Movie Elite readers and fellow action fans for me!