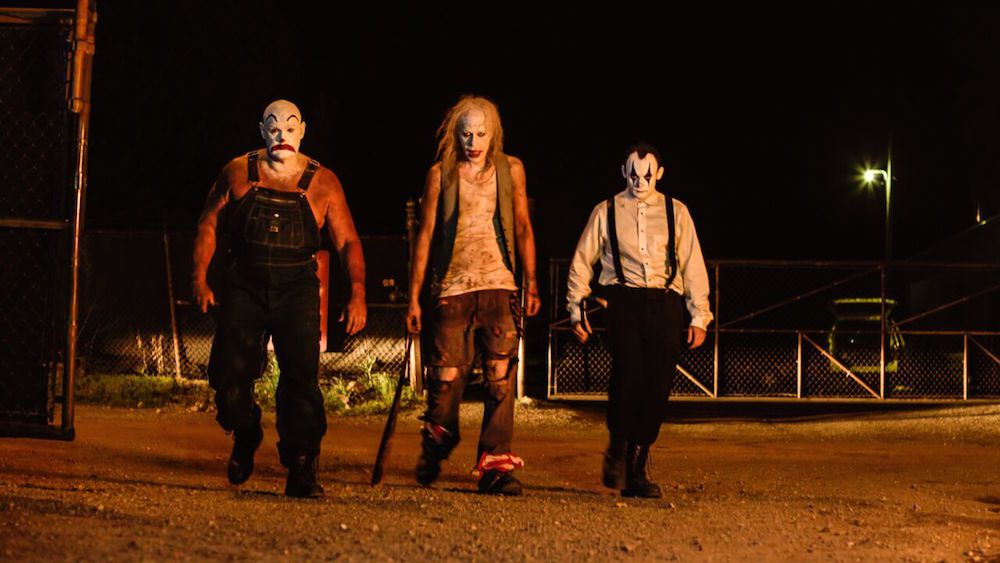 Chris Hahn is a former WWE/WWF wrestler back in the 90″s (Johnny Paradise) and now he is an Actor with Stunt Abilities. His acting career started to take off in 2013 with Axe Giant which aired on the SYFY network. He is known for his work on ClownTown (2016), Inoperable(2017), Miles Ahead (2015). Criminal Activities(2015) and Axe Giant: The Wrath of Paul Bunyan (2013).

Today he stops by The Movie Elite to discuss his new movie ClownTown.

With Axe Giant, The Funhouse Massacre and now Clowntown under your belt I’m noticing a pattern that you like working in the horror genre. What is it that keeps bringing you back to it?

The darkness of horror I enjoy. The scares, the night shoots, I love it all.

Clowns have freaked people out for a long time; what do you think it is about them that inspires such terror?

The total quietness and creepiness of clowns. Plus there’s always a smile like their hiding something.

Do you find them scary?

Did you know director Tom Nagel before coming on board Clowntown?

No, but I’ve known Jeff Miller for ever; I played the axe giant plus the crazy deranged orderly in inoperable for him.

What appealed about it to you?

I want to be the one to scare you. I love it.

How was the shoot for Clowntown and what was the toughest day?

Night shoots, I love it. Make up every night and taking it off in the morning sucked but I looked real creepy and that was awesome.

How do you prepare for the role of a killer clown? I hope you weren’t a method actor…

I had to get into the deranged metal attitude kinda like the Johnny Paradise role.

Have you heard about the clowns ‘politely terrorizing’ a town in South Carolina recently? That wasn’t you guys was it?

No, but it’s great for the movie as long as no one gets hurt.

I feel like we need a sequel or maybe even a prequel showing the rise of the clowns. Would you be interested in returning to that world?

What else do you have coming up?

On Oct.1 I play a prison guard in Girl from Compton and I am in 6 episodes of the new MacGyver where I play a FBI AGENT.

Thanks so much for taking time out to chat with us and good luck with the movie.