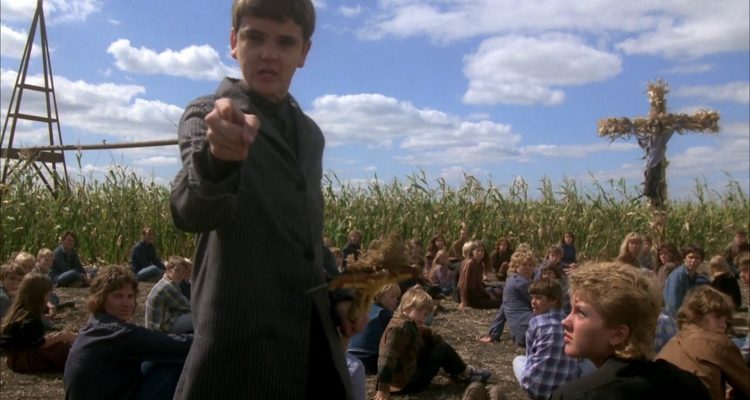 Synopsis: A young couple is trapped in a remote town where a dangerous religious cult of children believe everyone over the age of 18 must be killed.

Review: A blissful young couple (played by Linda Hamilton and Peter Horton) are on a road trip when they have an unfortunate incident on a deserted highway: They run over and kill a child standing in the middle of the road. This event triggers a harrowing journey of survival as they try to find a town to alert the authorities what happened, but the nearest town is completely deserted, save for a smattering of bloodthirsty children who worship a god their leader calls “The One Who Walks Among the Rows.” What the area is best known for is the endless acres of corn stalks, and we already know that these children murdered all of their parents and all adults over the age of 18 some time ago, and when the young couple comes wandering into town, their first order of business is to sacrifice them to their god.

A pulpy chiller sold on Stephen King’s name (it was very loosely based on one of his short stories), Children of the Corn was always around in the cable TV and video store days of the 1980s and 90s. The film works as a late night slasher-type movie, and with its light supernatural elements, it has an eerie sense of otherworldly horror. While it never rises above cult status, it does recall another bone chiller from the 70s called Who Can Kill a Child, which is an endurance test of the viewer’s will. Watching a bunch of children commit murder is not exactly my idea of a good time, but the original Children of the Corn manages a balance of shock and sensationalism that manages to work. From director Fritz Kiersch. Followed by seven sequels and a remake.

Arrow’s 2K restoration of this title looks the best it’s ever looked. Nice, crisp and filmic textures fill out the screen, and the special features include port-overs from the old Anchor Bay DVD, as well as new interviews with Linda Hamilton, new commentaries, and a bunch of fun documentaries.