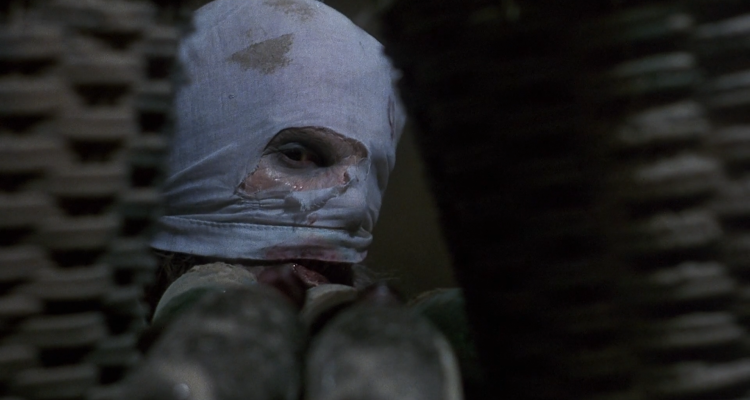 Aged well and still manages to shock and disturb. Nicely remastered Blu-ray too.

Plot: A man struggles to save his family from the strange and deadly occurrences in the castle they’ve inherited.

Review: A yuppie family takes a trip to Italy when they inherit a castle, not realizing they were on anybody’s will. John (Jeffrey Combs) is a struggling, depressive alcoholic who is the direct cause of his young son’s death and the blindness of his teen daughter Rebecca (Jessica Dollarhide) after a drunk driving accident. His wife Susan (Barbara Crampton) has resigned herself to riding out the marriage as best she can, and when John inherits a mysterious castle from a distant relative, she sees this as a chance to mend the marriage. But things don’t go as planned: a hideously deformed and severely abused man has been living in the dungeons beneath the castle, and he gets out (after feeding off of who knows what and a wall dripping with water) and begins to wander the halls. John, Susan, and Rebecca don’t realize at first that they’re being stalked and preyed upon by the castle’s dirty secret, but when they finally understand that the castle isn’t haunted, but inhabited by a “castle freak” intent on slaying them and eating them, they have to fight back or die horribly at the hands of something indescribably awful.

Stuart Gordon’s Castle Freak is something else! If you’re familiar with Gordon’s work like Re-Animator, From Beyond, or Dagon (amongst others), then you should have a good idea of what you’re getting into, and believe me: It’s a lot! This film is shocking in its brutality and horror, with eyebrow-raising gore scenes and sexual violence. It’s aged remarkably well, and its ability to entertain and scare haven’t diminished in the least. If you have a strong stomach and a high gore tolerance, check out Castle Freak, which is, incidentally, based on a story by H.P. Lovecraft.