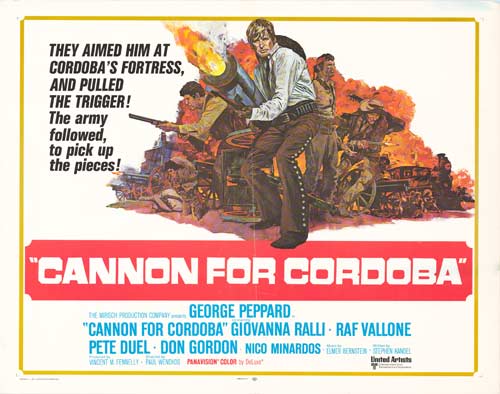 It’s a little long but there are plenty of explosions, horse riding, and cannon blasting which genre fans will love.

Synopsis: In 1916, when a Mexican rebel steals cannons from the American army, General Pershing sends out a group of misfits to retrieve the stolen weapons.

Review: George Peppard plays a tough soldier named Rod Douglas during the Mexican Revolution, and after receiving orders to destroy six cannons that rebel leader Cordoba (Raf Vallone) has commandeered, he and his team venture into the battle zone to do their dirty work. Unhappy with his previous performance that got botched, General Pershing (John Russell) puts a fire under Douglas’s feet and has them teaming up with a turncoat Mexican officer and a sensuous beauty to infiltrate the Mexican army and create chaos and mayhem as they make their way to the six cannons.

A bombastic, chaotic action / western / war movie that should appeal to fans of those genres, Cannon For Cordoba has cigar-chomping Peppard getting his hands filthy with grit and blood as he mows down bad guys. Full of explosions, horse riding, and cannon blasting, this film feels a little long, though, at 104 minutes, and it never quite emerges as a classic. Elmer Bernstein provided a good score, and director Paul Wendkos style was very straightforward with not a lot of flare for the dramatic (which this film could have used).

Kino Lorber’s recent Blu-ray release of Cannon For Cordoba looks nice in 2:35:1 HD, and special features include an audio commentary by two film historians and some trailers.