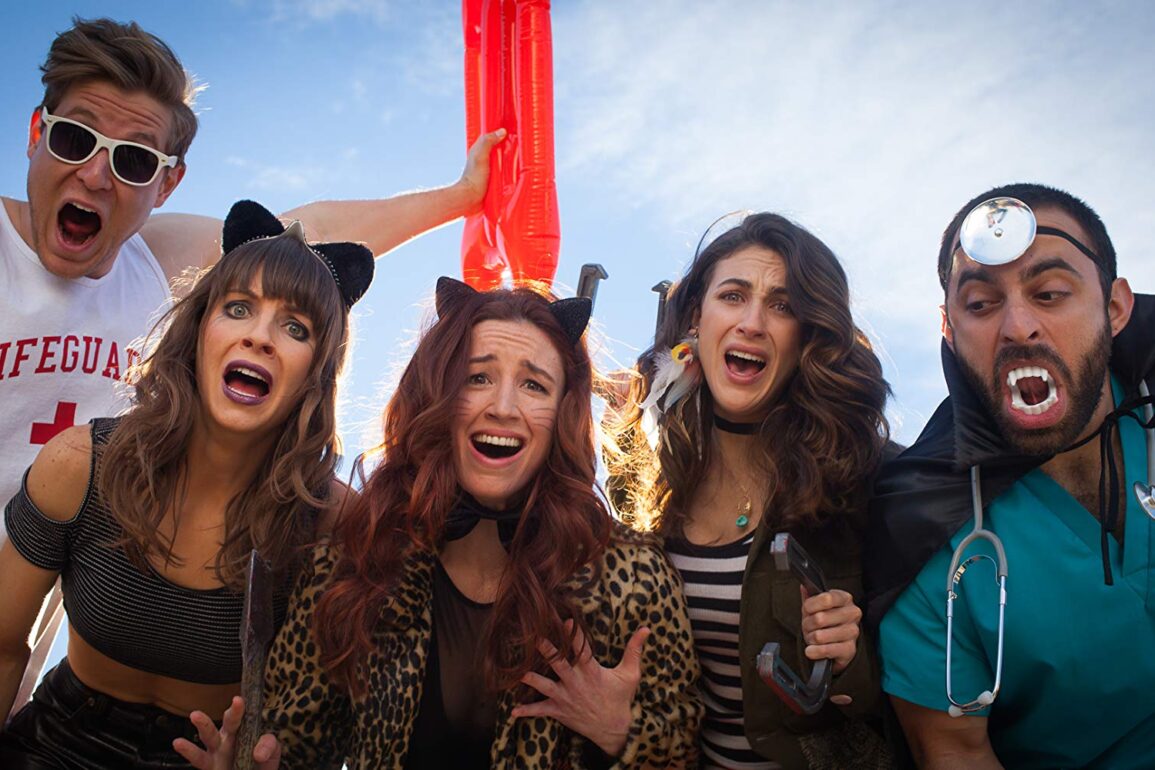 Watching the “Blood Puppet! Christmas ‘94” premiere at the FEARnyc Horror Film Festival is a trippy experience in its own for all involved.  The festival director said that after one viewing of the submission, he knew this had to be his opening night film. The sold out theater included some cast member and family members who hadn’t seen the finished film,

The first striking thing about “Blood Puppet” is that VHS look. It isn’t a home effects studio “film look” with some added scratches and pops. The colors look soft and faded like a copied VHS tape. The version projected at FEARnyc was as digital file taken from a VHS tape. Director Kangas Miller said that was tricky to do.
“So we did an actual VHS transfer of the film which is a lot harder than I initially thought. Usually it goes the other way around like converting VHS to digital and that is pretty easy. To get the other way around we had to sneak into USC production facilities to use their VHS transfer machine,” he said.

Bookend scenes detail some horror fans finding and watching a legendary VHS tape. The story on the tape is about friends driving out to a house by Joshua Tree park a fun weekend of drinking and being murdered. The friends have much contempt and jealousy between them to the point that anyone could be the killer. Or everyone.
Someone is definitely getting backstabbed first with words and secondly with a knife or some rather unpredictable items.  Point of view shots are used to hide who is doing the killing for a long time.

Think of it as Friends gone sinister. Miller described it entirely relying on Scooby Doo cartoons for style including the sound effects for any small movement.
“Honestly, it is Scooby Doo. I love Scooby Doo. I didn’t wanna make something that was straight forward. More of a comedy. A lot of the gags are just ripped directly from it. He slips out of frame and the camera shakes. It’s all Scooby Doo,” he said.

The dialogue is snappy and it is mostly people snapping on each other. The characters stay intent on staying at the house even as the bodies pile up to talk about who could have done it. So now it combines a drawing room murder mystery with a monster in the house story. Another character dies almost every time someone leaves the room.
One scene takes time to recount what happened just out of sight from everyone’s own biased point of view causing much laughter. Anthony Casella, who plays Raj, said this was his favorite sequence.

“My favorite parts are everyone recounting their versions because I liked the dishonesty,” Casella said.

Miller said he enjoyed writing for his friend.

“It really helped for Anthony, knowing his sense to humor and knowing stuff I wanted to see you do,” he told Casella.

“Blood Puppet” was made on a long shooting schedule and added pick up days. He used many of his friends from L.A.
“Pretty much everyone I know in LA is in this movie. I said hey man ‘can you come by the house for a day and well and shoot something. We got incredible young actors. Everybody was terrific. We lucked out big time,” Miller said.

John Capo, founder and festival director of FEARnyc, collected Miller and cast members to speak after the premiere He described his feelings about finally meeting a director he had selected from the submitted video.

“As soon as the tape ran out I said “it’s accepted.’ That is the opening night film and that part of my work is done,” Capo said.

“You pick someone who obviously took risks from wiring to directing to performing, to the actual not give the audience what they and anticipated. I think that’s much more of what a film festivals about,” Capo said.