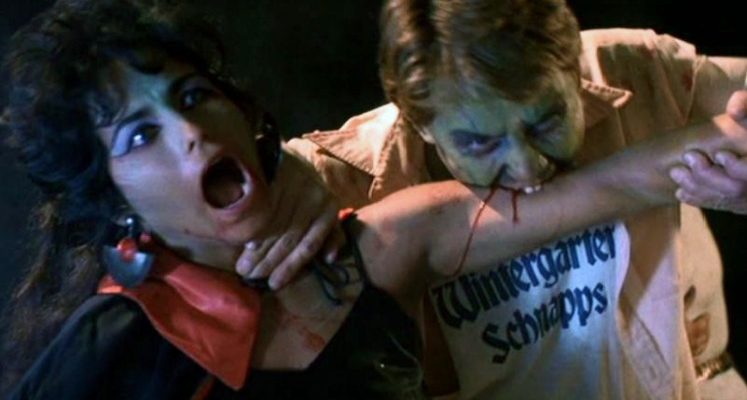 Review: A crazed, occult-loving uncle of two innocent nephews breaks down their door wielding a bloody cleaver, but calmly bestows on them two ancient amulets that he tells them will give them great power to some day raise the Egyptian goddess Sheetar from oblivion. The uncle promptly leaves his nephews and they watch him get gunned down by a squad of cops waiting outside their door. Decades later, the two brothers – Michael (Rick Burks who was killed in real life shortly after this film was released) and George (Carl Crew) – have fully embraced their crazy uncle’s legacy, and they dig up his grave, hack open his skull and remove his brain and eyes and do some magic to revive his spirit so that he can talk to them from his pickled brain/eyes state and tell them what to do. They summarily begin hunting down and hacking up women on his order, in the hopes of preparing a blood feast sacrifice for Sheetar, who already has a body (played by the always nude Tanya Papnicolas), but is in need of a soul in the form of a virgin offering. The two insane brothers slaughter every woman in sight, including a squad of topless jazzercising cheerleaders, hookers, chicks having sex with their boyfriends in dark caves, and anyone else who gets in their way. The climax at a punk rock concert is an anything goes champagne blast of nutsoid energy where the naked Sheetar grows a giant mouth in her chest and swallows the heads of her sacrifices!

A pure 80’s analogue fever dream of horror, gore, and nudity, the inspired Blood Diner is like an unrated punk-powered Garbage Pail Kid movie for lovers of great bad taste movies. Director Jackie Kong (The Being, Night Patrol) gave the film a truly unique flare for the wild, and the rockabilly soundtrack also gives the movie an off-kilter vibe.

If you’ve never seen Blood Diner, there has never been a better time to catch it than now with Lionsgate’s “Vestron Video Collector’s Series” Blu-ray release, which offers a gorgeous HD widescreen transfer of the film, along with a brand new commentary by Kong, as well as newly produced featurettes, and an archival interview with consultant Eric Caidin, who was a fixture of Hollywood for many years. It brought a smile to my face to see Eric interviewed, as I personally knew Eric for a very long time. Also included on the disc are trailers, TV spots, and a photo gallery, all of which make this release a primo example of how to do a retro Blu-ray release correctly. Lionsgate will only be doing a single pressing of these Vestron Blu-ray titles, so pick one up while they can still be had.