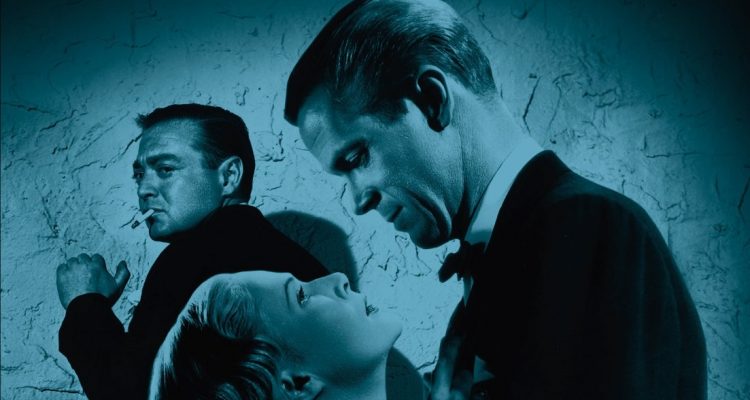 Black Angel – like many film noir mysteries of the ’40s and ’50s – capture Hollywood, California in a magical era so indelibly. This one is no whirlwind classic, but it’s a good one with some stylish camera work (the opening shot is fantastic) and performances.

Plot: When Kirk Bennett is convicted of a singer’s murder, his wife tries to prove him innocent…aided by the victim’s ex-husband.

Review: A beautiful singer is strangled to death in her Hollywood apartment, and the last person seen leaving her room is a married man named Kirk Bennett (John Phillips). Detectives intercept him at his home where his unsuspecting wife Catherine (June Vincent) finally realizes that her husband has been cheating on her for a long time. Despite the evidence against him, Catherine takes her husband’s side, and a jury finds him guilty of murder. She despairs because she truly believes he’s innocent of the crime. Not willing to sit idly by as Kirk awaits the death penalty, she begins investigating on her own against the police department’s urgings. She finds the singer’s alcoholic estranged husband Martin (Dan Duryea) drinking himself to death in a flophouse, and when she implores him to help her find his wife’s true killer, Martin comes alive with purpose because he also believes his wife was killed by someone else, namely a shifty nightclub owner named Marko (Peter Lorre), who may have been involved in shady dealings with his wife. When Catherine and Martin team up, they go undercover in Marko’s nightclub to angle in on his business and his belongings, but when Marko catches them in the act of trying to find clues the police may have missed, their fates – and the fate of Kirk, who is to be executed in the next few days – will turn.

A solid enough whodunit mystery that wraps up quite nicely within 80 minutes, Black Angel – like many film noir mysteries of the ’40s and ’50s – capture Hollywood, California in a magical era so indelibly. This one is no whirlwind classic, but it’s a good one with some stylish camera work (the opening shot is fantastic) and performances. If film noir is a genre you’re interested in dabbling with, Black Angel might not be the best, most ideal place to start, but it’s one to watch after investing in the more-well known ones like The Maltese Falcon, The Big Sleep, and This Gun For Hire. From director Roy William Neill.

Arrow Academy’s new Blu-ray of Black Angel comes in a newly restored transfer, plus a new audio commentary, a new video appreciation, the trailer, original stills, and a reversible sleeve with two choices of artwork.