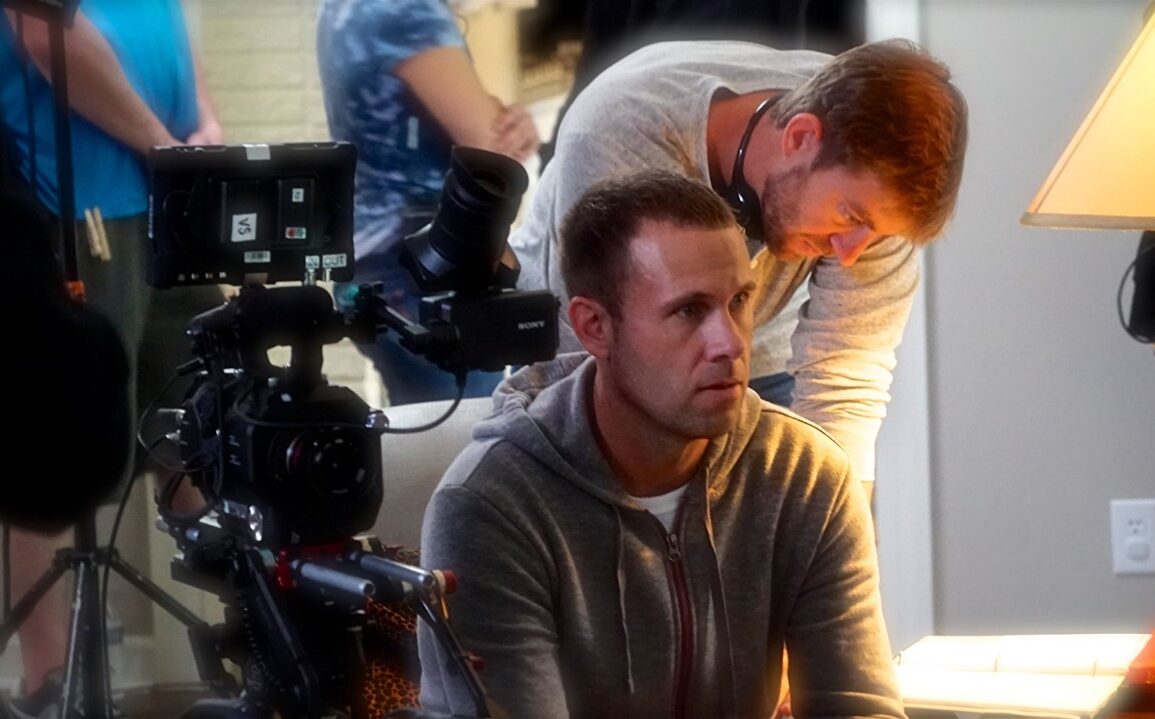 You’ll need two things to get through March release The Terrible Two : a pillow to cower under and a tissue to blow your nose with,  as writer/director Billy Lewis explains.

Top flick! How’s the feedback been?

Thanks.  We had a private screening for cast/crew and family/friends several months back and got an overwhelmingly positive response.  We also had one public screening for those who knew nothing about The Terrible Two and many were surprised by what we produced.

Let me be upfront, we made this entire feature film for UNDER $35K!!!!   That’s insane.  I’ve had much bigger budgets on 30 second TV Commercials that my production company has produced.

And who would you say are your main target market?

Our main target is anyone who likes a good scare and a good story.  We feel like anyone from 12 to 80 will enjoy this film and be entertained.  If you’re over 80 we would advise not watching, it might mess with your pacemaker….if you happen to have a pacemaker, haha.  If you take the film for what it is and don’t read to much into it then you will be entertained by The Terrible Two.

How do parents like it? There’s some tough moments in it!

In the screenings we had, we actually had several people crying at certain parts in the film, including parents.  We tried to bring emotion into the story and not depend on blood and gore to carry the movie and I feel we accomplished that.  For anyone who’s lost a loved one, which is all of us,  you will be able to relate to overall theme of ‘The Terrible Two.’  So basically what I’m saying is the entire world needs to watch this movie, haha.

How long had you been working on it for?

I wrote the script in about 2 months and we did 2 months of pre-production and then shot the entire movie in under 10 days.  Again with such a tight budget we had to be really smart with how we did things.  We had some really talented producers and a very talented crew working with us.  Our two main lighting guys had worked on the uber successful film ‘The Conjuring’ so they were no strangers to lighting a paranormal/horror film and they did an amazing job during production.  I’m glad the film will finally see the light of day and hope everyone gets a chance to watch the movie.

Was it tough to entice parents to lend their kids to a movie like this, with such heavy themes?

Not really.  The material is very sensitive, but we had very professional actors playing the roles of the 2 little girls and they did a phenomenal job.  The parents obviously were on set for every scene we shot with them and I worked very closely with the children and their parents to reassure them that we wouldn’t ask them to do anything that made them feel uncomfortable.

Do you both have a personal favorite character or moment in the film?

My personal favorite character was Nebula.  It’s a very small role but the actress Tracy McMullen did a very good job for us.  Also, I thought that Cari Moskow who played the role of Rose Poe knocked it out of the park and brought emotions to scenes that I didn’t think could be pulled off.  Again, we moved very fast and had very little financing so I’m very proud of what we accomplished with this movie.

What do you hope audiences get from the film?

I hope audiences just sit back and sit up in their seats during certain parts of the film and just enjoy the movie for what it is.  We know it’s not the greatest movie ever made but again with what we had to work with we feel like we’ve made a very entertaining movie.

Is there a genre you haven’t tackled that you’d like to next?

I love comedy and most of my short films I did before doing feature films were comedy.  We have a couple of comedy TV pilots we are doing soon that I feel will turn out well.  I just love telling good stories no matter what the genre is and I hope this film and all future projects will resonate with audiences.

What’s one thing people don’t know about independent filmmaking that you think they should know?

One thing I feel all should know is how hard it is to find money to make movies.  If I had unlimited funds I’d probably have 20 feature films under my belt.  Not saying they would all be good, haha, but I would’ve made them.  With that being said I’m thankful for the path I’m on and the things that God has blessed me with in my life.  So as an independent filmmaker you have to be persistent and you have to believe in your talents and keep fighting for what you want no matter what anyone might say about your work.