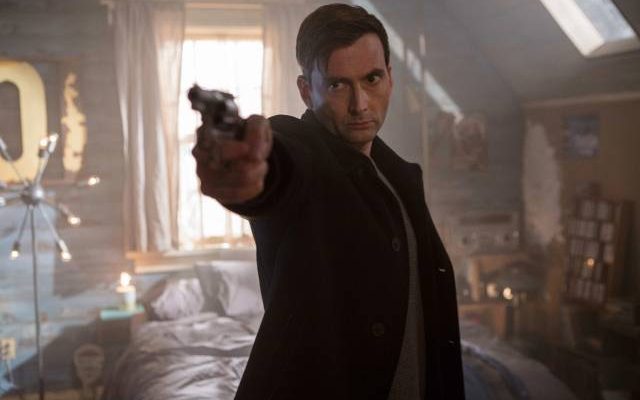 Bad Samaritan is one of the most intense movies of the year and definitely worth checking out for David Tennant alone as he has never been better.

Plot: A valet (Robert Sheehan) develops a clever scam to burglarize the houses of rich customers. Things go smoothly until he robs the wrong customer (David Tennant), and discovers  a woman being held captive in his home.   Afraid of going to prison, he leaves the woman there and makes a call to the police, who find nothing when they investigate. Now, the valet must endure the wrath of the kidnapper who seeks revenge on him, all while desperately trying to find and rescue the captive woman he left behind.

Review: Bad Samaritan is the hotly anticipated new horror thriller from director Dean Devlin; it stars David Tennant in career best form as a psychotic killer who is out for revenge after a burglar discovers a girl chained up in his house.

This is edge of your seat stuff with nail-biting tension throughout; Tennant’s wild eyes have never been more sinister than in this movie and only he could make having a sip of coffee look threatening. He comes across like Buffalo Bill from Silence of the Lambs at times and has never been creepier.

I liked how it’s a morality play where our protagonist Sean Falco was a thief and a liar and yet is still a sympathetic and amiable character who is in way over his head. The story has several twists and turns keeping things unpredictable and the tension keeps ratcheting up towards a satisfying finale.

My biggest issue with the film was just how stupid or unwilling to help everyone in law enforcement was; it felt like a bit of a stretch and I had difficulty believing that would happen. Maybe it could but it I’m pretty sure if you reported finding a chained up girl people would take it more seriously…

Overall, Bad Samaritan is one of the most intense movies of the year and definitely worth checking out for David Tennant alone as he has never been better.