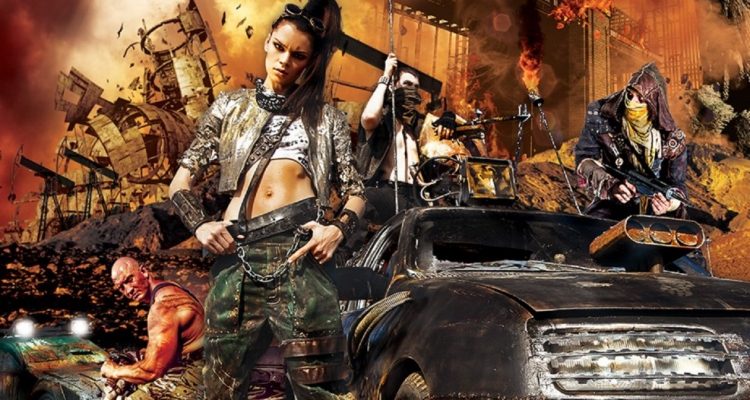 Despite an interesting concept Atomic Punks fails to deliver anything new or exciting for the genre.

Plot: Three women struggle to survive by playing gigs for the wretched remains of society after a nuclear war. When the death of a Vicious Thugs gang member gets pinned on them, they go on a cross-country chase that ends in an explosive showdown in the junker lots of New Vegas.

Review: A rock band called The Ex-Girlfriends comprised of three embittered and tough punk chicks rides around the post-nuke wasteland in a jeep, looking for paying gigs where they can perform a few songs for some grub and some coin. Most of the time, they’re jilted and stiffed, and more likely than not, they’re assaulted by creeps and smacked around by marauders looking for a thrill. When, during their latest gig, they kill a guy for trying to rape them, the dead guy’s brother and his gang make it their mission to track The Ex-Girlfriends down to kill them in revenge. As The Ex-Girlfriends flee, they encounter various other scuzzoids and wasteland rejects as they make their way to the ultimate gig in New Vegas.

I’m willing to try anything when it comes to end-of-the-world themes. Bring it on, I can take whatever you throw at me. I’ve seen it all, and I’m almost always willing to give it a fair shake. The incorrectly named Atomic Punks is a tough sell, though. It runs about 70 long minutes, and it’s inexplicably interspersed with faux behind the scenes footage of actors playing the director, composer, producer, and so forth, as they wax on and on about the importance of Atomic Punks and its contribution to the post-apocalyptic genre. It’s really, really weird. It’s as if the real writer / director Regan Redding knew he only had so much footage to work with, and he deliberately padded out the runtime with the bogus behind the scenes stuff, and he knowingly acknowledges that technique. The film becomes a bit more artistically interesting with Monty Python-style cutouts and puppetry for entire scenes (such as an action scene that might’ve been too complex to shoot for real), but the film is glaringly bad on any level. The actresses in the lead role appear to perform their own songs, but their line deliveries are pretty terrible. Clearly, there was a script here, but the dialogue is startlingly misogynistic and cruel (not to mention just nasty and ugly), so no points there either. The concept is something that could be worked with, but Atomic Punks isn’t the movie to deliver on such a concept. Best left to obscurity.