An adequately produced three-part miniseries that brings an older, nostalgic title back into the mainstream, Are You Afraid of the Dark? relies heavily on the resurgence of kid-centric horror in the vein of the recent It films and Stranger Things.

This three-part, self-contained limited series is about the newest member of the Midnight Society, her first scary tale, and what happens to the group when the terrifying events of her story start to actually happen in their small town.

New girl in town Rachel (Lyliana Wray) has a tough time adjusting to her new school, and she’s haunted by nightmares of a sinister circus master named Mr. Tophat whose carnival of doom has its evil eye on Rachel. When some other kids in school target Rachel for induction into their “Midnight Society,” they put her through some horror trivia tests and then the final trial comes when she’s forced to create a scary story on the spot, and when she passes the test (she tells a good one about Mr. Tophat), she’s officially inducted into the secret society. The next day, Mr. Tophat’s circus comes to town, and Rachel and her Midnight Society friends get freaked out by the fact that Rachel’s story begins to manifest in reality. Add to the fact that there’s a missing kid from their school who may or may not have been taken by Mr. Tophat’s minions, and these kids gear up for a trip to the evil circus where they hope to find the missing boy from their school. Being kids, they’re woefully unprepared for how deep and dark Mr. Tophat’s magic really is, and when one of their own team disappears the next morning and nobody but Rachel has a memory of the circus at all, Rachel realizes that she’s impervious to Mr. Tophat’s sorcery. It makes her job that much more difficult to convince her friends that something seriously evil is going on, and once they’re all on board they’ll have to track the carnival down in the next town to reclaim their friend and put an end to Mr. Tophat’s reign of terror.

An adequately produced three-part miniseries that brings an older, nostalgic title back into the mainstream, Are You Afraid of the Dark? relies heavily on the resurgence of kid-centric horror in the vein of the recent It films and Stranger Things. This isn’t quite in the same league as those, and it’s missing a certain sense of identity and style, but it casts Jeremy Ray Taylor from the It movies to have some recognition value (he’s great), which helps. It’s from the director of Project Almanac, and if it had tried a little harder to rekindle some Ray Bradbury juice from Something Wicked This Way Comes, it would have worked even better. It feels too streamlined to strike lightning.

Paramount will be releasing this package on DVD this August, so keep an eye out for it. It has several special features, and all three episodes of the show are on one disc. 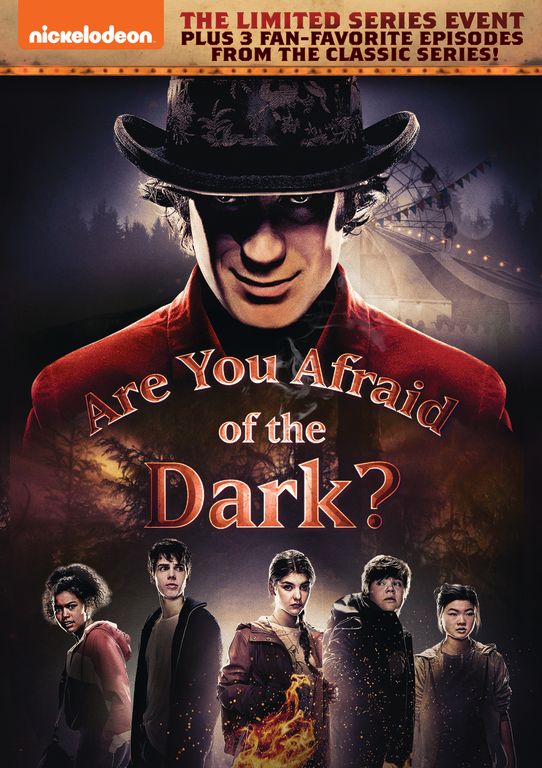