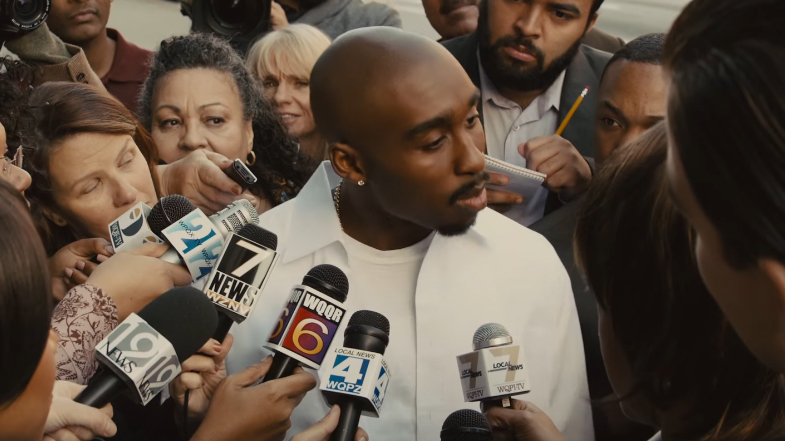 All Eyez on Me is essential viewing for Tupac fans and despite a few niggles with the supporting cast and the glossing over of several details in Shakur’s life it really was massively entertaining.

Plot: The true and untold story of prolific rapper, actor, poet and activist Tupac Shakur (Demetrius Shipp Jr.), from his early days in New York to his status as one of the world’s most recognized and influential voices. Against all odds, Shakur’s raw talent, powerful lyrics and revolutionary mindset establish him as a cultural icon whose legacy continues to grow long after his death.

Review: The life of Tupac Shakur was never a dull one and when he was tragically killed over 20 years ago I remember everyone talking about who did it and why. This movie doesn’t try to explore that but goes into how Tupac lived and his meteoric rise to fame.

I don’t think I’ve ever watched a biopic where it was like looking at a ghost; at times newcomer Demetrius Shipp Jr. looked so alike the late rapper/actor that it was uncanny. He does a fine job as Shakur but I can’t help but feel that he’ll always be remembered as “the guy who looked like Tupac Shakur” so he may be typecast.

I’ve read a couple of scathing reviews of the movie but personally I enjoyed every minute of it; it does gloss over a few points and maybe makes him look like he wasn’t responsible for any of the trouble he got into but was always in the wrong place at the wrong time. Several supporting cast members also look nothing like the people they are playing, for example Jada Pinkett who was Tupac’s lifelong friend. The audience also burst out laughing any time Snoop Dogg was on screen because Jarrett Ellis didn‘t resemble him in any way and was clearly dubbed.

We all know Suge Knight is frankly a terrifying individual and the movie shows that at several times but that’s no surprise as we’ve all heard the stories of how he ran Death Row Records and it was also careful to try and not implicate him in the murder of Shakur. Any time he is on screen there is always this tension and air of impending threat.

We are shown Tupac’s untold story of his youth and how he grew up in New York and Baltimore before moving to Los Angeles where his life would change forever.

The most interesting aspect of the story was exploring Tupac’s activism and how important his mother was in raising him where she started out as a Black Panther but would eventually start doing crack and send her son away to LA. She cleaned herself up though and become a major influence in his life.

I liked how it didn’t skim over the fact that Tupac was perhaps a little naive when it cam to things like money and getting manipulated by the sharks in the music business as this was something I’d heard a lot about in a recent documentary about his life.

The music is obviously awesome using all of Pac’s classic tunes like California Love, America’s Most Wanted, Dear Mama and many more so you’ll be bobbing your head throughout.

It really covers the major aspects of his all too short life and by the time the end credits role you can’t help but think how much he achieved in such a short period of time and the fact that a movie has been made about him shows what a cultural impact he made on the world.

Overall, All Eyez on Me is essential viewing for Tupac fans and despite a few niggles with the supporting cast and the glossing over of several details in Shakur’s life it really was massively entertaining.