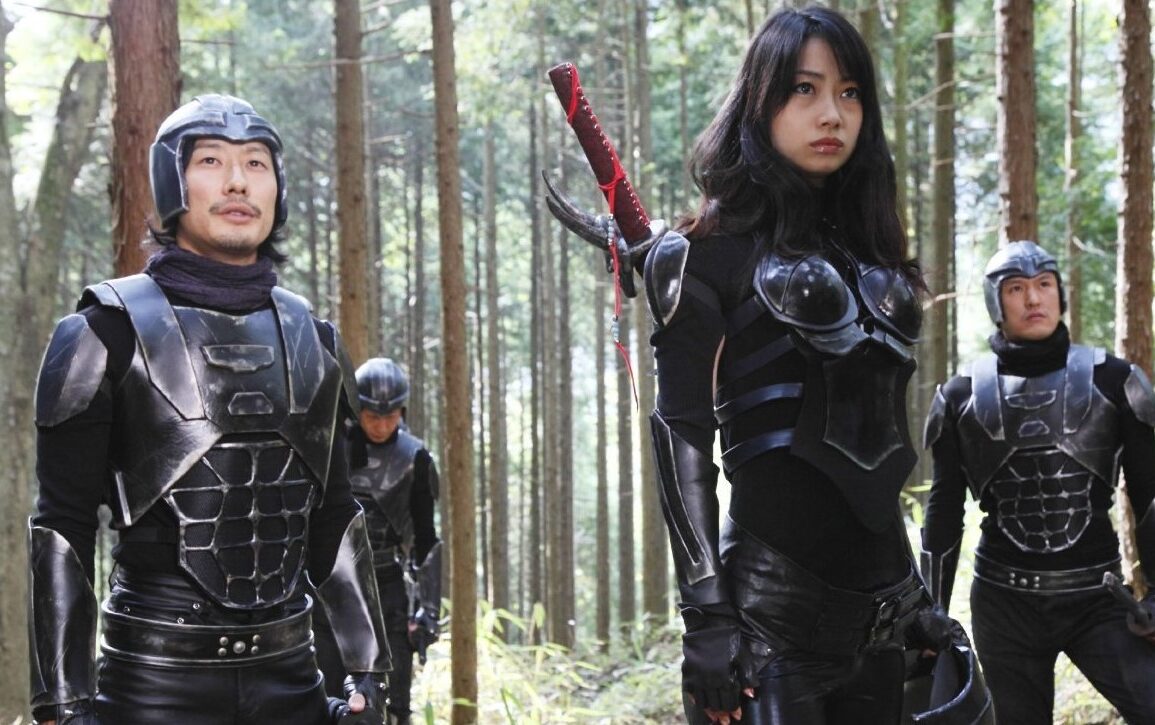 Alien vs. Ninja is a bunch of cheesy fun, with generally well-choreographed action and a fun feel. Just don’t think it’s anything more than that.

Plot: A group of ninjas are deployed to investigate a mysterious fireball that plunged to Earth, not realizing that inside the fireball were a trio of pissed-off aliens.

Review: Well…I mean, it’s called Alien vs. Ninja. That about it sums it up! Oh, you want more? Oh…okay.

The story is okay. Literally, what you see is what you get. The aliens come to Earth, and the ninjas find them, the aliens attack, etc.  The movie doesn’t try to be anything it isn’t, which I guess is good because you can’t come out of the film and complain that you didn’t get what you paid for.  They tried to do a bit of a twist at the end, but it’s one of those twists that is terrible because the twist and its consequences are irrelevant – it concerns a minor character in the film who has zero impact, so you don’t care.  The director admitted there was a whole B-movie Roger Corman style he was going for with the storytelling, so you know it’s not going to be a highly-sophisticated plot that keeps you guessing.

The good news about this movie is, it’s incredibly shot, clocking in at around 80 minutes. Generally, the downfall for straight-forward films like this is that it takes forever to get to the action, and you’re left with the story struggling in character development when you know the characters don’t matter a damn – just the aliens and the mayhem. So at least, if you’re not a big fan of the concept or the storytelling style, you don’t have to put up with it for long.

As for said action, it’s pretty good, though a step below superb. I’m sorry to say there are moments of shaky-cam, and even though those moments are minimal, it is annoying. I will say that there are several fights, which at least keeps you entertained throughout. The aliens themselves are interesting conceptually but not always realized in a convincing matter. For those of you who hate CGI, the aliens are mostly puppeteered, so you don’t get any eye-rolling CGI, but I know a lot of people won’t get what this film is going for and complain that the aliens look cheesy – which they do – but that’s the point. Another surprising note is, the cinematography is breath-taking – I have no idea why, but the director really wanted to capture the vastness of the Japanese forests and mountains, and it’s a visual treat. It just seems odd in a film like this.  The soundtrack is energetic, and there is a sufficient amount of gore in the movie.

The characters themselves are alright, though nothing really to write home about. They are more archetypes (the narcissistic one, the girl who is driven to show she belongs, the hot-headed leader) than characters who feel like living, breathing human beings, but they generally didn’t piss me off. The one possible exception is the comic relief ninja, who feels out of place simply because he is so hapless, and runs away from everything – you would think that the standards of being a shinobi would be a little higher.

So, did I like this movie? Yeah, it was entertaining. It’s not going to be one that you’re going to dissect with your buddies; it’s one you throw in, laugh at, enjoy the fights and the cheesiness, and then call it a night. Any other intention will miss the point and just cause you to wail at your television for no good reason.