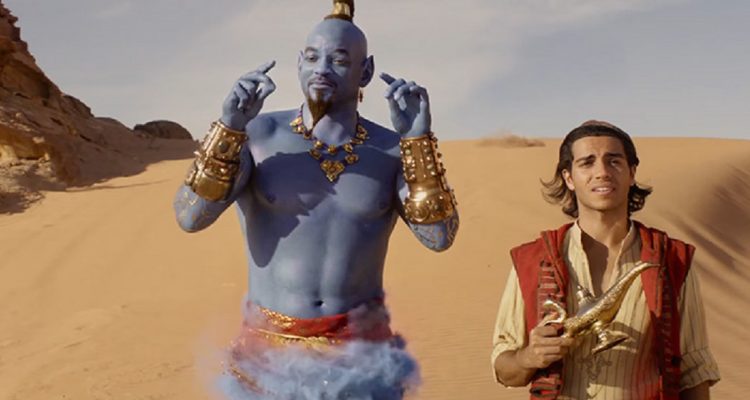 While incomparable to the original film, Aladdin is a thoroughly fun and nostalgic movie that the whole family can enjoy.

Plot:  A remake of Disney’s classic 1992 animated film, Aladdin follows the story of a ‘street rat’ thief who longs to be someone else. When the opportunity comes to have his every heart’s desire granted through a lamp, he uses this chance to win the heart of Princess Jasmine.

Review: First off, let’s get this elephant out of the room: Will Smith as the genie. As fun as it is to see Disney classics reimagined in live action, I can’t help but wonder if it’s all that necessary; the 1992 classic Aladdin was so magical that it’s difficult to imagine a version that could ever hold up to Robin Williams’ iconic portrayal.

In all honesty, Smith’s depiction was pretty enjoyable and garnered the majority of the laughs for me. His smooth, cool demeanor was a fresh take on a character that is so beloved in our hearts—and still is. Of course nothing can replace Williams as the original genie, but you could tell that Smith brought his own personality to the character in a respectful way. Although the other characters, not so much.

While Princess Jasmine (Naomi Scott) brought heart and passion to the role, the rest of the characters simply fell short. Jafar’s role, for instance, felt like his villainy was too forced and cliché. Nothing new was brought to these characters save for all their extravagant costumes—Aladdin included.

Played by Mena Massoud, Aladdin was…well, Aladdin. A playful thief with a soft heart, Massoud played the hero well; however, there was just no magic in his performance the way you’d feel when you watched the original. This was a constant reminder throughout the film. Indeed, the comparisons were inevitable, but it felt like the movie did not capture the “Disney-ness” that we all know and love. Still, there was something about knowing what the next scene was that still added excitement as a viewer.

The songs are the same as the original with a few tweaks but Princess Jasmine now has a couple of her own musical numbers which are lame and feel tacked on.

Overall, Aladdin isn’t a patch on the original classic, but if you can let that go and watch it as is, it is a thoroughly fun movie that the whole family can enjoy. The nostalgia and music certainly helped balance out the underwhelming performances as a whole—something any Disney fan would appreciate.