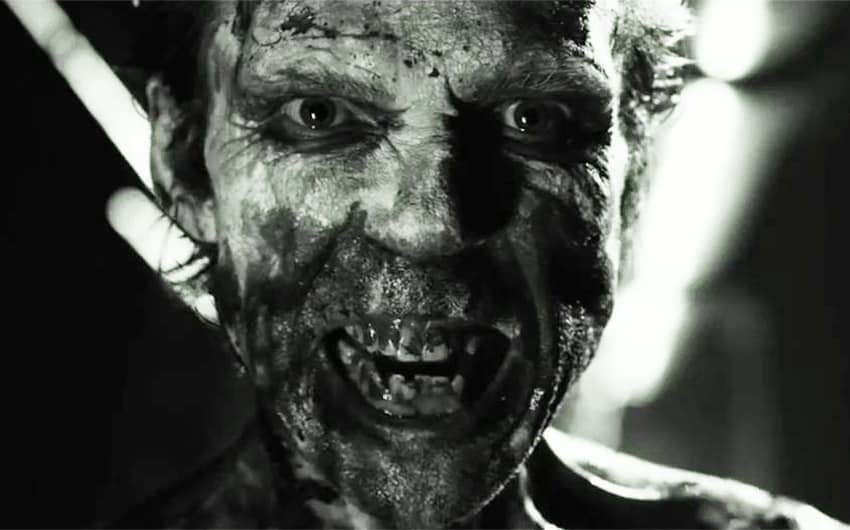 You may not recognize Richard Brake by name, but the roles he has played have left lasting impressions on countless viewers. Brake got his start in British sitcoms and low-budget horror films, and only a handful of years later, he was appearing in projects like COLD MOUNTAIN, MUNICH, PEAKY BLINDERS, SPY, and BATMAN BEGINS.

In recent years, he has had memorable roles as “The Chemist” in the Nicolas Cage psychedelic revenge film MANDY, the Russian mobster “Vlad” on the long-running Showtimes series RAY DONOVAN, and the villainous “Night King” in seasons four and five of the hit HBO series GAME OF THRONES. His most notable role though, may be the make-up wearing professional killer from, Rob Zombie’s take on “The Most Dangerous Game”, the brutal horror film titled ’31’.

Now, Richard Brake has reunited with Zombie for 3 FROM HELL, the third entry in the film series about the murderous Firefly family that began with 2003’s HOUSE Of 1000 CORPSES and continued two years later with THE DEVIL’S REJECTS. Brake plays Winslow Foxworth Coltrane, a relation to the Firefly family who appears on the scene after the surviving members of the clan are placed in prison following the bloody climax of THE DEVIL’S REJECTS.

I had an opportunity recently to sit down and talk with the soft-spoken Welsh actor about his acting process, working with Rob Zombie and the rest of the cast of 3 FROM HELL, plus a lot more.

How do you prepare for a role like Winslow Foxworth Coltrane?

I’d bore your pants off if I told you exactly what I did. I studied acting for a lot of years when I was younger. I do a lot of different things, but one of them, I always find a history for the character. I think that’s really important. Then I’m comfortable now playing characters, from the dark side, shall we say? A lot of that is it has become easier, and that’s partly because, at some point, I just really realized that if you’re going to play these kind of roles … you have to be really unafraid to explore that [dark] part of yourself as a human being, because we all have it. All of us have goodness, and all of us have a lot of badness in us, too. We don’t act on it, thank God, and most of us try and sensor it when it comes into our thinking, but, as an actor, we can’t really do that. I think I just stopped censoring my bad side and let it come out when the cameras are running.

Tell me about what it’s like being dropped into an already established ensemble.

I think what’s so great is that Foxy’s such a unique character. Rob [Zombie] really allowed me to run with it, and just bring another flavor to this incredible world that he’s created over the previous two films, and now continued into 3 FROM HELL. I didn’t feel any anxiety really because he was so … Rob had written such a great character, in Foxy, and really trusted me to pull it off, and I just went with it. We had a lot of fun doing it. We improvised quite a bit at times, and so it’s really more of… rather than [feeling] anxiety, it was more like joy and excitement to create this guy and add [him] into the mix that is the “Firefly” universe. That was my feeling, like a racehorse waiting to get out of the gate and run. I really wanted to just see how the character developed. 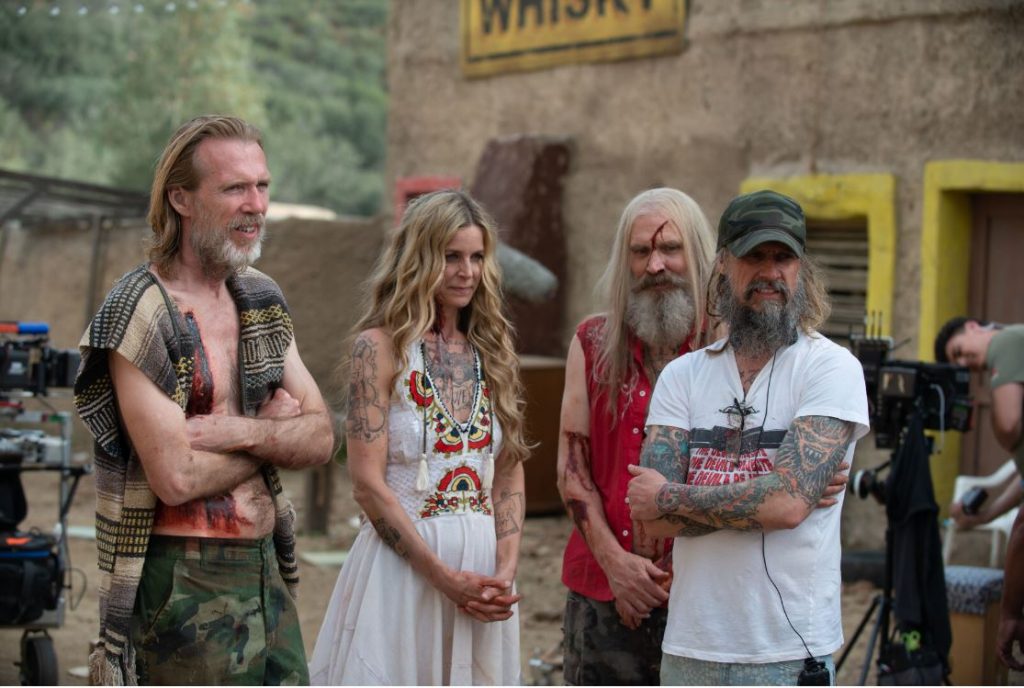 You’ve worked with Rob Zombie a lot now, and he seems like a director who has a very clear idea of what he wants from his crew. Tell me about your working relationship with him.

I mean, it’s incredible. Rob is my favorite director. I just love, love working with him. He is incredibly creative. He has a real vision for everything that he does creatively, whether it’s music or film or art. He does a lot of different things. He’s a Renaissance man. To be a part of that… I think he just instinctively senses people that he could work with and he likes and that bring what he needs as the director. I mean, there isn’t really anything that I can say like, “Oh, he says, ‘Do this.'” He’s never like that. He really just gives you an incredible amount of freedom.

I said before, he’s written amazing scripts, [for example] the character of ‘Doom-Head’, when I did 31, I didn’t improvise very much at all because he was very specifically written in a certain way, very tight, very controlled, and… that was there on the page. Whatever I brought to it is what Rob wanted, and somehow it just gelled, and likewise with Foxy. Foxy is a lot looser though. I had a different look, a different energy. Rob encouraged a lot more improvisation. He would come up with all these crazy ideas that he’d asked me to go and try out… usually on Bill [Mosely] [laughs]. So, Bill would have to wait until I came up with some weird stuff and then react to that, which Bill does brilliantly. He’s a great actor.

I was going to ask about your scenes with Bill. They feel very improvisational in a good way. Very natural.

Honestly, all those moments that we’re together, you get those family moments between the three of us that I just really felt very special when we filmed them. My first scene was one with just me and Bill, and then Sheri [Moon Zombie] comes in. That was my first day shooting. Right away, it just clicked. Rob had me do some crazy improvisations about where I saw the future of Bill and I and where we may eventually be going. I loved all those ideas that we just bang off each other… and then Sheri. They’re such good reactors and freedom is a good thing for an actor, and your imagination is so free and unafraid when working with the three of them. I really enjoyed all the scenes we did together, I loved doing them. I’m pleased a lot of people have been saying that they felt that they worked, so well, on screen… because they felt like they worked, when we shot them.

3 FROM HELL goes to some very dark places, but the scenes of just the remaining members of the Firefly family give it this warm, goofy heart that really makes you care about these characters, even though they’re such despicable people. It’s really an interesting dichotomy that Rob Zombie’s created with this whole series.

He’s brilliant like that. I mean, he’s brilliant, because he shows that they’re human beings. He doesn’t try to paint them as monsters, even though obviously they’re sociopathic murderers [laughs]. He gives them real human qualities, and it really appeals to, I think, the rebel in us all, in the outsider because we are just humans. We’re not outsiders in the sense that we’re going around murdering and doing all the crazy shit that the characters do on screen, but all of us feel that love of the outsider. A lot of people that love Rob’s stuff, including myself, get that feeling that we’re just slightly outside the norm of society. I think most of our fans feel that a little bit. 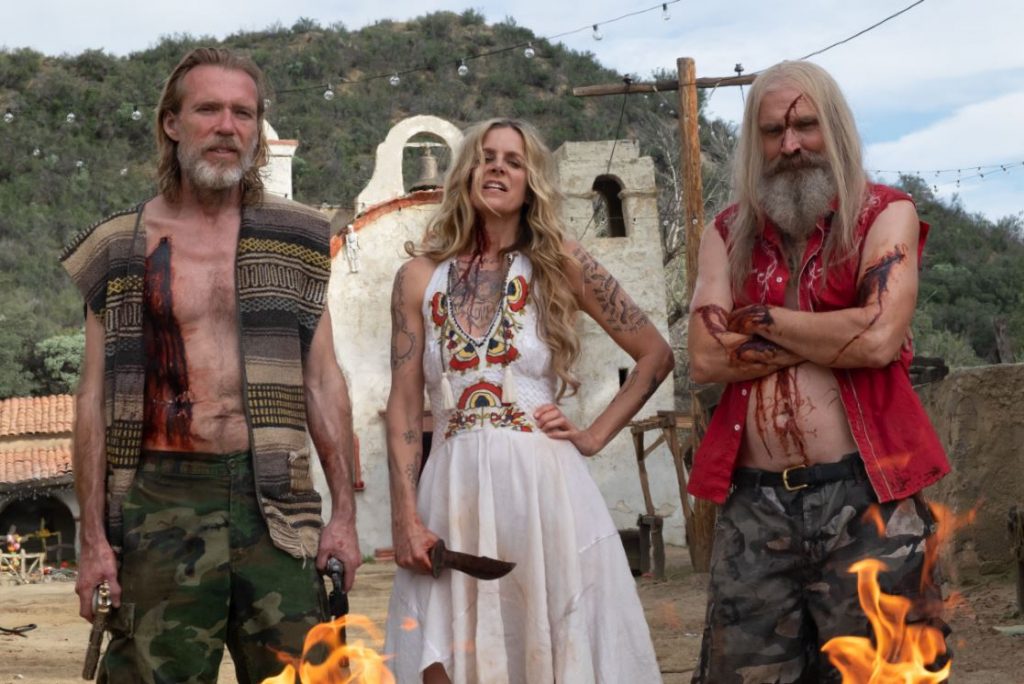 What was your favorite memory or experience from shooting the film?

I think arriving, because I was shooting another film right before, and so I literally wrapped that film, flew to London where I live, changed my underwear, and got ion a plane, went straight to LA, and they’d been shooting for about three days, and getting there, and they were at lunch when I arrived on set, and Sheri came out with a big hug … I mean, it was lovely. She’s like a sister. It was lovely to see her and get a big hug, and Rob, obviously, it was brilliant to see him again, and Jeff Daniel Phillips, who’s a close friend. People use that expression, “Like a family,” but there is that feeling and THEN there’s the feeling, not just any old family, but a family of creativity because Rob inspires everybody to be so creative. It’s incredible how much inspiration he gives off to everybody, not just the actors, but everybody involved. I think that you could just feel that as YOU walked in or I could just feel that as I walked into the canteen as they were in the middle of lunch, and, of course, seeing all those really old friends again. That was probably my favorite moment. I’ll never forget that.

I always go back to the one that really blew me away, THE TEXAS CHAINSAW MASSACRE, the first one. I saw it for the first time not quite when it came out, but early in its run, late in the 70s when I was still young, and the idea of horror not … It isn’t just real. It wasn’t like … Suddenly, it looked very real. It totally changed my view of everything. It’s scared the bejeebies out of me, and, God, I love all Westerns. I’d say the Sam Peckinpah one with Bob Dylan – PAT GARRETT AND BILLY THE KID.

If you could recommend one of your performances to someone who may not be familiar with your work, which one would you choose?

I would say 31 unless you’re absolutely terrified of horror, and then, of course, once this comes out, I would definitely say watch both 3 FROM HELL and 31 because you’ll see two variations of crazy performances. Obviously, my next one is always my favorite, but I was really proud of the work we did in 31.

My son just watched it for the first time actually. Him and his mates all rented it when they were out staying at a house together. It makes me a cool dad. [laughs] 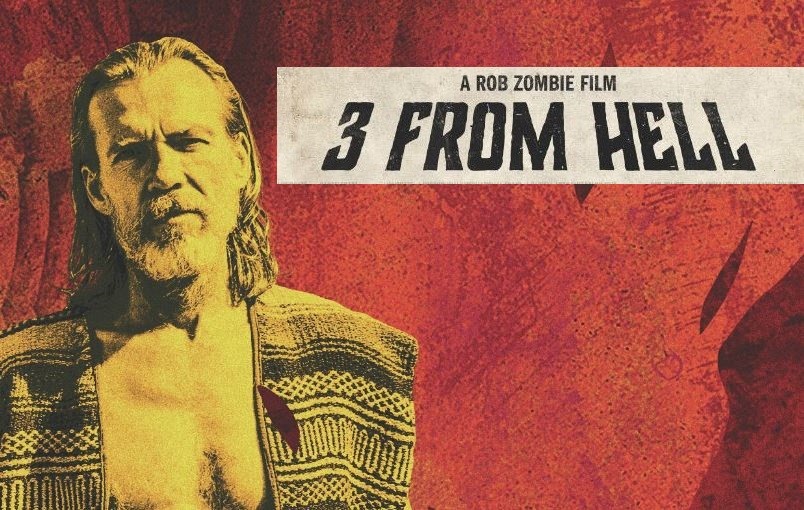 Your opening monologue in 31 is really an “all timer”. It’s a great way to start that film.

Rob wrote that completely. I literally didn’t change a word of that. I just memorized it. We just shot three takes of it, and then that was it. Then it was Rob. My only thing was, I knew Rob didn’t want to cut away [from me] until he really had to, and I thought, “Well, I got to get this right.” The longer Rob holds on me, the better a job I’ve done, and he held on me for quite a while. So, I was pleased.

Thank you for taking the time to talk with me today, Richard. I enjoyed the film and wish you nothing but success with it.

Thanks and take care, Matt.

Tickets for the upcoming September 16th/17th/18th nationwide release of 3 FROM HELL are available at www.FathomEvents.com/3FromHell