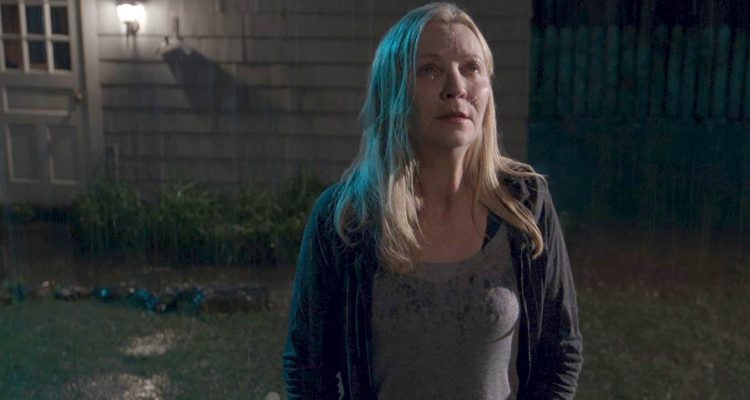 A Good Marriage doesn’t do anything particularly wrong, but it’s also not particularly good, either.  If you’re a Stephen King die-hard, check it out; otherwise, this one will probably not be of interest to you.

Review: When I found out that they had made an adaptation of the Stephen King novella A Good Marriage, I admit that I was more than a little surprised.  I know that Hollywood generally tries to make an adaptation of every single thing Stephen King writes (in fact, I fully expect a movie to come out soon called “Stephen King’s Grocery List”), but this one was a little different.  Not because it was bad or anything; it was just so…ordinary.  Inspired by the BTK Killer, it’s a fine story, but nothing that was especially engrossing or memorable. The fact that I now have an adaptation of this story, but am still waiting for The Long Walk, seems like a gross injustice.

The acting is fine.  Joan Allen knows what she’s doing and does her best with her character. There are a few nightmare scenes that lend the viewer a perspective into the character’s mindset, which was fine, but unnecessary; Allen’s acting told me everything I needed to know about the character’s thoughts.  LaPaglia is fine as the husband who is not all he seems.  I like how ordinary he played the guy, even when all the proverbial poop hits the fan, he keeps the same demeanor, which is kinda unnerving.  Stephen Lang is his usual kooky self, though he isn’t given much to do other than lurk and look serious.

The story is pretty humdrum.  You can pretty much figure out what is going to happen at every step of the film, and the movie does not disappoint or inspire.  It’s just there.  It’s not bad, but I am surprised by how bland it feels, considering that King himself wrote the screenplay and you would expect something more.  However, since this story is inspired by a true-life case, perhaps he didn’t want to step out of the way to sensationalize the events.  What’s left is a very competent, albeit somewhat empty story.

As for scares (as someone will inevitably always ask that when reviewing a King film), there is none. Just that disquiet you feel when the truth is revealed (about halfway through the film) and everyone tries to continue on as normal, even though you know that’s not possible.  As I said, the movie does try to insert the nightmare scenes to make the horror more overt, but it feels more like cheap tactics than an actual narrative plot device to enhance the story.  Considering the ordinariness of the characters, the film should be more minimal and ramp up the dread building in the Allen character.  They partially succeed, but I think they could have done more.

Everything else, the score, the sets, the cinematography, costumes are fine, but not especially noteworthy.  King’s best work usually is set in realistic places with ordinary, relatable characters, and you get that here – what is missing is the extraordinary circumstances that elevate the story.  When something extraordinary does happen, it isn’t treated in such a way that it heightens the danger or puts the characters at risk.  It’s almost like a blip on the radar that is only experienced by one person.  Allen does the best she can with what she has to work with, but sadly it isn’t enough.

Definitely check this out if you are Stephen King completist who has to watch every King-related film – otherwise, you’ve probably seen better elsewhere.