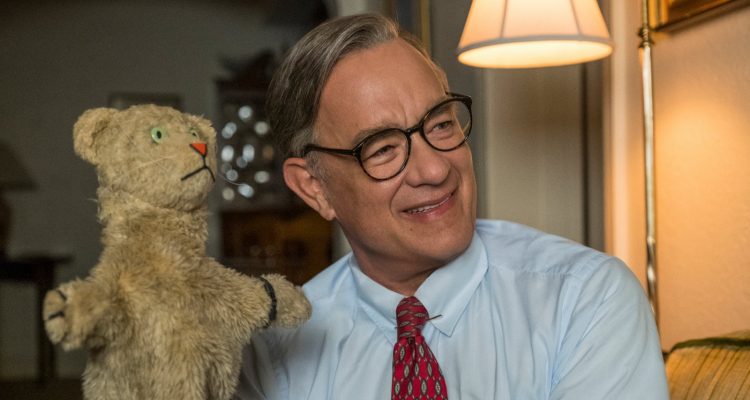 A Beautiful Day in the Neighborhood (2019) Review

A Beautiful Day in the Neighborhood is hugely enjoyable and immensely moving with Hanks on sparkling form but Matthew Rhys also being someone we can truly identify with.

Plot: Lloyd Vogel is an investigative journalist who receives an assignment to profile Fred Rogers, aka Mr. Rogers. He approaches the interview with skepticism, as he finds it hard to believe that anyone can have such a good nature. But Roger’s empathy, kindness and decency soon chips away at Vogel’s jaded outlook on life, forcing the reporter to reconcile with his own painful past.

Review: I’ve been wanting to see this ever since it came out in theatres but up until now I just haven’t been able to. I knew when I saw Tom Hanks had been cast as the iconic Fred Rogers that he would be perfect, and he truly was. He brings such heart to the role and captures the spirit of who Mr. Rogers was.

He is more of a supporting character in A Beautiful Day in the Neighborhood however, and the main protagonist is called Lloyd Vogel (Matthew Rhys); he is angry at the world and generally very cynical; he is hard to like as a person which may be why I identified with him so much. Rhys looks world weary and exhausted with the weight of the world on his shoulders.

As someone who is ornery and gets mad at everything (stupid clouds!), I waste a lot of my life being angry about things not worth getting angry about. I don’t have a reason for it, I’m just a dick; Lloyd however, has some dad issues and his relationship with his father Jerry Vogel (played by the always amazing Chris Cooper) is pretty much non-existent. Throughout the movie Jerry wants to reconcile with his son but Lloyd isn’t interested and at one point they even come to blows at a wedding.

When we find out where Lloyd’s resentments come from it’s understandable and there’s a lot to forgive but if he doesn’t he will just be on a downward spiral into sheer misery.

Lloyd is a journalist and is tasked with interviewing TV Hero Mr. Rogers and at first, he is against the idea but when they meet Fred slowly begins to grow on Lloyd and the barriers start coming down.

I spent the last half hour of this movie in tears not necessarily because it was sad but it was so tenderly written that I was emotionally engaged with the characters and their relationships.

Hanks obviously steals every scene and you sometimes just wish there were more people like Mr. Rogers in the world; we need more gentle and caring souls like him.

It’s a genuinely uplifting tale even if it’s not one you would want to watch all that often but you will maybe look at the world a little differently after viewing. I was in a good mood for about 15 minutes so that’s definitely a plus.

Overall, A Beautiful Day in the Neighbourhood is a wonderfully told story with Tom Hanks on scene stealing form as the immensely appealing Mr. Rogers. Matthew Rhys is also fantastic as Lloyd who is someone I think we can all identify with. It’s a story that came at the right time as we all need to be less cynical during these strange and difficult days.