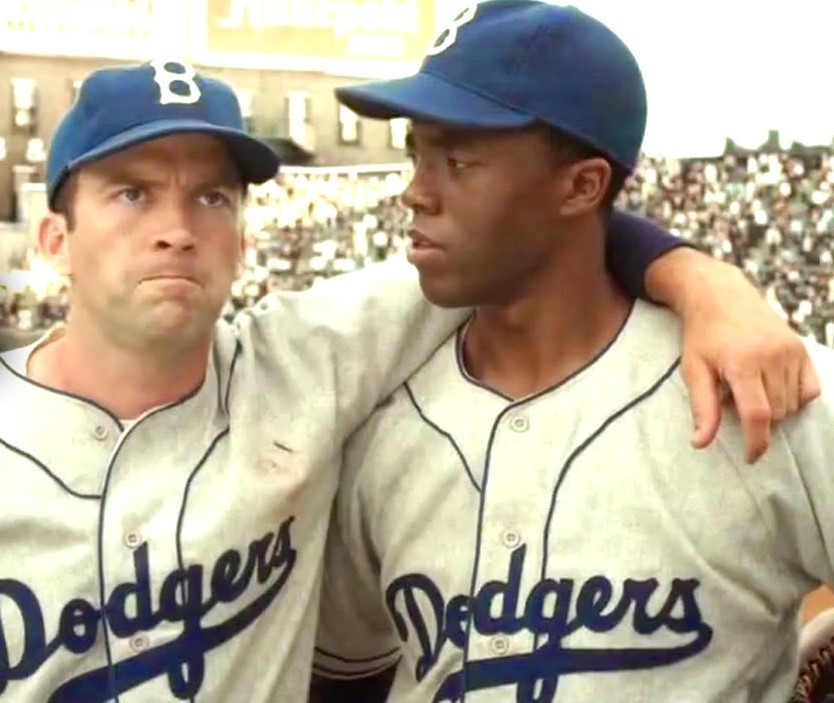 Summary: Being a ridiculously colossal baseball fan, I, of course, knew the story of Jackie Robinson; his number 42 is the only number in baseball that has been retired by all 30 teams. His was a story that begged to get the big-screen treatment, but I think it’s a challenging topic to make – people are going to be sensitive over the historical inaccuracies (of which there are many), and there would be a temptation to idealize Branch Rickey and why he chose to introduce Robinson into major league baseball.

Luckily, the movie has a stellar director in Brian Helgeland, of Payback and First Knight fame, and he does a damn good job with the story. Jackie Robinson, in the story, is a man, a very human man, fraught with his own internal turmoil and a quiet inner strength that is very evident through the film. Branch Rickey, instead of being a saviour on a white horse, pontificating about improving race relations, instead is motivated not only by business but a moral responsibility that he failed to act on years later. Instead of taking these men and making them gods, they are presented simply as human beings, with their own fallacies and challenges.

Of course, Chadwick Boseman is beyond outstanding in the role of Robinson; his screen presence dominates every scene he’s in. For the part of Robinson, you need an incredibly skilled actor to not overplay it and turn it into an angry, righteous performance. Chadwick Boseman tells more in a look, a glance, a look to the ground than an entire speech could give you. Very few could pull it off, and we’re lucky that Chadwick was the one chosen to do it. Likewise, Ford pulls off an excellent performance as Branch Rickey, showing he can still perform when motivated, instead of sleepwalking through movies like he tends to do nowadays. Ford is both gruff and surprisingly tender, impenetrable yet vulnerable. It’s nuanced work that I haven’t seen from him in recent roles.

The rest of the cast is tremendous as well.  I especially liked Andre Holland as Robinson’s confidant and a world-wise sportswriter who helps Robinson navigate the new world he’s in. Nicole Beharie is terrific as Robinson’s wife, showing chemistry with Boseman that is utterly believable. I liked Christopher Meloni’s spirited performance as the charismatic Brooklyn manager Leo Durocher. And even though it made me cringe, I have to give kudos to Alan Tudyk, who portrayed the despicably racist Phillies manager Ben Chapman with smirking conviction.

For the baseball scenes, they were all well-shot and choreographed, with Robinson’s turns at bat especially noteworthy; you literally could almost feel the pitches coming in at times (which again makes me wonder at the skill of these men who can hit a 95 mph fastball squarely with a round bat).

This isn’t to say the movie is perfect – it does play it somewhat safe, and you feel that everything is carefully constructed to avoid going too far into particularly sensitive territory. You just know that the disrespect and the challenges that the Robinson’s faced in that first year were made more palatable for a wider audience than what probably occurred in real life; I’m sure parts of it were a complete nightmare and didn’t just constitute a few idiots hurling the ‘n’ word at him.  That being said, especially in the world we live in today, I’m not convinced that this society is ready for the truth of things.

Overall, this was a very enjoyable and, what felt like, very authentic re-telling of the immortal Jackie Robinson’s first year in major league baseball. This film is sure to please baseball fans and may even touch folks who have no idea about the game. Such is the power of great filmmaking, with performers at the peak of their skill.