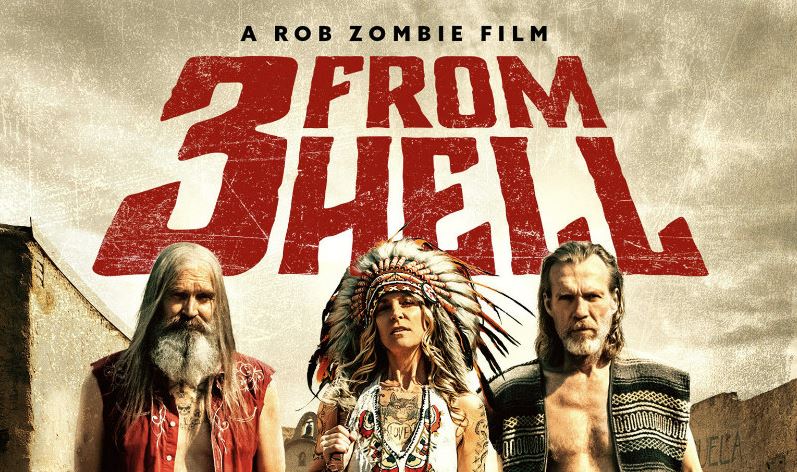 3 FROM HELL is a satisfying love letter to the fans of the series. Others will find things to enjoy in the film but the flaws (lower budget, recycled plot points) will be hard to ignore.

Plot: First there was HOUSE OF A THOUSAND CORPSES. Then there was THE DEVIL’S REJECTS. Now, from writer/director Rob Zombie comes the next blood-soaked chapter in the most violent crime saga in history… 3 FROM HELL.

Review: There is a frequent occurrence in horror film franchises where no matter how dastardly the villain is, they will eventually become the beloved protagonist if the series runs long enough. It has happened with nearly every major horror franchise. Musician turned filmmaker Rob Zombie bucked this trend with his own franchise that began with 2003’s HOUSE OF A THOUSAND CORPSES and 2005’s THE DEVIL’S REJECTS. Zombie didn’t need multiple entries to turn the murderous “Firefly” clan, the focus of those two films, into characters he wanted the audience to root for. His heart has always clearly been with the monsters and that continues into the third, and latest, entry in the series – 3 FROM HELL.

3 FROM HELL opens with television news footage covering the closing moments of THE DEVIL’S REJECTS where the known remaining members of the Firefly family are gunned down on the highway by local law enforcement. The opening goes on to reveal that after months in intensive care, they all miraculously survived and were put on trial for their crimes, convicted, and sent to separate prisons. Fourteen years go by, when a relation of the family appears, “Winslow Foxworth Coltrane” (Richard Brake), who springs, the Manson-like, Otis (Bill Moseley) from captivity. The two then go on the run and hatch a plot to free the rest of their family.

The news montage that opens the film leans heavily into Zombie’s love for “grindhouse” aesthetics. It sets the stage for a more playful tone than the audience might be expecting from the film. 3 FROM HELL is less concerned with frightening the viewer than it is with entertaining them with nihilistic humor, bloody mayhem, and off-beat characters.

The film has an odd structure as well. From the opening on it never feels quite cohesive. 3 FROM HELL feels overstuffed with ideas: Otis and Winslow on the run and eventually in a hostage situation that gets accidentally interrupted by a party clown (Clint Howard), Baby Firefly (Sherri Moon Zombie) trying to survive in a hellish women’s prison, and Captain Spaulding (Sid Haig) being interviewed while on death row are all aspects of just the first half of the film. In the second half, the plot zeroes in on a vengeful gangster (Emilio Rivera) who wants the Fireflys dead. Any two of these ideas could have fully sustained a two-hour film but Zombie chose to put it all in and, at times, it is jarring, overwhelming, and even a bit of a retread from the first two entries in the series.

The film, clearly a labor of love for all involved, does have a few other large shortcomings though. The budget limitations make a lot of the finale feel smaller than it should and there is more CGI effects work than a film so into an “old school” horror vibe should have. As I stated earlier, a few story beats from the previous two films are recycled with diminishing effect. We have seen Otis psychologically and physically torment hostages before, for example. We’ve seen the Fireflys attacked by people seeking revenge for the carnage the family has caused in the past as well. While these scenes are enjoyable, it hurts the film’s overall impact seeing these beats play out again with a few different faces. Also, some of the action on display is over edited, perhaps to cover up the advanced age of some of the actors in what are very physical scenes near the end of the third act.

Speaking of age, one of the 3 FROM HELL’s biggest issues is the diminished role for Sid Haig’s Captain Spaulding. He’s not in the film nearly enough and considering how frail he looks when he is, it’s understandable. While Haig may be physically weaker, his presence is still strong and memorable. His absence through most of the film is to its detriment. Even having him do something as simple as providing occasional voice-over or inserting scenes from his character’s media interview into the back half of the film would have made 3 FROM HELL stronger.

What holds it all together though are the charismatic performances from all the leads. Otis and Winslow, for example, have several moments throughout the film where they get to banter and joke with each other. These improvisational-style scenes are incredibly fun. These moments also cause the audience to see the characters as Zombie sees them, not as monsters (which they are) but as odd-ball outcasts rebelling against everyday society. The same can be said of Baby’s character. When she is not carving up an unsympathetic victim, she’s looking for a sense of belonging with other misfits who understand her. It’s a stretch but the intent is there on the screen and the actors make it work beautifully. If the audience allows themselves to go along with where 3 FROM HELL wants to take them, by the end of the film’s runtime, they will find themselves rooting not only for the titular trio but for the actions they take against others. Actions that any other film would consider appalling.

3 FROM HELL is clearly meant for the fans. So, any flaws I mentioned are minor when the real joy of the film is getting to spend time with Zombie’s motley crew again as they joke and rampage across the screen. In that way the film fully satisfies. It never tries to justify or explain their behavior. 3 FROM HELL simply asks that you join along as the Firefly clan has a few new adventures and relives some of their “greatest hits” for your enjoyment.