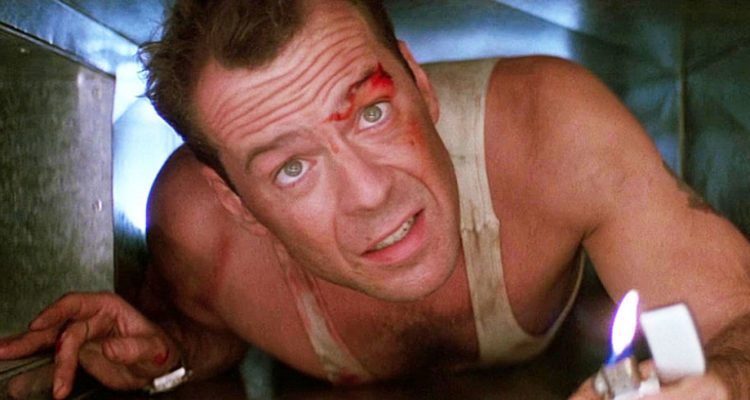 Watching the action classic Die Hard the other day, it dawned on me why I liked it so much. Yeah, it’s great to see Bruce Willis yippie-ki-yay around, taking on all the bad guys in his bare feet, and barely escaping peril every ten minutes or so. But for me personally, I’m also a strategy guy, and while watching it, I thought of the movie in a different way than before…mind you I’ve seen the movie a billion times, but that’s the great thing about re-watching movies, especially the great ones, you can and will discover new things and I did – what I discovered is, Die Hard is a really over-the-top chess game.

Now when I say “chess game”, I don’t want you to think that I’m picturing Bruce Willis on one side, Hans Gruber on the other and there’s a timer between then and they’re both seated at opposite ends of the table, deep in thought, chins resting on their fists while they stare at the board. It’s not a traditional chess game…think of it as you have John McClane on one side and Hans Gruber on the other. They’re facing each other down, moving their pieces into play, trying to outwit each other.

Gruber of course is playing a traditional chess game and you can see that in how he moves throughout the movie. He is obviously the king piece and thus, you almost never see him move from his location – like a traditional king. When he does move, checking on the bombs under the roof which let’s face it, is really a pawn’s job, he runs into McClane and almost loses the game, right then and there. Also, much like a king, he doesn’t get upset when he loses his pawn. Think of when Carl’s brother gets killed – the man shows no emotion. He doesn’t care. Why? He has more pawns and he knows he’s going to win. Surely no New York beat cop in bare feet is going to outmaneuver a man who has carefully crafted a brilliant heist, right? Think of it as a chess master who has studied the game for years facing a young upstart. Of course arrogance is going to be a factor.

Then you have McClane. Unlike Gruber, John is NOT playing a traditional game. He’s the opposing king, but he’s running all over the place, taking out pawns left, right and centre. Note that if a player on Han’s team doesn’t kill anyone, McClane doesn’t view them as a pawn and doesn’t kill them. Theo, the guy breaking into the vault? Knocked out, not killed. Theo’s assistant? Punched out and drops a stack of bonds, not killed. McClane is thinking in terms of a pawn as a piece that poses a physical threat to him – these men aren’t, therefore they are spared being permanently taken off the board. The guys with the guns are the true pawns and despite his status as king, he has to take them out.

He can’t do it alone though — when McClane first starts his game with Gruber, Hans has a larger army of pawns, right? So what does McClane do? He gets his own army of pawns, namely the LAPD and later, the FBI. Why? A chess game can’t be won if you don’t have pawns. McClane doesn’t think of them as pawns and acts when they get attacked, but they are essentially disposable pieces in the greater game between McClane and Gruber. When the FBI helicopter blows up, we don’t shed a tear…why? We don’t cry over pawns. Even pawns we like. This game is between the two kings and thus, any pawns can and will be taken off the board for the sake of winning the game.

When McClane acquires his pawns, Gruber tries to take out the opposing army with a rocket launcher. He’s playing a traditional game – that’s what you do, you systematically take out the other player’s army to checkmate the opposing king. Problem is, Gruber’s pawns are on the inside, while McClane’s are on the outside – Hans has to shift his attention to the exterior to deal with the pawns, allowing McClane time to find the positioning of Gruber’s pawns inside and whittle down Hans’ army. Think of when the rocket launcher is used on the LAPD armoured car, only for McClane to retaliate. Firstly, McClane neutralizes a powerful weapon in Gruber’s arsenal that he was not inclined to show unless McClane marshalled his pawns into action. Secondly, since to Gruber, the pawns are totally disposable , he’s unable to anticipate McClane’s actions. Hans doesn’t recognize that John isn’t playing a traditional game and therefore will not adopt the same attitude towards his men that Gruber has. This leads to a fatal flaw in Hans’ game, as he can’t recognize that he is playing with someone who does not have the same viewpoint on what tactics will be successful to win the game.

Of course, Hans gets smug at the end. He captures Holly, McClane’s “Queen” piece (though unlike most queens in chess, Holly doesn’t do much). However, as most chess enthusiasts will tell you, taking out the enemy queen equates to having the opposing player by the throat. In this case, Hans has again, severely underestimated the game that McClane is playing. He feels that with the Queen threatened, McClane will fold and concede the checkmate…but McClane is a king that acts, not reacts and thus, he improvises, appealing to Hans’ arrogance while concealing the weapon that ultimately wins the game for him. Hans could never have won the game though, as McClane has wiped out Hans’ entire army, leaving Hans with no choice but to act himself in the end – and like most kings in chess, Hans is extremely limited in the tactics he can employ when left to his own devices and is unable to anticipate a counter-move to McClane’s creative strategy at the end of the game. Thus, it is no surprise at all that McClane ends up the overall victor with a minimum of casualties – he has played an unpredictable, non-traditional strategy that kept his opponent off-balance since the game began.