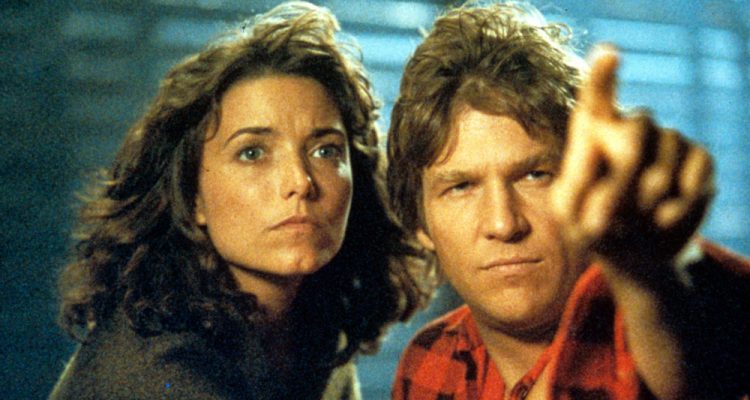 No Merchandising. Editorial Use Only. No Book Cover Usage. Mandatory Credit: Photo by Moviestore/REX/Shutterstock (1618475a) Starman, Karen Allen, Jeff Bridges Film and Television

Plot: Answering a NASA message intended for aliens, a space being tries to contact mankind, but an American missile grounds his ship. Scrambling, the so-called Starman (Jeff Bridges) inhabits the body of a late Wisconsinite and kidnaps the dead man’s widow, Jenny Hayden (Karen Allen). Determined to reunite with a vessel from his home planet at a predetermined site, Starman and Jenny travel to Arizona. Pursued by military officials trying to kill him, Starman forges a lasting bond with Jenny.

I think when people talk about their favourite John Carpenter movies they usually say Halloween, The Thing, The Fog or Escape from New York and so on. I don’t think I’ve ever met anyone who says that Starman is their favourite movie of his, which is a shame. After revisiting it recently I’ve really grown to appreciate it more as an adult and I think it would make for an entertaining double bill with Close Encounters of the Third Kind.

Bridges is perfectly cast as an alien in human form trying to learn about us as a species noting how we are “at our best when things are worst” which is my favourite line from the movie. He has real chemistry with Karen Allen who knows this isn’t her deceased husband but ends up falling for him anyway. Allen is very appealing in this movie in one of her best roles to date; when we are introduced to her she is watching a projector of her deceased husband while drinking wine so we immediately understand that she is grieving and struggling to move on with her life.

I hadn’t watched Starman for many years but picked it up on DVD a while back and was surprised how well it still stands up. Seeing how the military is prepared to greet our alien visitor with force seems pretty spot on in today’s ridiculous political climate making the movie seem even more relevant now.

Obviously the special effects are somewhat dated but a lot of them still look great and it has one of those earworm theme tunes that will stick in your head for hours after watching.

There is also plenty of action with several impressive explosions and even a fight scene with some rednecks.

There was one plot point which always bothered me though; the scene where Jenny hitches a ride with a guy from a bar to chaser after the Starman after he leaves her. So they catch up with him and this guy she has only just met agrees to cause an explosion to get the cops to chase after him so Jenny and the Starman can make their escape from the evil government types trying to capture him. That seems like an awfully nice sacrifice for a complete stranger to make for someone he only met like 20 minutes ago.  I mean, he’s probably going to be up on terrorism charges and face jail time for that.

Anyway, aside from that Starman manages to mix romance, drama, sci-fi and action together to make for an endearing movie which doesn’t go into any big philosophical debates but remains very charming. It may not be as great as some of John Carpenter’s other classics but Starman has a special place in my heart.