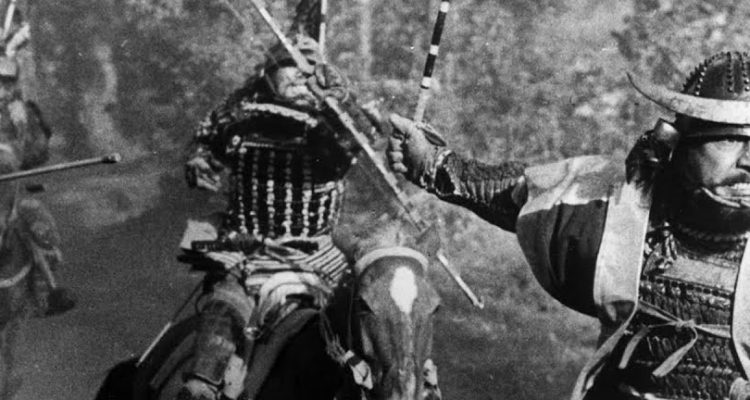 For fans of Shakespeare or Kurosawa, or people who just love great movies, this is a must-see, with great performances and a terrific atmosphere.

Plot: In feudal Japan, Washizu Taketoki (Toshiro Mifune) murderously takes his lord’s castle, but his bloody ambitions lead to a spiral of betrayal and violence.

Well, I studied Macbeth in high school and personally think it’s one of the bard’s best. The combination of supernatural hijinks matched with mortal ambition is tantalizing and enthralling – it’s one of those stories where you know things are just going to end badly, but you have to keep watching, the characters are written so vividly, and the drama is mounted so well. I’m glad Kurosawa picked this one of all of Shakespeare’s works to adapt into a film.

Let’s start with the performances – they’re fantastic. Toshiro Mifune cannot give a bad performance, and his intense work as the lead character captivates you throughout the film. While there is plenty of pomp and circumstance with this movie, my favourite scenes are where Mifune is just talking to another character (especially his wife – more on later). Just how he is lead astray from his morals at a suggestion, his face betrays that he was thinking the same thing – but didn’t want to say it out loud. Mifune owns this movie from his first appearance to his last stand.  My favourite character, though, is Asaji, his wife – just the way that Isuzu Yamada plays the part, she barely looks at her husband when she speaks to him, and there’s this slight smile on her face when she talks, you can tell that she knows exactly what she’s doing and she’s aware of how easily she can manipulate her husband.

The visuals in this movie are just… excellent. It’s shot in black and white, but you can tell there’s a real depth to the filming, and the atmosphere is tremendous. The movie was released in 1957, so I’m sure some snobs will chuckle and snidely remark on the “cheesiness” of the effects, but I found them charming and effective. There’s this rolling fog that seems to appear whenever a scene with a supernatural character takes place that adds a layer of disquiet to the proceedings, and the film seems to get darker and darker as Mifune’s character continues down his bloody path. The end shot was haunting to me, and when I think back on this movie (which I’m sure I will often do), I will think back to that scene most of all.

The music is also terrific; its poignant, relentless melody that greets the viewer at the beginning of the movie lets them know that something spectacular and unnerving is about to take place when they watch this movie.

There’s nothing more that I can say, really; this was a truly enjoyable movie-watching experience, and I cannot recommend enough that you check this one out.