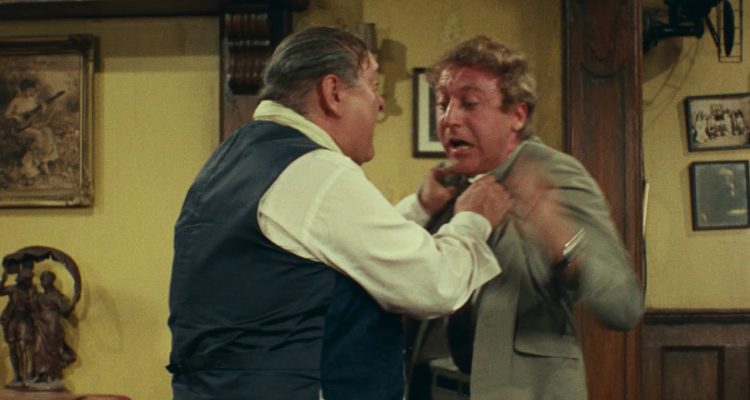 Plot: Sleazy Broadway producer Max Bialystock (Zero Mostel) convinces gullible accountant Leo Bloom (Gene Wilder) to help him enact a scheme to over-finance a play and then run away with the remaining money.

Review: It’s funny, I’m generally a Mel Brooks fan – I’ve seen just about all of his movies (the only one I didn’t was Life Stinks), and Young Frankenstein is one of my favourite comedies of all time – and yet this one, which was his first directorial effort and one of his most famous, I haven’t seen until now. I remember it was because my dad warned me off it when I was younger – “it has its moments, but Mostel and Wilder aren’t that good in it,” he said.

Well, my dad and I don’t see eye-to-eye on some movies, but on this one, I think he was mostly right. Let’s get this straight – The Producers is a very funny movie. There are some hilarious moments; pretty much everything Kenneth Mars does in the film made me laugh, their meeting with the prospective director made me laugh, Dick Shawn’s entire performance made me laugh and the preposterous opening to “Springtime for Hitler” made me laugh.  That’s a lot of laughing.

What didn’t make me laugh, though, is Mostel and Wilder’s schtick, especially at the beginning of the movie. Wilder spends a lot of time yelling his head off (and that gets old really quickly), and Mostel is just not funny – his role begs for a Phil Silver-esque performance, an oily conman who is evident in his deception but still somehow pulls off his schemes.  Mostel does a lot of mugging and eye-bulging, but not much else. As the movie continues and the ridiculous situations pile up, the film becomes funnier and funnier, but when the two leads are left to their devices, it’s not great.

I do think the movie, overall, is really good, though, and although I’m hesitant to call it a classic, it’s got a pretty decent premise and is zany enough to keep the viewer entertained. I think that speaks to Brooks’s sense of humour, which is ridiculous enough to cover up the flaws of the movie – its hard not to laugh when the Swedish secretary puts on music and dances every time Mostel orders her to “go to work,” and Dick Shawn has to be seen to be believed in his role as L.S.D. It’s a competent comedy that doesn’t click on all cylinders but is funny and clever enough for you to forgive its mistakes.