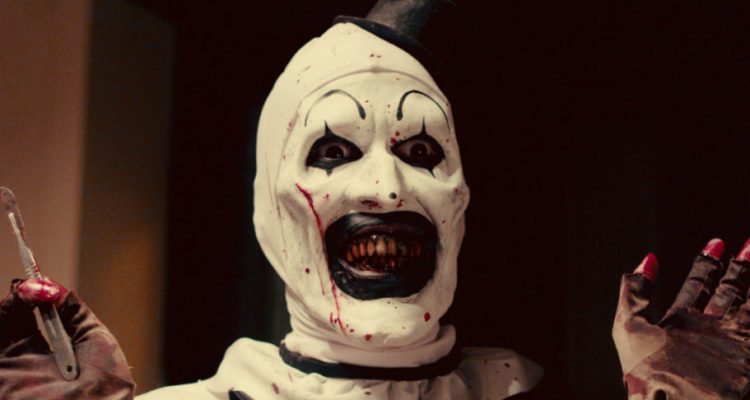 This is a cruel, ugly piece of work that I neither found entertaining or of any value, and it’s a blight on the genre.

Plot: A maniacal clown named Art, terrorizes three young women on Halloween night and everyone else who stands in his way.

Review: Late one Halloween night, a mime with murder on his mind (played by David Howard Thornton) prowls the dark streets of an industrial area and finds two young women to terrorize. First, he stalks them to all-night cafe, where he glares at them and creeps them out. Then he follows them back to their car, where he’s slashed their tires, forcing them to stay still. One of the girls (not realizing at first that the terrifier is near) goes to the warehouse nearby to use the toilet. She finds an exterminator doing his job, and he willingly unlocks the door so that she can use the facilities. Meanwhile, back at the cafe the mime slaughters the cook and his helper for throwing him out earlier. Heads are chopped off and made into jack-o-lanterns here. Later, the homicidal killer backtracks, snatches the girl waiting in the car, takes her to the warehouse and makes a big show of hacksawing her from bottom to top (in the film’s big, signature gross-out scene) in front of the other young woman, who is strapped to a chair and made to watch. The bound woman escapes (briefly), leading to a stalk and slash bit. Other characters arrive at the warehouse, encounter the silent clown, and are dispatched of in horrific and depressing ways. That’s about the sum of it.

Here’s the thing: I’m a sucker for a good slasher and other types of horror films. I know a good one when I see it, but I’ve also become accustomed at spotting the stinkers, and Terrifier puts off a stench. Writer / director Damien Leone has taken a character he created (the mime) and used in two previous anthology movies (All Hallow’s Eve and All Hallow’s Eve 2, both of which I’ve seen) and has fashioned a whole movie around this guy. This guy is grotesque and sort of reminds me of The Creeper in the Jeeper’s Creepers movies: He’s cruel, he’s unstoppable, and he’s pure evil. But this movie has a sick, no-hold’s-barred misogynistic bent that it wears gleefully on its sleeve. The female victims are stripped bare, nastily dispatched, and for what purpose other than to appeal to the grub worms out there who get off on stuff like that? It’s disgusting. The movie lacks suspense in every regard: Some of the kills come after only a few moments spent with the characters, and each kill is incredibly gruesome and gory. Purported to be a “throwback to the ’80s,” this movie doesn’t resemble any slasher or horror movie from the ’80s that I’ve seen or can recall. I’ve seen everything from The Mutilator to Scalps to Maniac and everything beyond and in between, but Terrifier doesn’t resemble anything from that period. If anything, it resembles the torture porn efforts of the last decade like Hostel, Saw, or the shot-on-digital indie efforts that have glutted the direct-to-video market. This is a cruel, ugly piece of work that I neither found entertaining or of any value, and it’s a blight on the genre. I’d expect them to make a sequel (they always do), but by then I’d hope that they’ve given their central villain some context for his rampages.

The Blu-ray from Epic comes stacked with extra features, such as an audio commentary by the director and Thornton (which I listened to), and plenty of behind the scenes features and trailers.