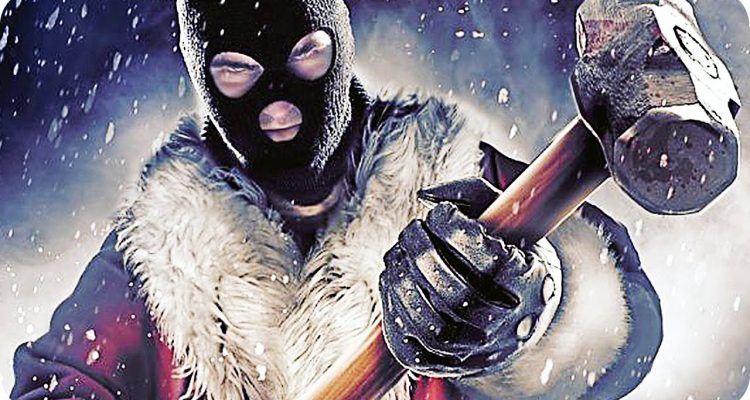 Fans of ultra cheap grindhouse horror may have a go at Secret Santa and get something out of it. I didn’t.

Plot: Secret Santa tells the story of a group of eccentric college kids, struggling to get through the hectic exam period. A liquor filled party is planned. Adding a Secret Santa exchange for fun. Little do our characters know – A killer is in town and has a special present for all the good (and bad) girls and boys.

Review: There’s nothing like a good seasonal slasher for the holiday season. That said, there’s nothing like a bad one, either. You know right away which of those two you’re getting before the credits even roll for Secret Santa, the latest attempt at no budget filmmaking that steeps its lowly head in the muck and mire of gross-out horror and never emerges. The story is the good stuff great slashers are made of, but with a crummy camera, non-actors, and a junky first-draft script the movie loses its most important battles before the war even begins.

A bunch of college kids are left on campus after the holiday break. They all seem to know each other and they convene for a Christmas party, not realizing that someone – or some ones – amongst them is a homicidal killer. When their secret Santa gift exchange begins, everyone is disappointed when they receive power tools as presents, or other weird sharp instruments that will ultimately be the utensil that slays them. The killings range from brutal (a girl gets her face pounded in with a hair dryer) to the gross (a whiny dude gets his boner chopped off with a scissors), and while that all more or less plays into the grimy pedigree of bad slasher films, you never care about these kids and there’s never a satisfying payoff with the reveal of the “secret Santa” killer or his or her motive.

Filmmaker Mike McMurran (who has at least three billed credits for the film) is to be commended for culling a cast of nonprofessionals to do what he asked of them. At least two of the young actresses disrobe on camera and die painfully on screen. That’s saying something. Eager beaver eaters of ultra cheap grindhouse horror may have a go at Secret Santa and get something out of it. I didn’t. If you celebrate Christmas and are looking for the next low tier of holiday horror, Secret Santa is the jagged lump of coal just waiting for you to grab.