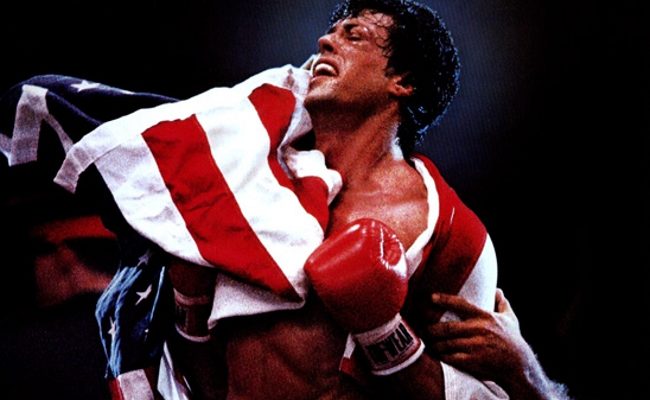 It’s probably the best sports series ever. If not, it’s at least the best series about boxing. A kid from the wrong side of the tracks in Philadelphia does the impossible and rises from obscurity to become world champion. His ascent to the top leads to tragedy and redemption, financial woe and an improbable comeback. I was never a fan of part V, and despite my affection for Rocky Balboa, I wanted to stick with the first four movies to figure out – just which one was the best? 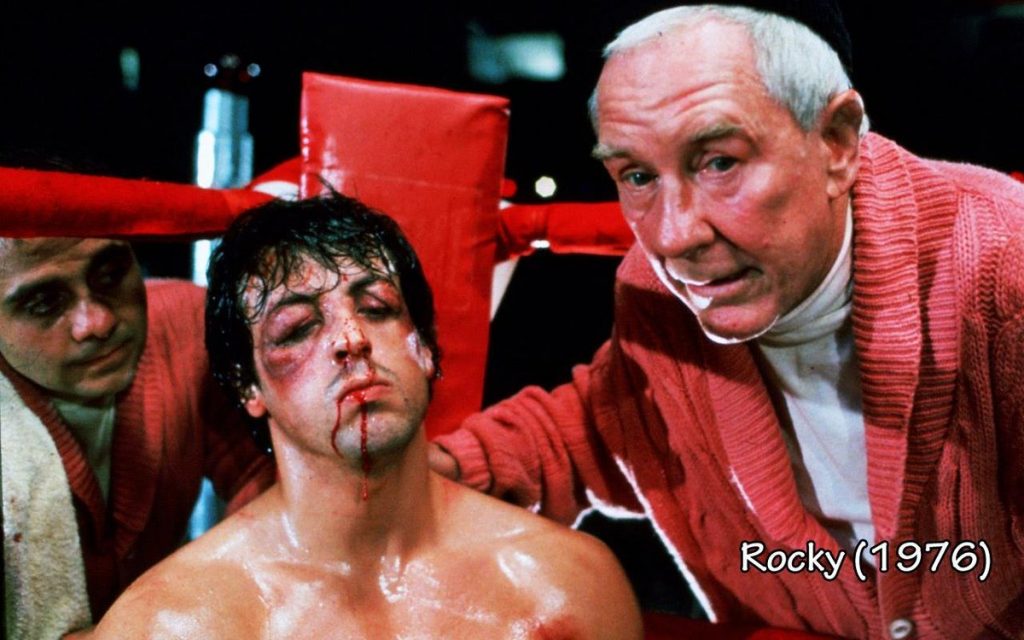 The story: A classic underdog story, Rocky is about a local boxer who is plucked from anonymity and given the opportunity to fight the heavyweight champion of the world. At this point in life, Rocky’s life is one of potential unfulfilled – despite his natural gifts, he does not take his craft seriously and works on the side as a collector for a local hood. However, when opportunity knocks, our hero trains his heart out, finds love and fights his heart out. What really is great though is the ending – a typical story of this type would have had Rocky emerge as the champ at the end, but instead, he merely takes the champ the distance. Throwing this swerve in makes the story more believable as even though we’re rooting for Rocky, we know in our heart of hearts, he can’t possibly win the match.

The opponent: Apollo Creed is the opponent in this one, and he oozes the arrogance of a man at the top of his game. We know that he’s taking Rocky lightly, which accounts for his problems at the beginning of the match, but fiercely recovers. Carl Weathers’ Creed walks that perfect line between being hated (for his arrogance and let’s face it, any of Rocky’s opponents would be hated when facing the Italian Stallion) and admiration for his obvious gifts. Despite his lofty status, it’s apparent that Creed had to fight hard to reach his pedestal, making him a worthy opponent for our hero. 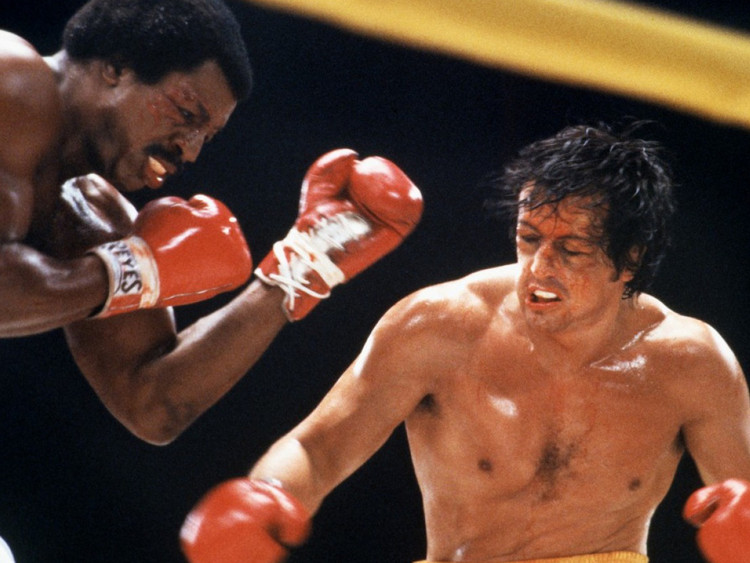 The story: A straight continuation from the first story sees Creed smarting from his close call over Rocky and demanding a rematch. When Rocky refuses, Creed uses some underhanded tactics to coerce Balboa into a rematch. Because the movie takes place directly after the events in part 1, it feels less like its own movie and more like the first and second parts of the same story. While I like the idea of continuing on, this movie in a way undoes all the work that the first movie made, by having Rocky win the championship. While satisfactory to some viewers, to me it was a given that Rocky would win over Apollo – why else do the movie? This takes some of the intrigue and mystery out of the movie, as it just appears the story is making up for the fact that Rocky didn’t beat Apollo in the first film.

The opponent:  Apollo Creed returns to face Rocky in this one, and unlike the first film, it feels like Apollo is more of a straight bad guy in this movie. He insults Adrian and Rocky on national television, and his obsession with facing Rocky is bordering on the obsessive. You don’t really admire the character in this one, though you could compare his behaviour to the act of a wounded lion who realizes his leadership of the pride has been shaken and is trying to prove as much to himself as to everyone else that he’s still on top. I just wish it was done in a more subtle and less overt way. 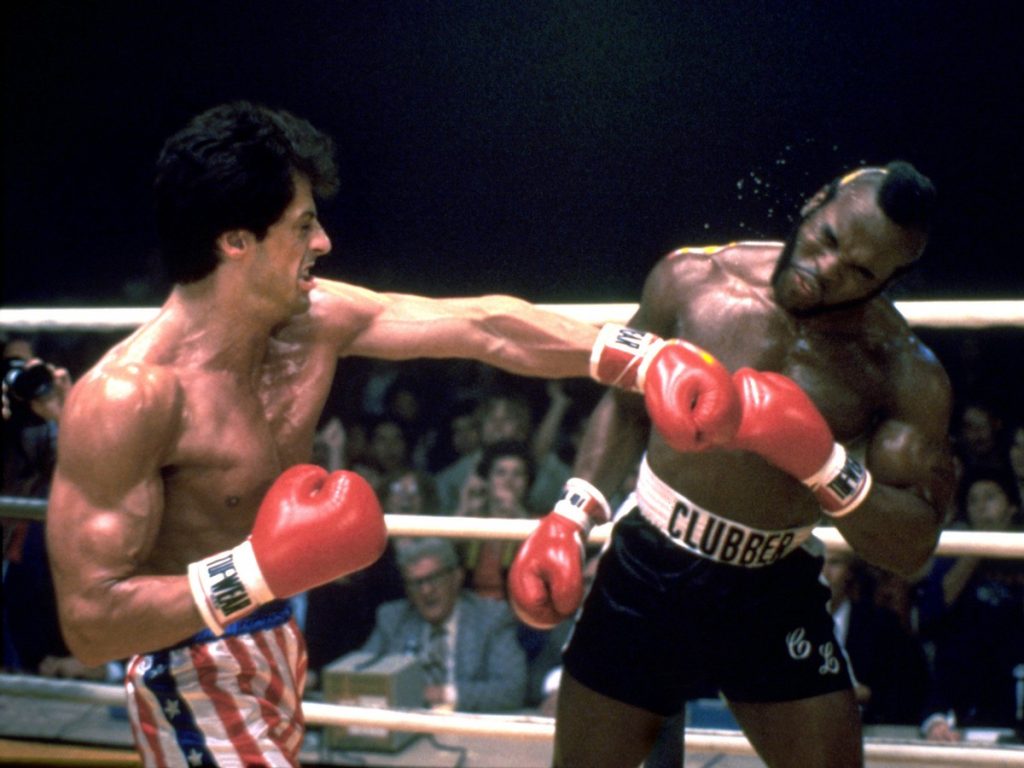 The story: This movie sees Rocky basically switching places with Apollo Creed. He’s now the comfortable champion who is easy plowing through opponents and having exhibition matches with wrestlers. Meanwhile, a new, hungry contender has burst on the scene and is ready to make his mark. Having Rocky become the confident champion was a stroke of genius and having Apollo Creed train Rocky is an unbelievable masterstroke. You begin to understand what makes Apollo tick in this one, while he helps Rocky regain his “Eye of the Tiger” (the soundtrack is brilliant, by the way). My single complaint about the movie is the melodramatic death of Mickey; while I understand you couldn’t have Mickey train Rocky with Apollo, it was a bit unnecessary as you don’t need any more reason to hate Clubber Lang.  You already want to see Clubber get his comeuppance as he beat the tar out of Rocky – you didn’t need it to get to that level of personal.

The opponent:  Mr. T plays Clubber Lang in this one, and the movie masterfully plays him up as a vicious and scary opponent. Lang is ferocious in the ring, and during their first meeting, it’s evident that Rocky is massively over-matched. Clubber in the archetype of the young, hungry fighter who evidently has been working towards this goal his entire life and he is ruthless in his pursuit of the championship, hence his frenzied actions that result in Mickey’s death.  You want to see Clubber get whipped in the ring and when Rocky beats him at the end, you feel satisfied – but unfortunately, those actions still won’t bring Mickey back. 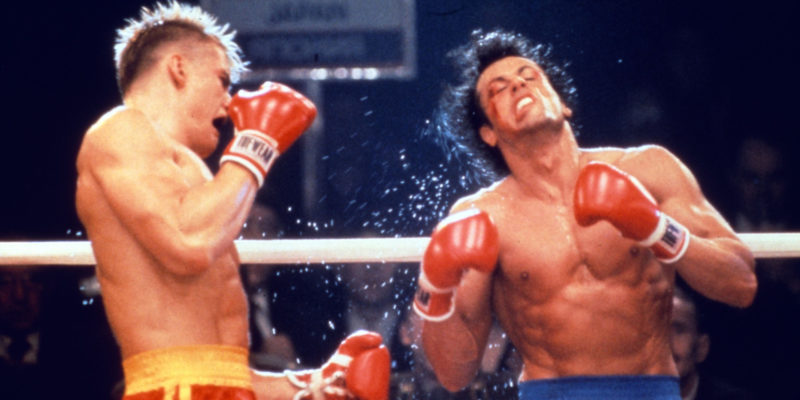 The story:  Fighting now for national pride, as much as vengeance, Rocky returns in the fourth installment to face a formidable Russian opponent who took his best friend from him. Apollo’s death in this one is done more tastefully than Mickey’s was in part III, with Drago pummeling the former champ to death. In a way, it’s a mirror for the result of the initial Clubber/Rocky bout and highlights what danger Rocky put himself in when facing a superior opponent without the proper spirit.  From there, it’s an old-school vs. new-school approach between the two fighters, but you feel like this is more than a fight between two well-conditioned athletes; this feels like a battle for supremacy between the U.S. and Russia. As the cold war was still alive and well during this time period, it’s a testament to Stallone for taking something topical and relevant and naturally slotting it into this story, giving Rocky something new to fight for. Though he wins the fight at the end, you have the idea that he lost as much as he won, as Apollo was the last boxing mentor that he remained in his life.  From now on, in the boxing world, he truly has to go it alone.

The opponent: Undoubtedly the most formidable of all of Rocky’s opponents, Ivan Drago appears to be more machine than man. His cold indifference and ridiculous strength seem like an insurmountable challenge for Rocky. In some ways, Rocky is right back to where he was in the first film, training for a challenge he can’t possibly win.  Impossibly, Rocky topples the big Russian, but I felt that despite the awesome preparation that Rocky put into the fight, it was by the skin of his teeth. It was more the Russian’s underestimation of the fighting spirit of his opponent (a recurring theme throughout the series) more so than Rocky’s physical skills that allow him to topple the Soviet titan.

The verdict: This is a truly tough comparison, but I have to give the nod to the original. Despite the fact that it’s been a well-tread story of the underdog rising up, there’s nothing wrong with a story like that, and at least it was just different enough to avoid sappy sentimentality. The second one doesn’t feel like its own film, and Mickey’s death felt like the third film went too far. As for part IV, while it has the best opponent of Rocky’s career, it’s Cold War rivalry setting  could allow for the story to become a bit dated over time, a circumstance that the original should be able to avoid.