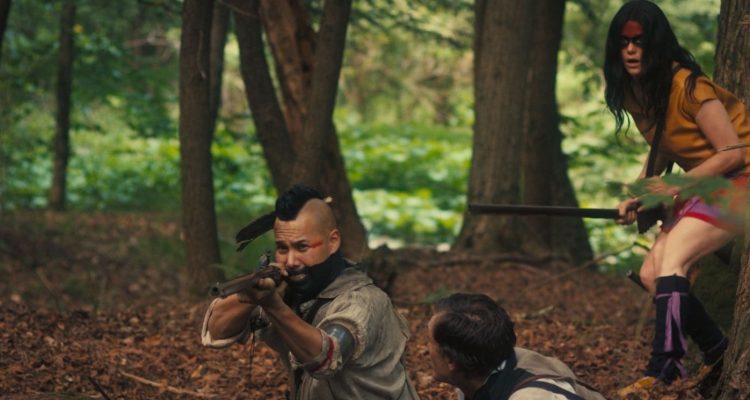 It almost feels like a stage production or a LARPing session captured on film. I’m not really sure who this movie is for. Is it for action fans or gore hounds? Maybe a little of both, but neither will be entirely satisfied.

Plot: Late in the War of 1812, a young Mohawk woman and her two lovers battle a squad of American soldiers hell-bent on revenge.

Review: A young Mohawk woman named Oak (Kaniehtiio Hora) and her two male companions Calvin (Justin Rain) and Joshua (Eamon Farren) are pursued through the unforgiving forest by a vengeful colonel in the American Army and his platoon. They want their blood because a member of her tribe set fire to their camp, killing American soldiers. With their muskets at the ready, the colonel – a spiteful, evil son of a gun named Hezekiah (Ezra Buzzington) – and his team track Oak and her company, capturing them and torturing them, but Oak escapes, turning the tables on Hezekiah and his clueless, fearful men. Oak becomes an empowered warrior, full of supernatural fury and devastation, and Hezekiah must face her alone after she’s weeded his army out.

From director Ted Geoghegan, who made the stellar horror film We Are Still Here, the period piece / action-horror genre experiment Mohawk is an uncomfortable amalgamation of mood, gore, startling violence, and relentless unpleasantness. There’s a good, fascinating movie here somewhere, but the script (by novelist Grady Hendrix and Geoghegan) is clunky and weird, while retaining atmospheric dread. The action and the staging of the action is sloppy and confounding in its presentation, and once the heroine fully emerges as the force of nature the movie wants us to believe she is, the movie has lost all of its goodwill towards her and whatever happens to her. The movie also has incredibly clean looking cinematography, which I found to be a distraction. Geoghegan’s first film We Are Still Here managed to evoke another time and era with its spooky cinematography and staging, while Mohawk looks and sounds like a student film with its too-sharp lighting and execution. It almost feels like a stage production or a LARPing session captured on film. I’m not really sure who this movie is for. Is it for action fans or gore hounds? Maybe a little of both, but neither will be entirely satisfied.