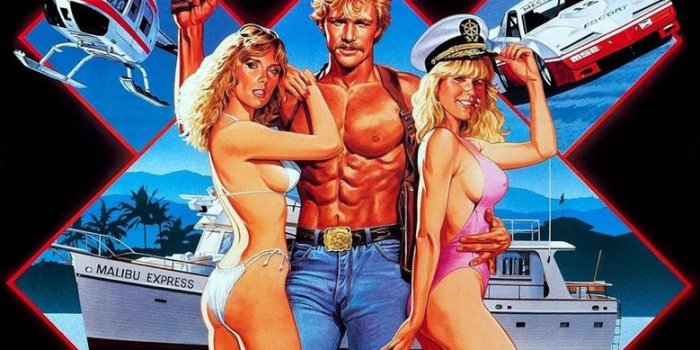 “Would I help any woman in distress? Yes, ma’am, I would.”

Review: The Malibu Bay Films era officially begins with 1985’s Malibu Express, the third film from the legendary Andy Sidaris after Stacey (1973) and Seven (1979).  What started as a bit of a stylistic fireworks display in the previous two movies, the approach used in Malibu Bay Films cranks everything up to what amounts to an octane truck explosion of gratuitous nudity and colorful, sexy characters.  Essentially a storyline remake of Stacey – the first Sidaris film – this version features a male protagonist, the easygoing chick magnet private investigator Cody Abilene (Darby Hinton, Firecracker) along with the sultry Contessa Luciana (Sybil Danning, The Panther Squad) among many other ultra attractive women desiring Cody’s affections.  The plot is roughly the same, with some additional twists and tweaks: a threat to national security is uncovered when computer microchips are being sold to the Russians in some kind of espionage plot, on top of various other incidents of blackmail, adultery and murder occurring within the household of Lady Lillian Chamberlain (Niki Dantine, The Concrete Jungle).  Secret agent Contessa Luciana sends Cody in to investigate, which leads, of course, to plenty of revelations involving gunfights, explosions and car chases.  However, these events mostly happen in between (or during) Cody’s sexual interludes with numerous women, maybe only half of those directly involved with his investigation, uncovering plot elements and breasts at once. 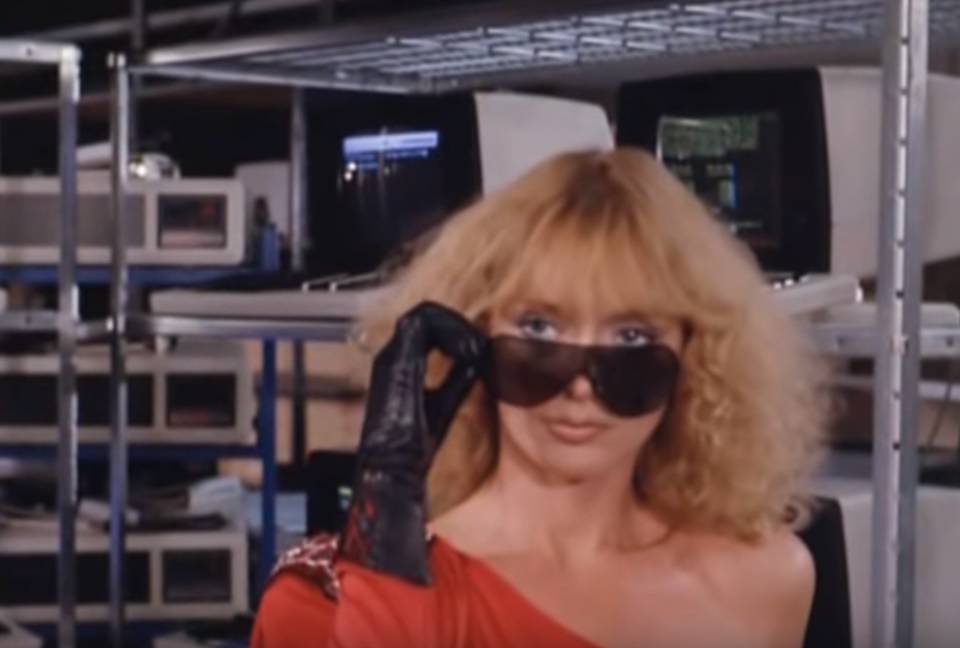 Malibu Express is basically a Stacey remake in the realm of Malibu Bay Films.  Stacey was about murder, mayhem, and mystery coming together with beauty, bullets and boobs, but Malibu Express adds exponentially more boobs and throws in some Russian tech espionage with a slight Pink Panther feel.  Like Stacey, the plot takes a backseat to the style, with the same Playboy pipeline as before.  Unlike Stacey, there is a wider variety of memorable characters, as well as coherent narration, far more coherent than the actual, overly contrived plot.  In addition to the presence of far more humor, one key difference between 1985’s Malibu Express and Stacey from 1973 is that, unlike the latter’s titular namesake, those personality traits from the protagonist are essentially split between Cody Abilene and government agent/femme fatale Contessa Luciana.  Cody is a less serious leading character, more Clouseau than James Bond, and far from being as perfect as Stacey Hanson – he’s a bad shot with a gun and a less than spectacular streetracer, with the female supporting characters backing him up in tighter spots.  Still, his aloof nature, cheesy improvisational quips and cocky self-assuredness all seem to resonate with the ladies, engaging in sexual relations with over half a dozen different women in the span of under 2 hours, though obviously not in real time.  The expanded but convoluted story is made all the more difficult to follow with so many breaks for the sex scenes, with more of a pace set by boobs alone than any plot twists, although it could be argued that perhaps the plot will be taken far less seriously by the average viewer.  There are some instances where the girls appear to be mugging directly to the camera or seemingly disrobing for only the viewer’s eyes, making those scenes seem less like a movie than a centerfold video when combined with the Henry Strzelecki soundtrack. 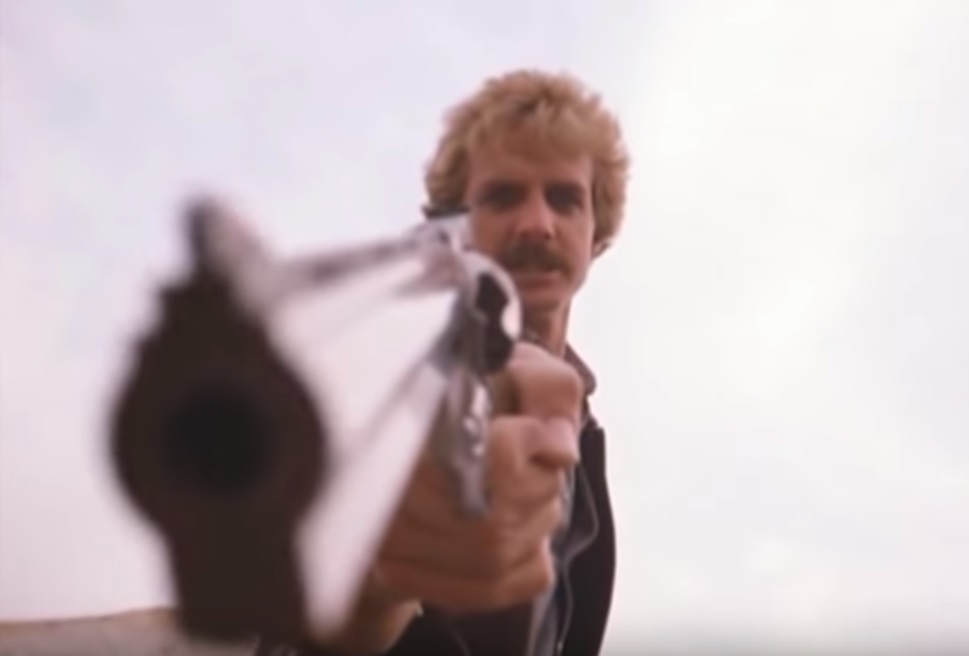 If the Sidaris films prior to the Malibu Bay Films era were about taking a stylistic shot at creative cinema, Malibu Express starts right up by unloading a cult classic machine gun for an audience craving exactly what it delivers.  It is exactly the kind of weapon fired by characters in future Sidaris films, probably while posing provocatively.

Available on Blu-ray, as well as on DVD as part of the Girls, Guns and G-Strings collection from Mill Creek Entertainment. 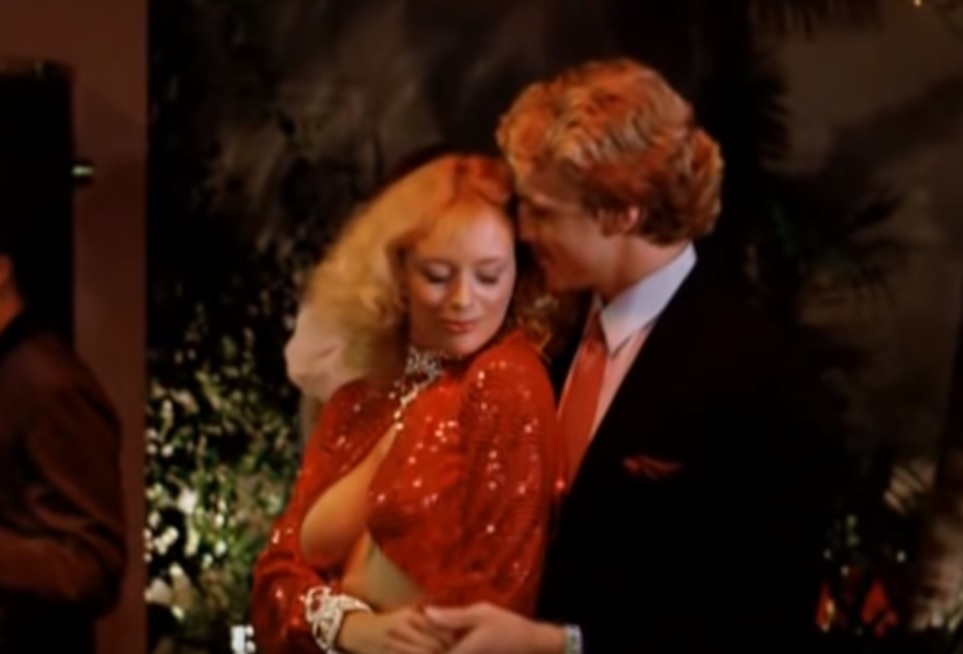