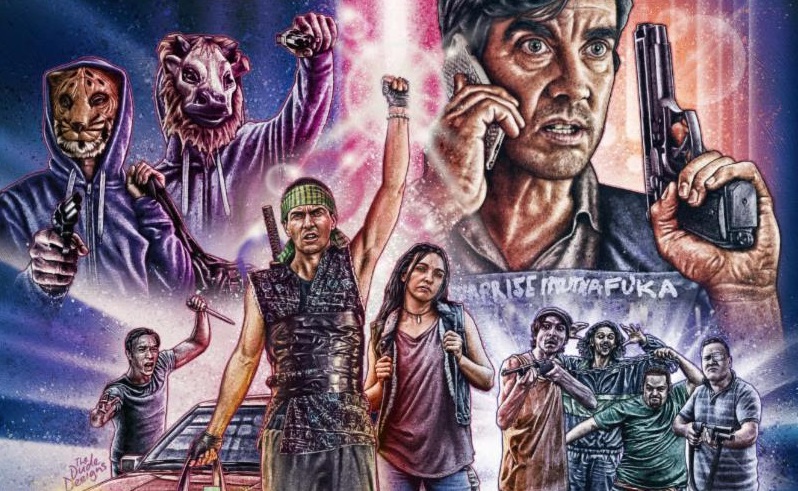 For about half the running time (it’s only 80 minutes long), I was frustrated by the idiocy of the dumb characters, but when it became clear that the movie hinged upon the stupid behavior and language of these lunatics, I tried to settle into the languid groove of it all.

Plot: John steals money and a bracelet/temporal dislocator from a Chinese antiques shop. Fleeing, he triggers the device and goes minutes back in time. The time travels result in new Johns and they form the Mega Time Squad.

Review: An idiot named John (Anton Tennet) works for a local crime boss, who orders him to go steal a bag of money from a Chinese shopkeeper in town, and John accomplishes the task with some … complications. While he takes the money, he also robs the shopkeeper of an ancient bracelet that allows him to time travel several moments into the past. Not realizing what he has, John is visited by his future self in a critical moment, and he tells himself to use the bracelet at the right time, which he does. He averts his own death, but as a consequence he is stuck with a duplicate of himself, as the bracelet doesn’t allow jumping back to the future. Being an imbecile, John ends up going back in time on multiple occasions to try to pull a fast one on his boss to steal the money from him, creating a multiplicity of copies of himself in the present time. With more than a half a dozen Johns all out to steal the money and maybe win the heart of a young woman who works for his boss, the original John has created for himself a massive amount of rivalry and competition … in himself. Visiting the Chinese shopkeeper for answers on how to handle his predicament, the man tells him that by going back in time so many times, he will unleash an ancient demon that will hunt him down, and when John realizes what that means, he’ll have a ridiculous task of cleaning up his mess if he’s going to survive.

Shot on a shoestring with some clever photography, the New Zealand comedy caper Mega Time Squad needed to have a much tighter reign on its script, as writer / director Tim Van Dammen allowed an absurdly loose structure for his moronic characters to run around in. For about half the running time (it’s only 80 minutes long), I was frustrated by the idiocy of the dumb characters, but when it became clear that the movie hinged upon the stupid behavior and language of these lunatics, I tried to settle into the languid groove of it all. By the end, I’d kinda enjoyed it, but it shouldn’t take that long – even in an 80-minute movie – to get into it. This is an incredibly low tech science fiction film, and there are some out there who might enjoy it. It’s not quite a sleeper of a film, but it’s mildly amusing.

Dark Sky Films recently released Mega Time Squad on blu ray and DVD, and it comes with an audio commentary by the director, deleted scenes, and a trailer.