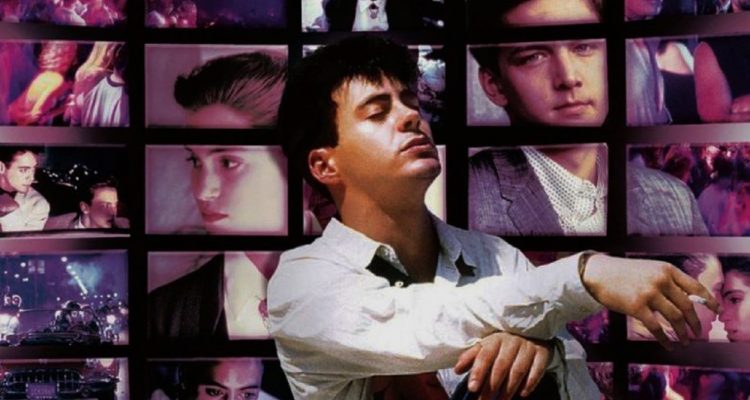 Thomas Newman’s score to Less Than Zero is a unique and melancholic affair which is a must have for fans.

Review: Upon high school graduation, rich kids Clay (Andrew McCarthy), Blair (Jamie Gertz), and Julian (Robert Downey Jr.) have high hopes and great prospects. Clay and Blair plan on taking six months off before college, and Julian is given a sweet gig by his father, who runs a record company. In six months, everything falls apart: Blair cheats on Clay with Julian, who has begun spiraling out of control with substance abuse. Julian has squandered his father’s good will and has run himself over fifty thousand dollars of debt to his drug dealer Rip (James Spader). It’s gotten so bad with Julian that he becomes homeless and stoops so low as to pimp himself out for a quick fix, and Rip’s enforcers are out to get him. Blair summons Clay to help her get Julian some much-needed support, but Julian is toxic and can’t be helped. With a good heart and a firm resolve to help his friend any way he can, Clay tries an intervention (while navigating the perils of dealing with Rip), leading to a realization that he might be too late.

Based on the book by Bret Easton Ellis, Less Than Zero perfectly encapsulates the high-class drug scene of the 1980’s with teenagers trapped in the middle of it. As directed by Marek Kanievska, it evokes a chilling sense of youth circling down the drain. The performances (particularly by Downy Jr.) are outstanding. This is the complete flipside to the sort of thing John Hughes was doing at the same time. It’s depressing and should leave you feeling lost. The film is beautifully photographed by Edward Lachman, and nicely scored by Thomas Newman, whose starkly evocative and dreamlike score should stimulate the sense of cinematic style that filmmaker Kanievska was going for. Long unavailable, Newman’s very unique and melancholic score has finally been made available thanks to La La Land Records, which has just released the whole score onto CD in a limited edition (only 1500 units were produced) pressing. Fans of Newman’s and fans of the film should definitely grab one of these before they’re gone.