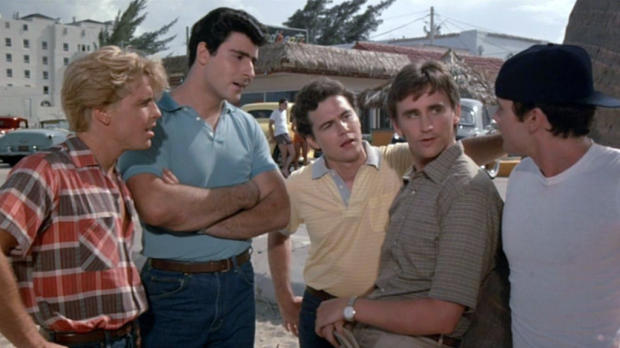 Both films are really just cash-ins and part 3 has less character development for the key players but the Blu-rays are well remastered and both films are perfect for fans of 80’s sex comedies.

Porky’s II Review: After a quick recap of the first film, The Next Day begins with high schooler Pee Wee (Dan Monahan) a little more confident and assured now that he’s officially been laid by Wendy Williams (Kaki Hunter), who truly considers him a really cool guy. His pals Schwartz (Scott Colomby), Tommy (Wyatt Knight), Billy (Mark Herrier), Mickey (Roger Wilson), and Tim (Cyril O’Reily) are still pulling pranks on him, and the latest goof has them all pulling a gag on him at a cemetery where they pay a stripper to pretend to have a heart attack while having sex with him. In the meanwhile, Pee Wee and his pals are starring in the big school play, a production of Shakespeare’s A Midsummer Night’s Dream, which is protested and picketed by the girls’ coach Ballbricker (Nancy Parsons) and a local Bible-thumping bigot, who takes offence that the school has cast a Native American boy in the lead. The fanatical (but hypocritical) zealot calls on some Klu Klux Clan members to help him ruin the school play, but with Pee Wee and his pals on the job, they royally ruin the preacher’s plan and keep the play running.

With nary a sight of the original villain Porky, The Next Day generates a few chuckles along its way to a robust and hilarious finale where Wendy (played by the sweetly appealing Kaki Hunter) pulls a major prank on a local politico, who thinks he’s going to get laid after taking her to a posh restaurant. The whole gag lasts at least 15 minutes and it gets funnier and more robust as it goes along, but the whole scene rests on her shoulders, which is pretty fantastic considering that the male leads don’t even show up until the gag is just about over. As a coming of age comedy, this isn’t where it’s at, but for a silly little comedy to a smash-hit movie, it ain’t half bad. Bob Clark wrote and directed it. Oh, and if you pay attention you’ll see a cameo by the leg lamp featured so prominently in Clark’s A Christmas Story, which was released the same year.

Porky’s Revenge Review: With Angel Beach high school graduation looming and the big national ball game coming up, Pee Wee (Dan Monahan) and his pals Meat (Tony Ganios), Billy (Mark Herrier), Tommy (Wyatt Knight), Schwartz (Scott Colomby), and Wendy (Kiki Hunter) just have to make it through the semester without bungling their chances at loosing the game. When their old nemesis Porky (a returning Chuck Mitchell) rigs the Angel Beach team to lose so that he can make a bundle, the old gang has to come up with another crazy plan to bring his empire – no longer a rowdy roadhouse, but now a swanky riverboat – crashing down around him. Along the way, the kids right a wrong they committed against the girls’ coach Ballbricker (Nancy Parsons), and Pee Wee has recurring nightmares about appearing naked in front of the whole graduating class. Sometimes, dreams do come true.

Even more of a cash-in than the second film in the series, Porky’s Revenge barely feels like a period piece this time around. The synth rock score and contemporary source songs (especially the end credits song) really upset the balance of what still should be a series set in the 1950’s. Aside from the period cars and a few wardrobe choices, this film feels like a teen sex comedy set in 1985. It even casts a Playboy Playmate of 1984 – Kimberly Evenson – in a key sexpot role, which is great, but she looks too modern to fit in the Porky’s universe. There’s less character development for the key players, and Pee Wee never really talks about getting laid in this entry. The plot is on autopilot, and most of the actors are a little less than energetic this time around. Kiki Hunter’s character has all of a sudden become one of the guys, which is odd, but probably the most interesting aspect of the whole picture.

Kino Lorber has just released a double feature of these two outings, and the disc really hits the spot, especially for completists. The third film had only been released once on DVD, and it was only available in the box set of Porky’s pictures, so this is a sweet way to grab these underrated flicks on high definition at the same time. The transfers are good, and should make fans of these films – and ’80s teen sex comedies – very happy. Kino Lorber just can’t be beat.