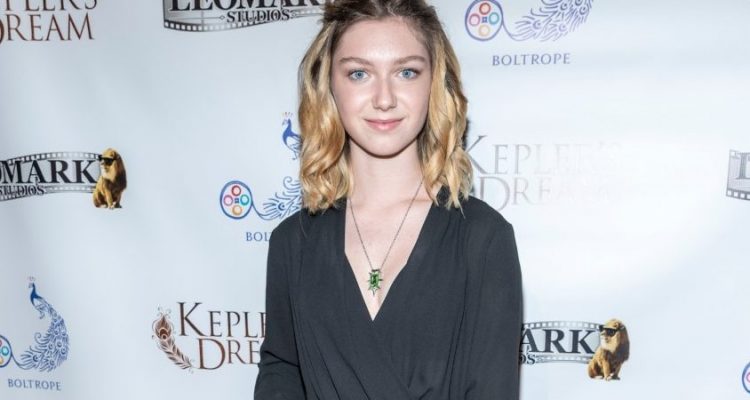 In the new film Kepler’s Dream (showing in select theaters and available on InDemand), Isabella Blake-Thomas plays eleven-year old Ella, a young lady who is whisked off to live with her grandmother when her mother launches her last-chance medical “mission – all alone” against her leukemia. Ella dubs Violet von Stern’s (Holland Taylor) isolated adobe ranch “The House of Mud.” She thinks of it too as “Broken Family Camp” and “The Good Grammar Correctional Facility.”

Sparks fly between the steely “GM” and her strong-willed granddaughter, but the theft of a treasured rare book from the GM’s library sets events in motion that reveal secrets, betrayals, and sorrows that have shaped the family for generations.

Ella, like the North Star for her grown-ups, helps point the way to resolution as she draws strength from the constellation of love formed by her grandfather’s legacy, the bonds of friendship with Rosie, Miguel’s daughter, and her own fighting spirit.

We spoke to up-and-coming actress Isabella Blake-Thomas about the movie.

Izabella, congrats on “Kepler’s Dream” – how did it come about?

l was attending a film festival called Cinequest in San Jose and l was approached by two students who said l would be perfect for this film they were working on with their teacher. l met Amy and she screentested me and that was it. l had the job.

I’ve seen the film compared to the likes of “The Secret Garden” – is that a good comparison?

It’s a lovely film for young children. Nowadays films have too much violence and swearing and so it’s nice to be part of something that has an innocence about it. l feel a bit like a detective!

Such an amazing cast in this one, who did you work with the most?

Holland Taylor most of the time followed by Kelly lynch and then Sean Patrick Flanery.

Kelly was wonderful to work with as she behaved just like a mum. It was very hard to see her as an ill Mum in the hospital.

I bet. And what’s the message of the movie?

I think it’s about family and how important family is.

l am inquisitive like Ella. l would definitely search for something if it was stolen or lost. l would also miss my mum terribly if l had too away from her.